Sailing the Amazon River – Colombia to Peru by Boat

After leaving the gorgeous countryside surrounding the sleepy town in Salento, we had only a very brief stopover in Cali (which wasn’t long enough to see anything particularly exciting) before catching a flight early the next morning to the border town of Leticia, way down in the bottom right corner of Colombia: in the heart of the Amazon rainforest.

We had wanted to travel completely overland, with no internal flights, but there are no roads in the jungle and there was no other way to get to Leticia.

The two overland options we had for leaving Colombia were by bus through Ecuador, which would have been such a rushed trip that it seemed a little wasteful, or by boat down the Amazon river into Peru.

The second option sounded far too romantic to miss, so we opted for a short flight from Cali to Leticia via Bogota, and hopped straight from the green, cloudy countryside of the Andes into the vibrant and dazzlingly bright Amazon rainforest.

Sailing the Amazon River: Day One

I could smell it as soon as we stepped out of the plane at Leticia’s tiny airport; under the oil and engines were the scents of hot, wet leaves and damp earth, rich and woody.

The sun was blindingly bright and wickedly hot, the air was thick and humid, and the small airport was surrounded by a wall of green and brown: the edges of the endless, continent-sized blanket of emerald green we had glimpsed from the plane window.

At the airport, we asked a taxi driver to take us to the ticket office for the ‘rapido’ – fast boat – to Iquitos in Peru, but when he said that the office was in Brazil we decided he must be completely insane and instead got out in Leticia’s town centre.

After an hour or so trying unsuccessfully to locate a ticket office, or an English speaker to give us some advice, we finally asked another taxi driver who confirmed what the first guy had told us. The ticket offices to buy tickets from Colombia to Peru are, of course, in Tabatinga, Brazil. As it turns out, this is less than a five-minute drive from Leticia’s centre, with no border control. Halfway down a normal-looking road, the driver said “we’re in Brazil now”, and that was that.

Having bought our tickets and moved from Colombia to Brazil and back again in less than twenty minutes, our taxi driver dropped us at the edge of the river and pointed out the ferry boat to Santa Rosa.

This is Peru’s border town and the boats to Iquitos set off from here. We sailed across the river in a small motorboat – wowed by an incredible scenery of coffee-coloured river lined with a belt of green and suddenly struck by the thrilling notion that we were in the Amazon – to grab a Peruvian entry stamp at the tiny immigration office, where we had to step over a sleeping dog to reach the desk. At some unclear point before or during the river crossing, we had entered Peru, so that in the space of one hour we had been in three different countries.

Once we were completely organised, and the stress of not having a clue what we were doing had died down, we felt much better and decided to enjoy our first evening in the Amazon. We met a local tour guide who offered us an evening tour to spot wildlife, so we decided to do that (only realising later that the 100,000 COP pp – about £30 each – he charged us was a huge rip off).

He commissioned a local boy with a motor boat and we hopped in, setting off down the Amazon river as the sun was beginning to slip down the enormous expanse of sky that stretched over the low, flat landscape, lighting the sculpted clouds in red, gold, purple, pink.

The river was unbelievably wide, more like a lake, the colour of milky tea, and skirted by thin bands of green on either side that were thick and broodingly, silently alive, so rich with mysterious life they seemed to pulse with it even as they stretched, still and silent, into the distance.

Suddenly, breaking the water and curling over in the golden light of the sunset, the dark shadow of a dolphin appeared, slow and graceful, quite close to our boat.

Too dark and too quick to tell if it was pink or grey, but smooth and beautiful in the dying light. We sailed upriver for an hour or more, and spotted more dolphins, only occasionally and always too quick for my camera, breaking the surface in tightly curled dives.

Eventually, we stopped at a small village of wooden, stilted huts – many of which had only three walls – just as darkness was beginning to settle. The forest had become an impenetrable shadow and the sky was a dark bruise of blue clouds.

The villagers quickly surrounded us, a group of women and children holding animals for us to pet, hold, or stagger back from. A pig-nosed prehistoric turtle, warty and weird with a flat, spade-shaped head. Baby caimans with their calm smiles and cold, intelligent eyes that seemed to watch us knowingly.

A little boy with huge dark eyes held a baby monkey on his shoulder, but when Sam held it the monkey wriggled and raced over him, trying to bite. A big sloth that sat still like a teddy bear and let us hold him without moving, smiling like a stoned teenager, a scruffy porcupine coated with needles, two anacondas whose strength I could feel as I held them on my shoulders.

Now it was night fully, and we walked with the guide first to a lake filled with huge lilypads, then to a big paddling pool home to a baby manatee, which looked like a swimming pig with thick, spiny hairs dotted across its head.

It circled the pool restlessly and poked its strange, slippery face up to look at us, and I hated to see it away from its mother in a too-small pool, wondering if it was properly cared for. Although it was cool to see so many animals up close, I hadn’t been expecting to see them in captivity, domesticated and docile, and it wasn’t quite the tour we’d hoped for.

We sailed back to Santa Rosa down a dark river, watching flashes of lightning tear across the sky in the distance, lighting the horizon in every direction as though we were surrounded by storm.

The trip was beginning to feel like a true adventure; everything since stepping off the plane had been as surreal and as strange as you’d expect a day in the Amazon to be.

We were in the rainforest, and although the Amazon was exciting and mysterious it was also humid, uncomfortable, and strange.

The overland route from Colombia to Peru, down the Amazon River from Leticia on the Colombian border to Iquitos in the heart of the Peruvian Amazon, sounded so romantic and adventurous that it was impossible to resist, but the realities of it were difficult – adding to the adventure but also causing a bit of stress and taking some of the thrill out.

After a few hours sleep in a horrible – but very cheap – hotel room, where the electricity cut out in the night leaving us with no fan, so that we slept fitfully and drenched in sweat, we were woken by a loud knocking at the door. The hotel staff insisted that we had to leave for the boat at 2am, although our tickets confirmed it left at 3:30am and that we needed to be at the port (directly opposite our hotel) for 3am. Even when we showed them the tickets, the staff still insisted we leave, with such concern and urgency that we assumed the boat times must have changed.

So, we stumbled out into the darkness with our heavy bags, bleary eyed and sick from lack of sleep, and onto a small wooden deck with about thirty other passengers, most of whom were asleep, beside a silent and unstaffed Transtur boat. Of course, it wasn’t leaving until 3:30am, and they didn’t start boarding until 3:25, so we sat for over an hour in the stifled, humid darkness, confused and very, very overtired.

Sailing from Colombia to Peru

Eventually, though, we were on the boat – a narrow, bus-like motorboat with too many seats crammed in close together. We were too tired to be uncomfortable, and fell asleep before the boat had even started moving. I woke up around 7am to a cup of coffee and a chicken sandwich, and found that we were flying along the Amazon river, which through the dirty window was a grey brown under an oppressive white sky.

Far on the other side of the wide river, the unbroken green of the rainforest raced by in a blur, steady and unchanging. I scanned the choppy water for dolphins, but had no luck, and for hours alternated between reading and watching the landscape sweep by, always the same view, like the background in a Tom and Jerry chase scene. Strangely, it didn’t become boring; although it never seemed to change the landscape was always different, the surface of the river changed as the light did, getting lighter and sparkling as the day grew brighter. The forest in the distance seemed ever brooding and mysterious; not just a band of green but something dark and full of life, of secrets.

By late afternoon, stiff from travel, uncomfortable, and slightly motion sick, I still hadn’t had my fill of the landscape, but I was bored of sitting down. The ugly, grey port of Iquitos looked beautiful to me, the smoke and boats and concrete buildings meant land, roads, movement from the position I’d been stuck in for twelve hours. It was a strange contrast, one of the worst journeys of my life and at the same time one of the best. Adventure is like that – romantic but also uncomfortable, exciting but difficult – and I suppose it’s the hardships that make the journey worth it, in the end.

READ MORE: How to Sail the Amazon from Colombia to Peru

Some posts on this site contain affiliate links. If you book or buy something through these links, I earn a small commission (at no extra… Read More »How to get from Colombia to Peru by Boat on the Amazon

Horserides and Waterfalls in Salento

Some posts on this site contain affiliate links. If you book or buy something through these links, I earn a small commission (at no extra… Read More »Horserides and Waterfalls in Salento 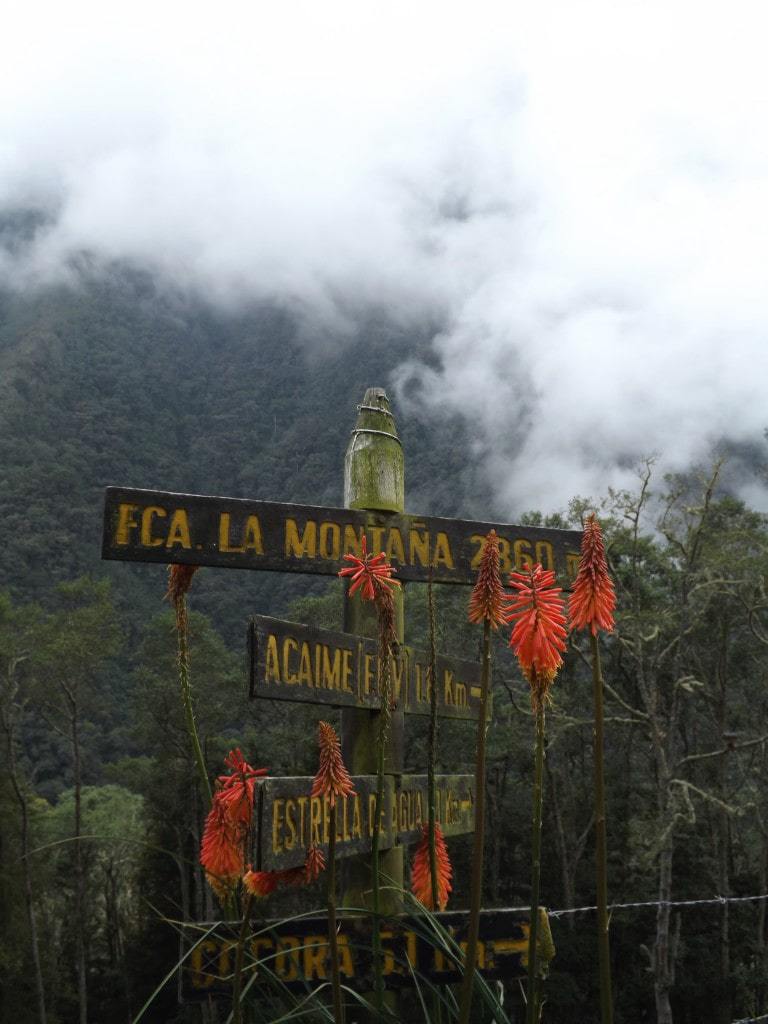 Hiking the Valle de Cocora in Salento, Colombia – from Indiana Jones bridges, to cloudy mountain tops, to cows and palm trees in the mist!