In 2014, I spent five months travelling overland through South America with my then-boyfriend.

Even in summary, there is so much to say about this trip. It took hundreds of blog posts and thousands of photographs, as well as tons of social media bragging, to capture even just a small screenshot of the adventure!

In five months, we covered six countries and racked up hundreds of hours on buses, over twenty different modes of transport, and just about every extreme climate imaginable. Here is the briefest possible summary of it all, along with a timeline/index of all my blog posts…

Easily our favourite country, Colombia’s biggest asset was in the element of surprise. We simply hadn’t been expecting anything much from it. Still a relatively new tourist destination – we visited areas that had only been safe for tourists for the past five years – Colombia had a wonderful element of discovery to it.

From Bogotá, we made our way up to the Caribbean coast to seek out the most pristine tropical beaches and watch the incredible Barranquilla Carnival amongst a crowd of locals, then headed overnight from Cartagena to Medellin and on to Salento and finally Cali. We loved the whole county, which was consistently stunning, but above all we loved the people. Colombians were the warmest, friendly and welcoming people we met.

Colombia highlights include snorkelling with a sea turtle at Tayrona Park’s La Piscina beach, the stunningly gorgeous mountain town of Minca, Cartagena’s beautiful old town, limonada de coco (coconut lemonade), and misty-mountained Salento which was, quite simply, one of my favourite places in South America.

INSPIRATION: Meet the Woman who Drove SOLO from Pennsylvania to Uruguay

13th Feb – Went to the top of Cerro Montserrate in Bogotá. 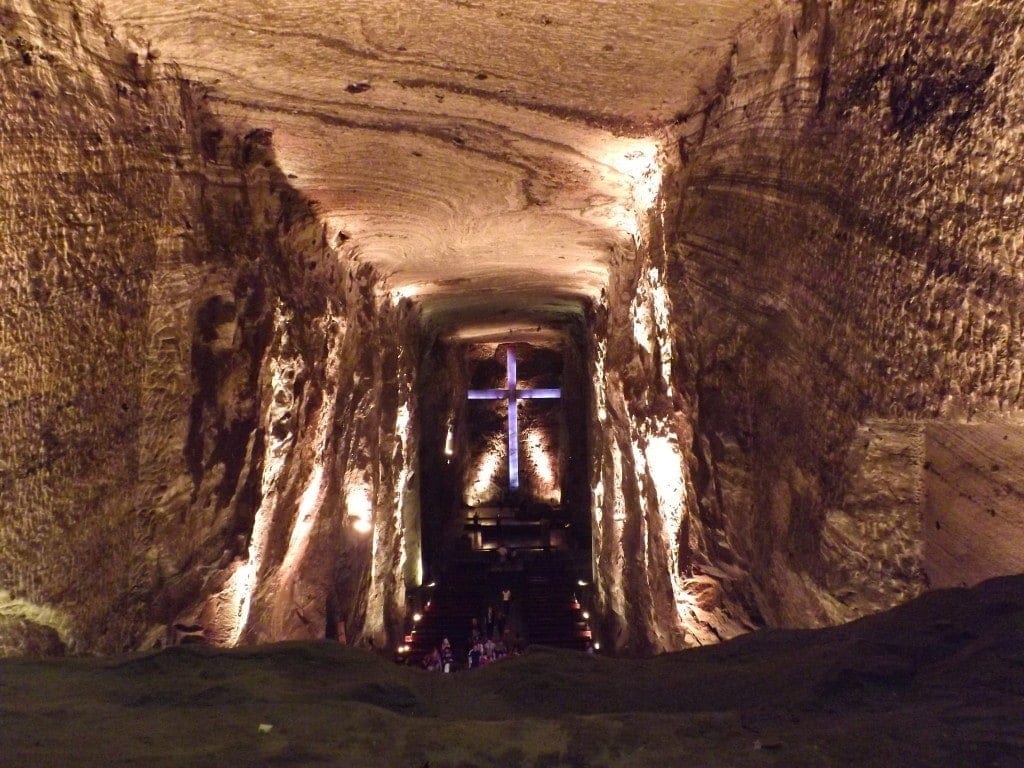 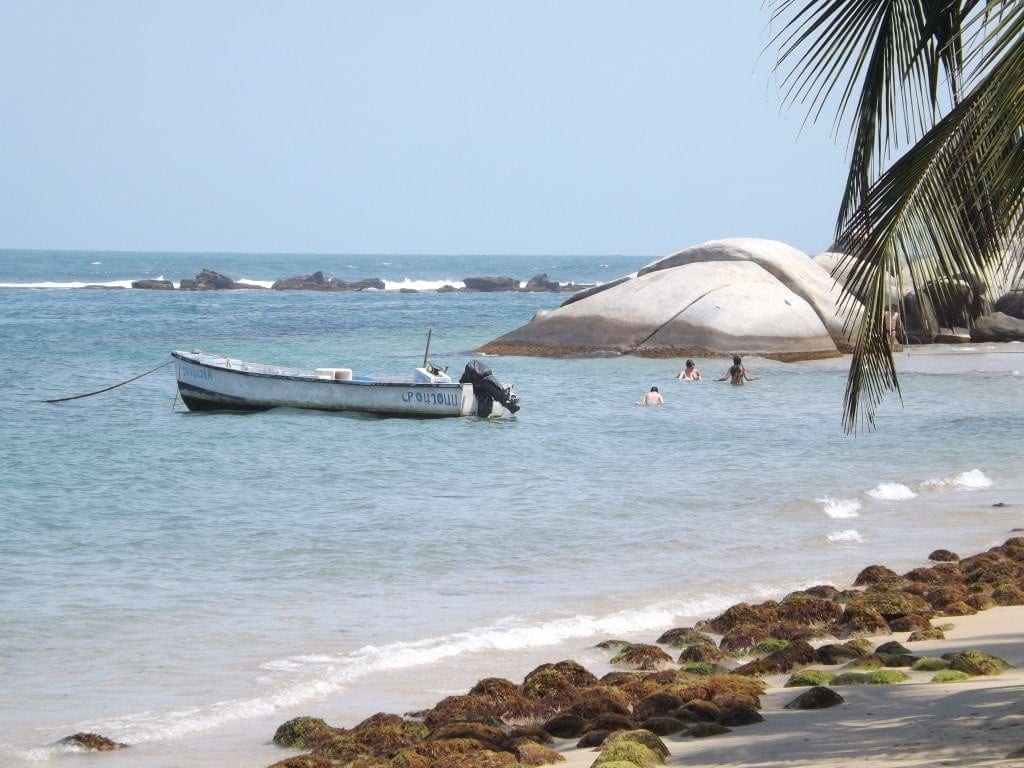 25th Feb – Headed to Minca (in the Sierra Nevada mountains). Swam in the waterfalls at Cascades Marinkas.

26th Feb – Seven (seven!!) hour hike to the top of the mountain behind Minca.

27th Feb – Swimming in the natural pools near waterfalls at Pozos Azules. 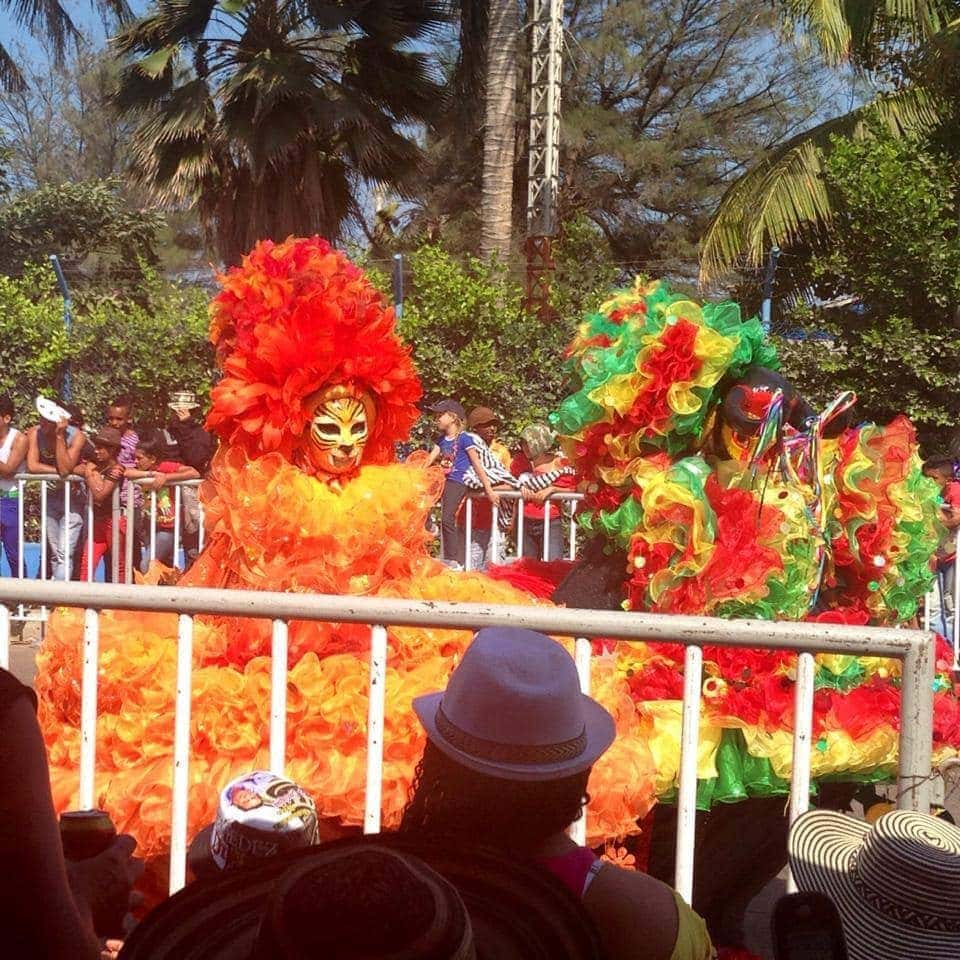 5th Mar – Boat to Playa Blanca on Baru and slept in a cabana on the beach!

13th Mar – Horse riding in Salento, high up in the Colombian Andes.

15th Mar – Cali to Leticia by air (because there are no roads). Riverboat tour in the Amazon.

Taking the road-less-travelled overland from Colombia, we sailed into Peru along the Amazon river. It wasn’t quite as glamorous as it sounds; the narrow riverboat was packed out and we sat on uncomfy seats for twelve hours watching a narrow band of green slink past under a slate grey sky, but it was the Amazon and it was the most adventurous way of reaching Iquitos, a city smack in the middle of the Peruvian rainforest.

From the Amazon, we headed via Tarapoto and Moyobamba to the coast, exploring Indiana-Jones-style ruins and tombs in Chiclayo and Trujillo en route to Lima. After a couple of weeks getting off the beaten track, we got firmly back on it after Lima, travelling from there to Cusco with the new hop on hop off bus company Peru Hop and taking in Paracas – home of the Ballestas Islands and about a billion sea lions – desert-bound Huacachina, and the Nazca lines along the way.

After Cusco  – which was beautiful – and our Machu Picchu tour – which was spectacular – we headed back to Arequipa, and finally to Lake Titicaca on the border with Bolivia. Highlights include hugging a baby sloth in the Amazon getting a new tattoo in Lima, sandboarding in Huacachina, watching a gig in the smallest bar imaginable in Cusco, condor-spotting on our three day Colca Canyon trek, and, of course, Machu Picchu.

16th Mar – Sailed down the Amazon River to Iquitos in Peru! 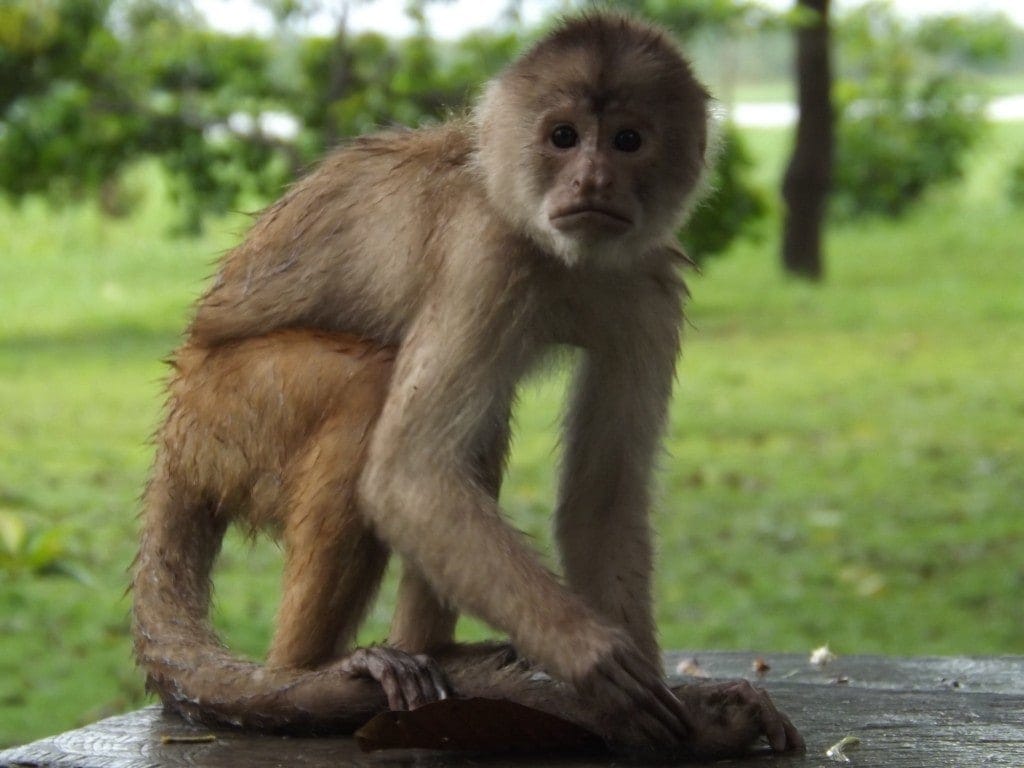 19th Mar – Quistococha zoo and lagoon just outside of Iquitos. Evening flight out of the jungle to Tarapoto.

23rd Mar – Tour of Sipan tombs and pyramids at Tucume near Chiclayo.

24th Mar – Bus to Trujillo, stayed next to Huanchaco beach.

25th Mar – Exploring the ruins at Chan Chan in Trujillo. 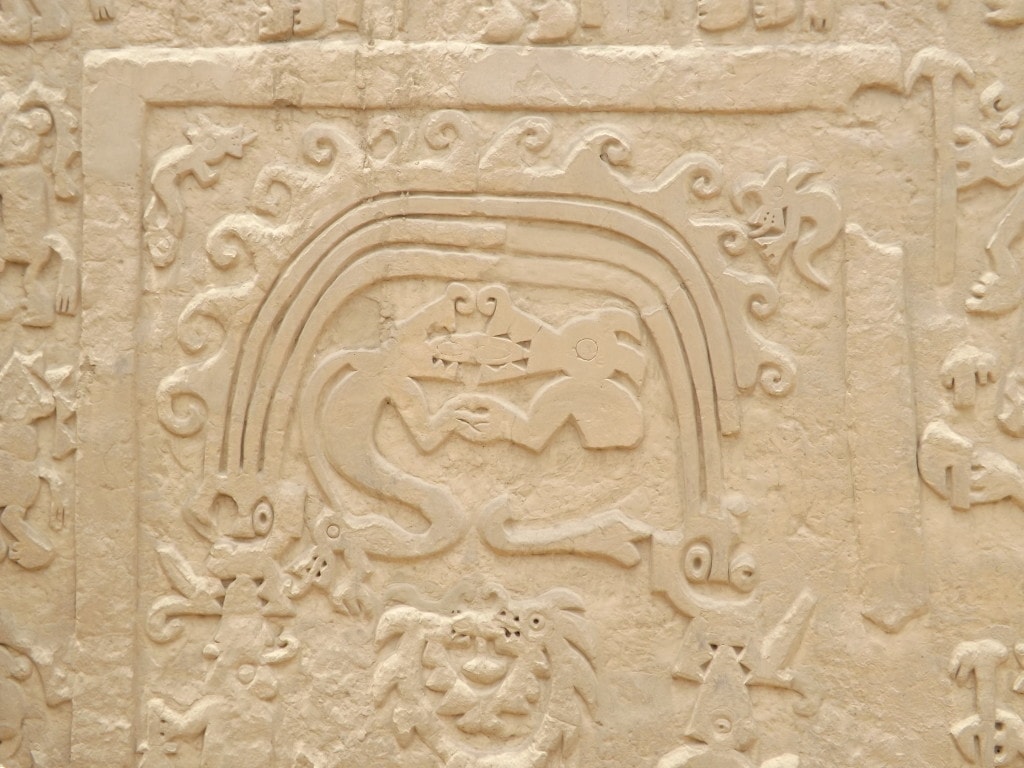 27th Mar – Walk along the cliffs at Miraflores in Lima. Evening at the Magic Fountains park.

28th Mar – ‘Day off’ in Lima – spent lounging on the roof terrace at Pariwana Hostel.

31st Mar – Started travelling with the Peru Hop bus – Lima to Cusco via Paracas, Huacachino and Nasca. Full tour en route to Paracas with stops around Lima, at Pachacamac ruins, a lovely beach and an old hacienda.

1st Apr – Morning boat tour of the Ballestas Islands in Paracas to see a huge colony of sea lions.

3rd April – Day trip into the desert near Paracas, then drove to Huacachina – oasis in the desert.

4th April – Dune buggies and sandboarding in the desert around Huacachina. 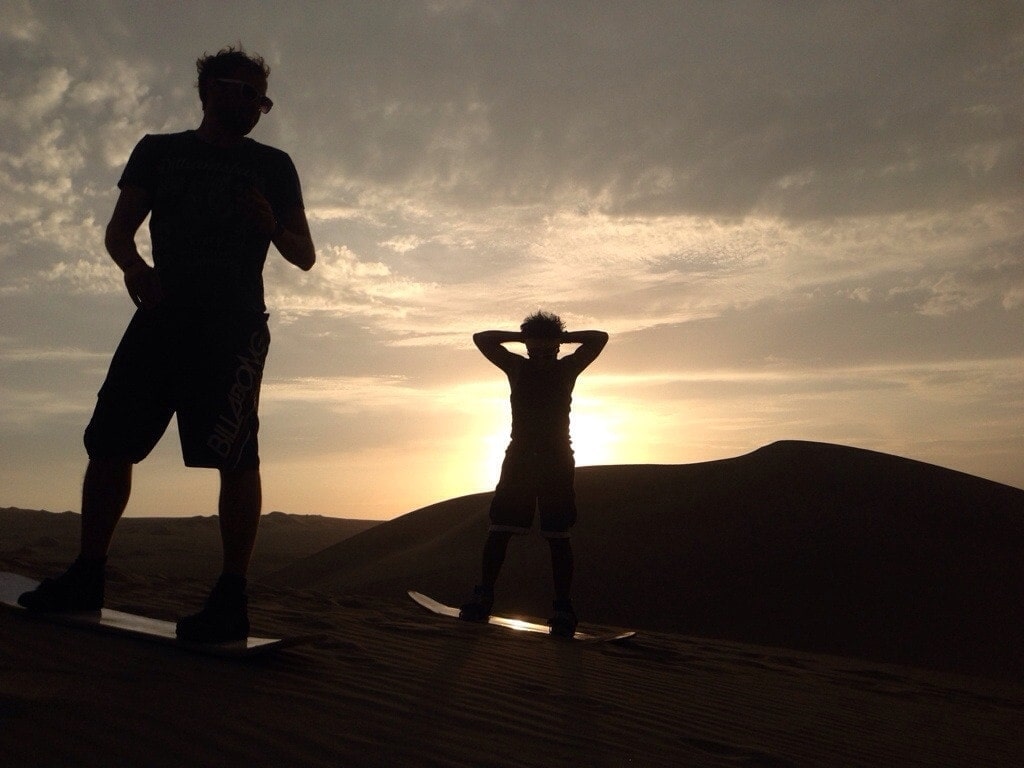 6th April – Day trip to Nazca for a flight over the lines.

7th April – Chill out day in Huacachina. Started the 26 hour journey to Cusco, with a stop in Nasca for viewing tower. 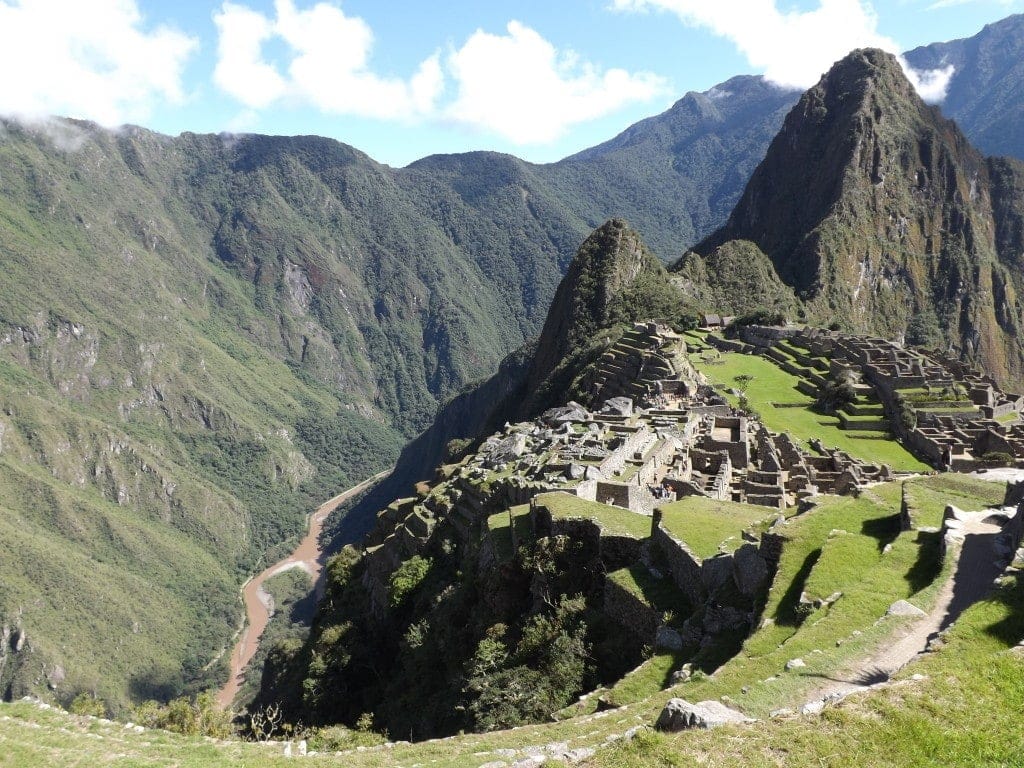 24th April – Third day of the Colca Canyon Trek – uphill hike out of the canyon, hot springs, return to Arequipa. 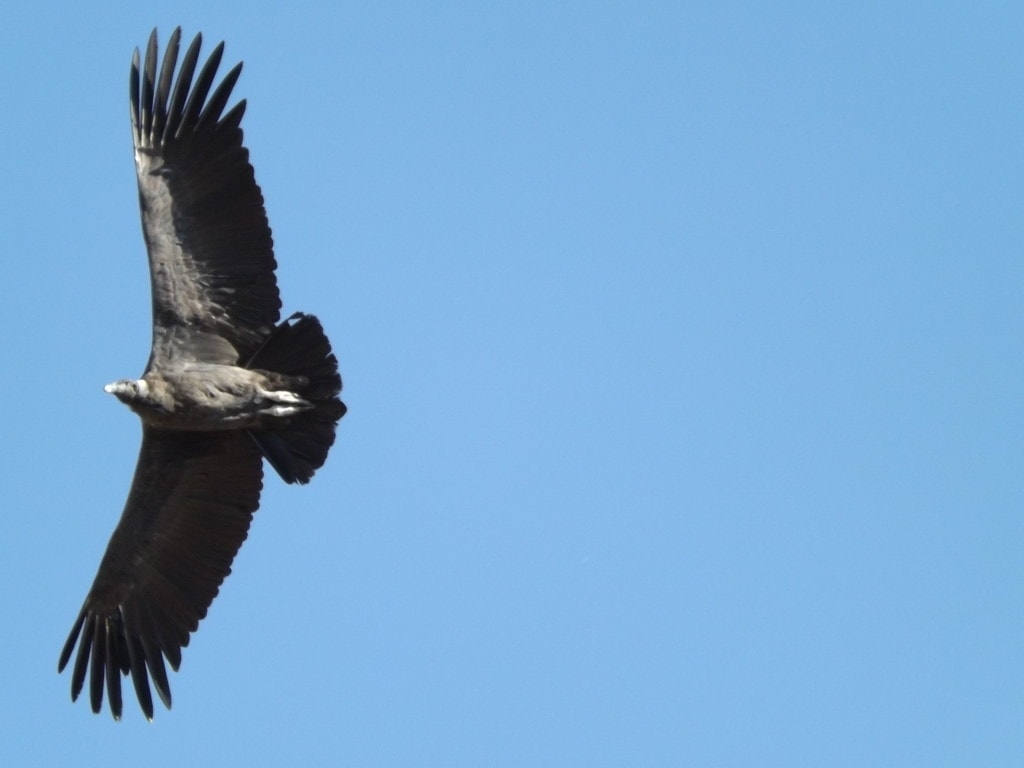 Another unexpected treasure, Bolivia was the cheapest country we visited, and one of the craziest, with ruggedly beautiful landscapes and a strong, proud culture. We had more adventures there than any country, from cycling Death Road – one of the most dangerous roads in the world – and running down a building in La Paz, to caving in Torotoro and visiting a real working mine in Potosi.

After crossing into Bolivia at Lake Titicaca, we spent a night on the spectacular Isla del Sol, before heading to La Paz for a week, then to Cochabamba and the Torotoro national park, where we spent two days exploring caves, canyons, mountains and genuine dinosaur footprints.

We spent ten days in Sucre, learning Spanish and generally relaxing after some hectic months of travel. Then we headed to Tupiza via Potosi. The last leg of our Bolivian trip was the four-day tour from Tupiza to the Salar de Uyuni, which was the biggest highlight of the country for me.

Other highlights include my lovely Spanish teacher David at the Bolivia Spanish School in Sucre,  the night sky over Isla del Sol, cheering on Bolivar with the locals at a match in La Paz, hiking in Torotoro, visiting the “Wild West” in Tupiza, and watching the sunrise over the salt flats at Uyuni.

3rd May – Valle de la Luna, followed by the zoo just outside of La Paz. 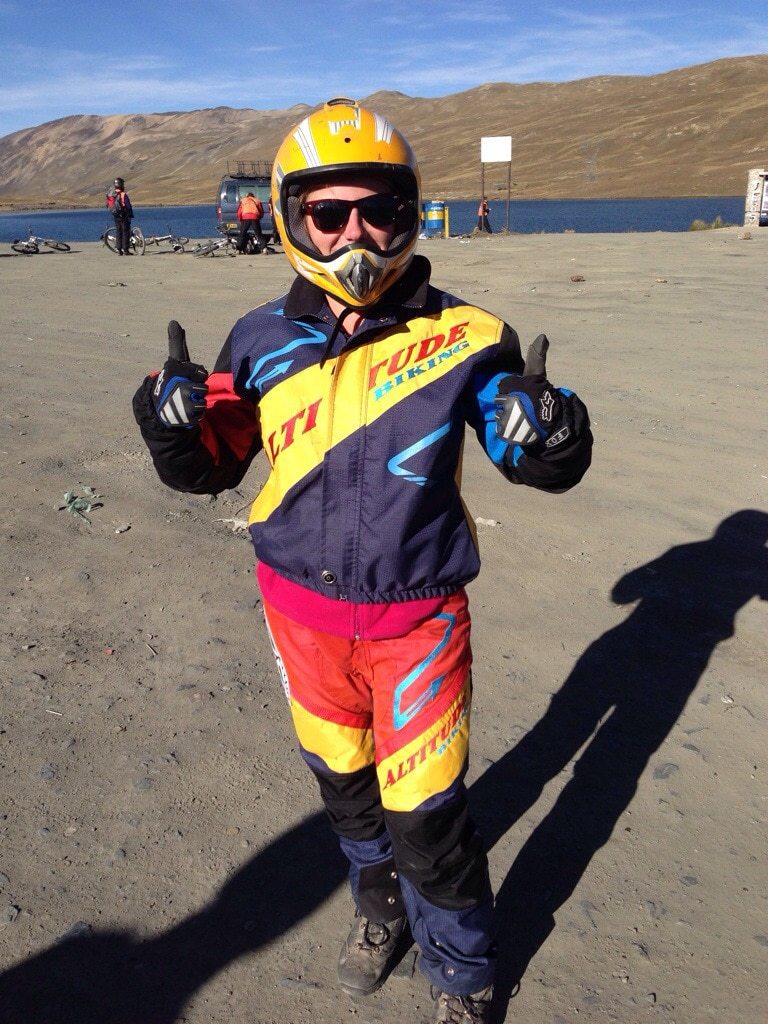 5th May – Extended city tour with Red Caps – had our luck read by a Witch Doctor in El Alto market! Night bus to Cochabamba.

7th May – Trekking to Cuidad de Inti, caving in Umajalanta.

8th May – Trek to the canyon in Torotoro – dinosaur footprints, fossils, and jumping into the river!

9th May – Bus back to Cochabamba, night bus to Sucre.

12th May – Walked to Parque Bolivar and the Cemetery in Sucre. Started Spanish lessons. 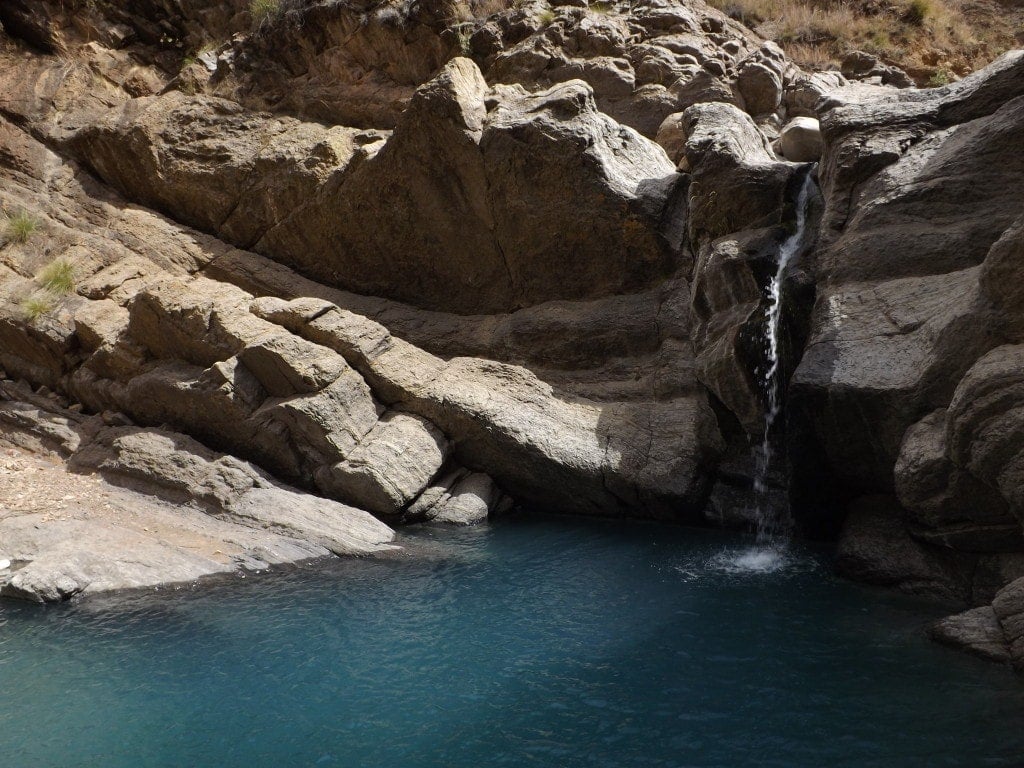 17th May – FA Cup Final. Night out with a few friends.

20th May -Tour of a working mine in Potosi. 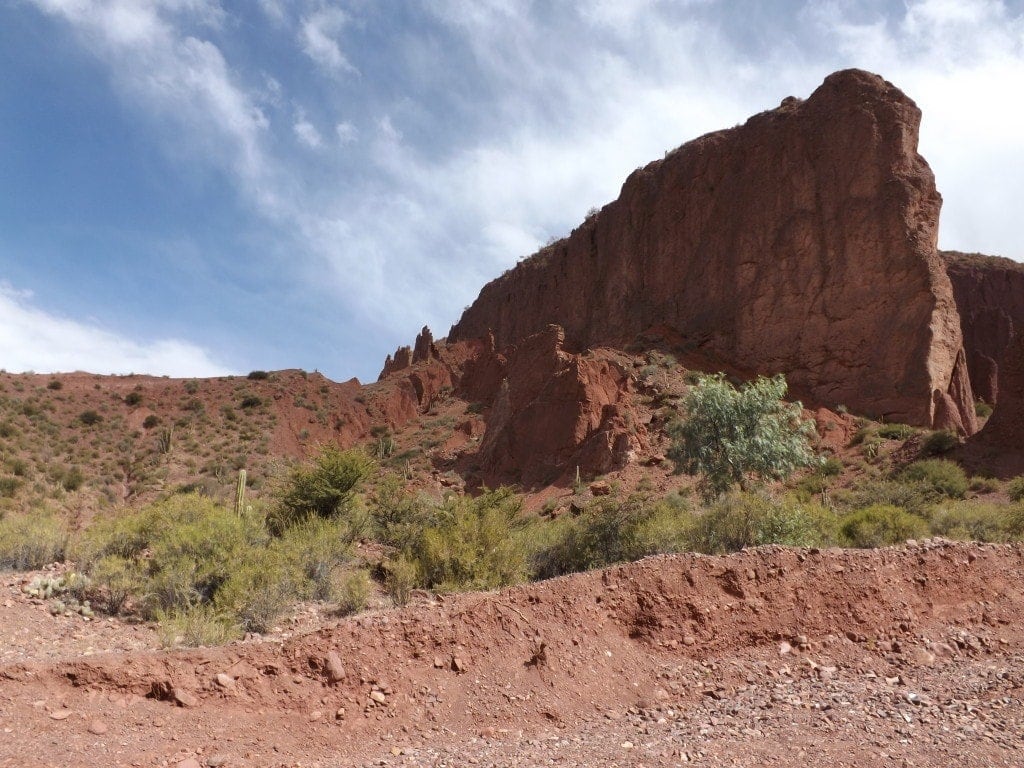 24th May – Salar de Uyuni Tour, Day One. Wind, snow and a mini Machu-Picchu in the mountains! 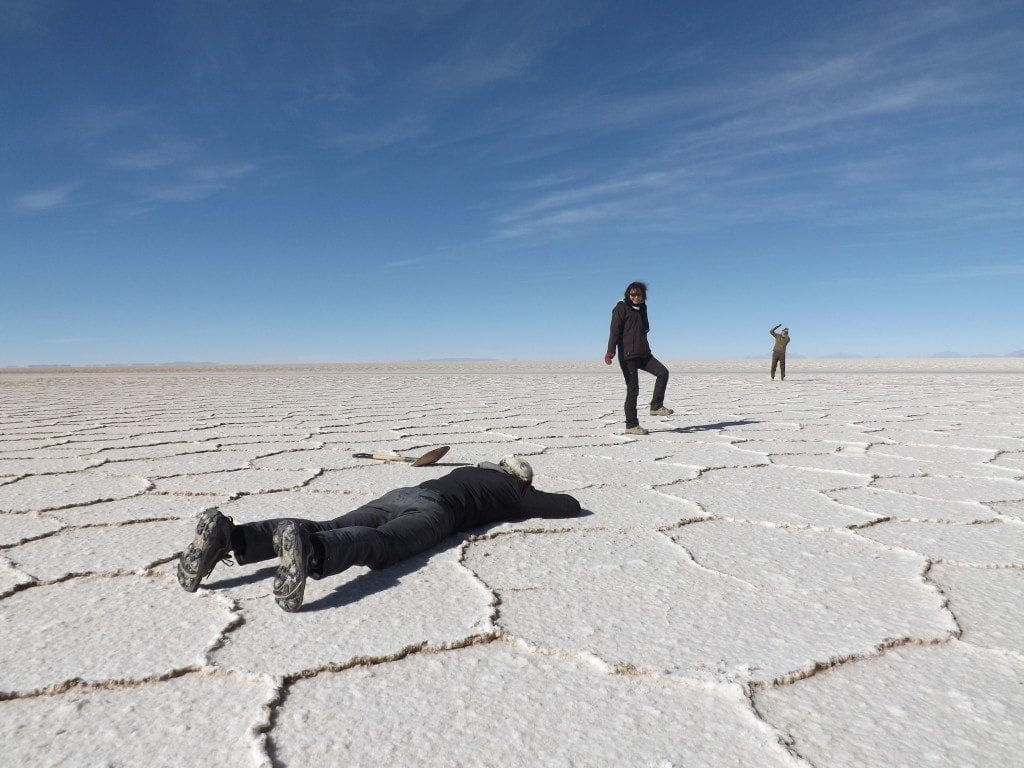 After a brief, four-day stopover in Chile, we switched to Argentina in search of the world’s best steak and wine; and we weren’t disappointed. Argentina was one of the wealthiest and most developed countries we visited, and most cities felt distinctly European or North American. But the lack in exoticism was made up for by a wonderful culture and an amazing cuisine.

Starting in Salta, we headed down to the wine region of Mendoza, then spent a week in the capital, Buenos Aires – one of my favourite cities in the world – before heading up to the border with Brazil and Paraguay to visit the spectacular Iguassu Falls.

These were one of the highlights of the entire five months, but other highlights from Argentina include the steak at Viejo Jacks in Salta, a bicycle wine-tasting tour in Mendoza, cheering on Argentina with the locals in one of the first games of the World Cup, learning to tango, the Biking Buenos Aires tour, bondiolas (enormous hot pork sandwiches), and experiencing the insane show Fuerza Bruta at it’s home in Buenos Aires.

29th May – Calama – San Pedro by bus. Walked along the river in San Pedro.

30th May – Hiked around San Pedro.

1st June – Chill out day in Salta. Watched free street entertainment in the park (clown, mariachi band, and a singer).

4th June – Arrived in Mendoza at 4pm, all you can eat meat buffet for dinner! 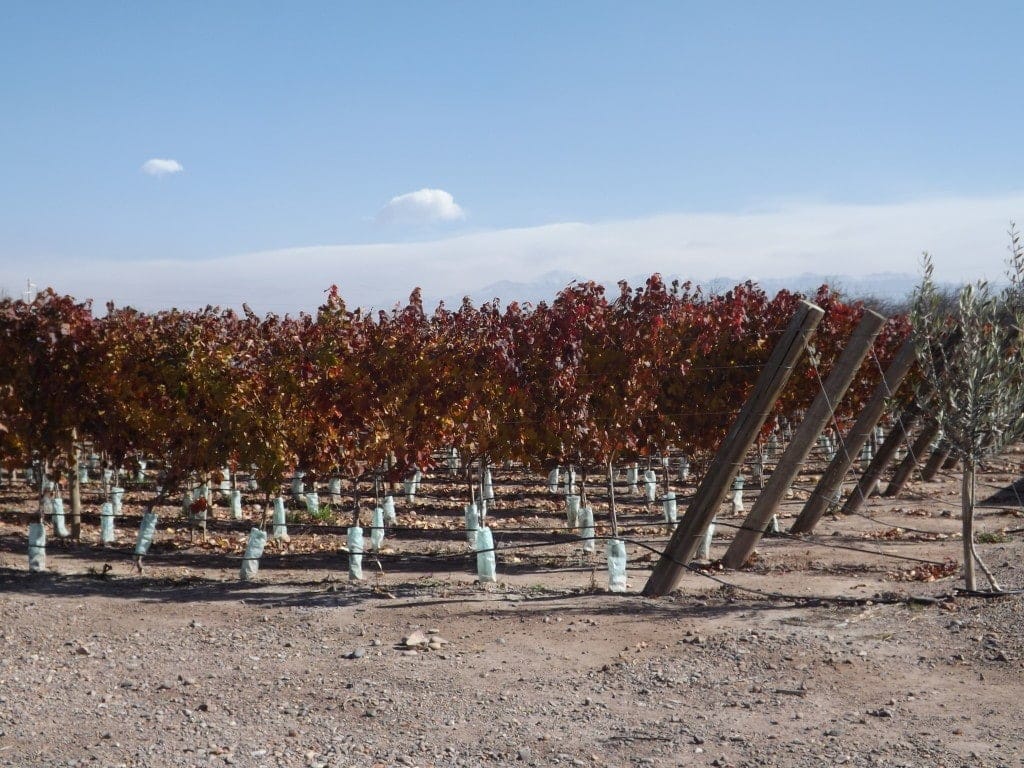 8th June – Sam’s birthday! Trek at Cerro Alto followed by cake. All you can eat buffet again for dinner.

14th June – Shopping in the afternoon, dinner and dancing at We Are Tango show in the evening. 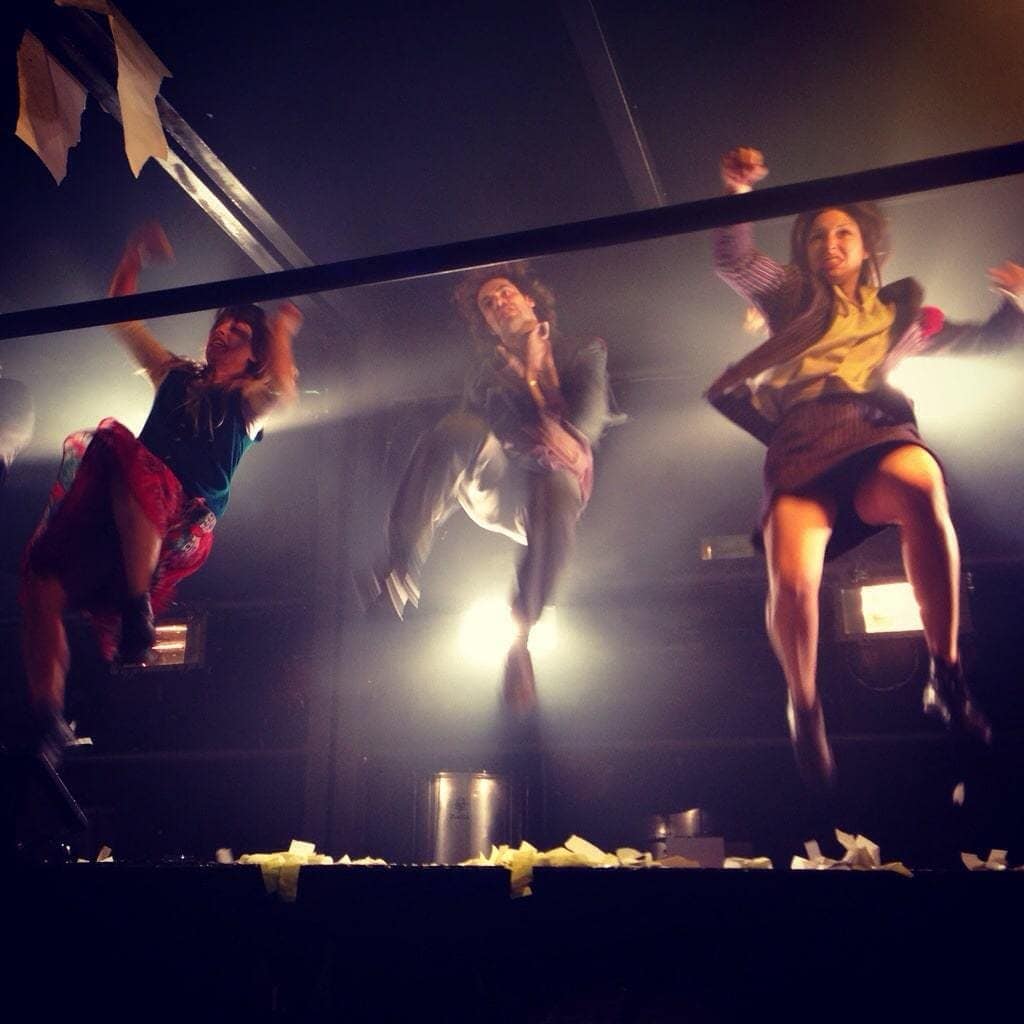 18th June – Arrived late in Puerto Iguassu, walked to the viewpoint of the Three Borders (Argentina, Paraguay and Brazil).

From Iguassu Falls, we slipped across the border into Brazil and checked out their side of the stunning falls, before hopping a twenty nine (yes, 29) hour bus ride to Belo Horizonte so that Sam could watch England play in their last group game at Mineirao stadium.

In a series of painfully long bus rides, we then headed to Porto Seguro, Paraty and finally Rio de Janeiro. We were lucky enough to be in Brazil for the majority of the World Cup celebrations, and we were in Rio for the weekend of the final, which was an incredible, once-in-a-lifetime experience.

Brazil highlights include getting soaked in Iguassu’s Garganta del Diablo, swimming on our very own private beach at Porto Seguro’s Mutari, churrasquerias, watching Brazil lose to Germany with a crowd of locals, zip lining at Paraty Sport & Aventura, caipirinhas, learning Brazilian recipes at Cook in Rio, and visiting Christ the Redeemer.

20th June – Crossed to Brazil and went to Iguassu Falls Brazil Side! 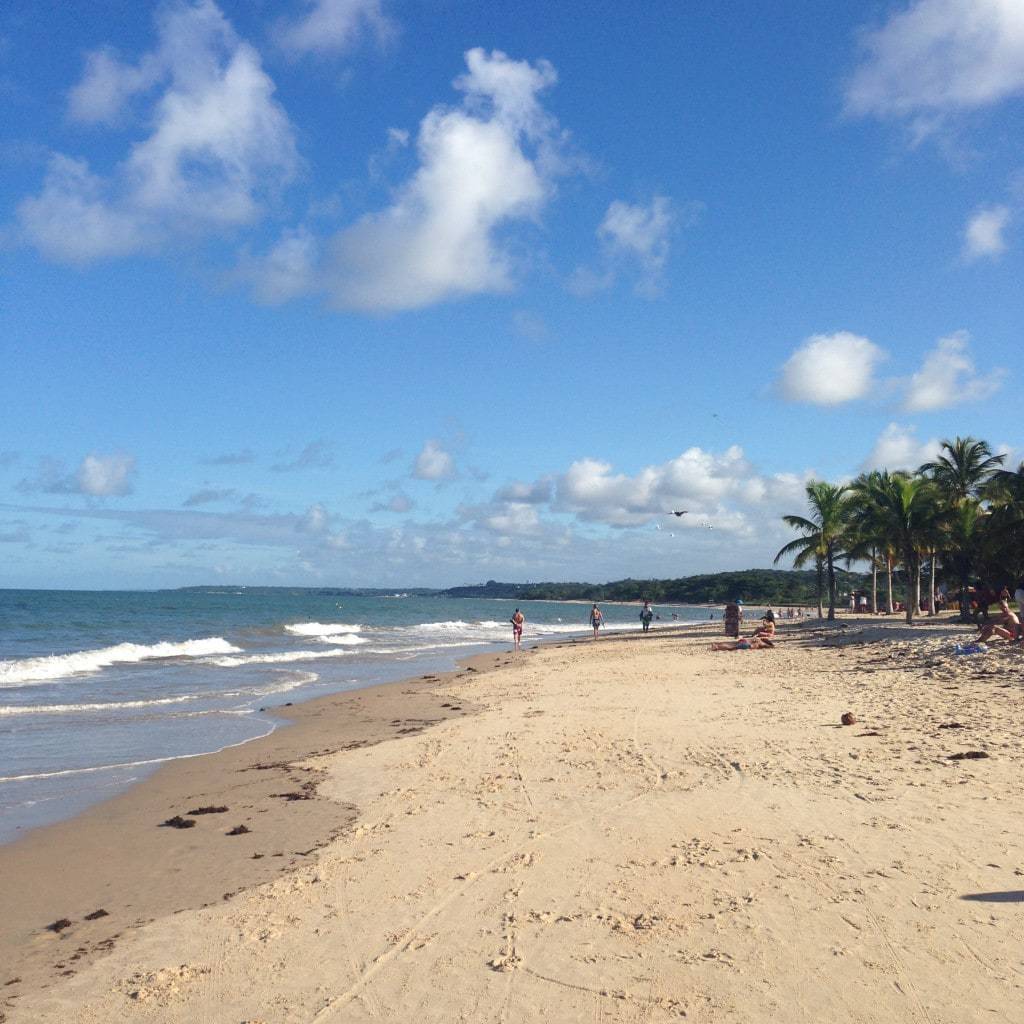 27th June – Ferry to the beach at Arraial D’Ajuda.

28th June – Walked to the beach at Taperapuan. Cocktails on Paseo Do Alcool (alcohol alley) that evening.

30th June – Ferry to the beach at Arraial D’Ajuda (again).

2nd July – Bus about 30 minutes away from Porto Seguro to the beach at Mutarí – had miles of beach to ourselves! 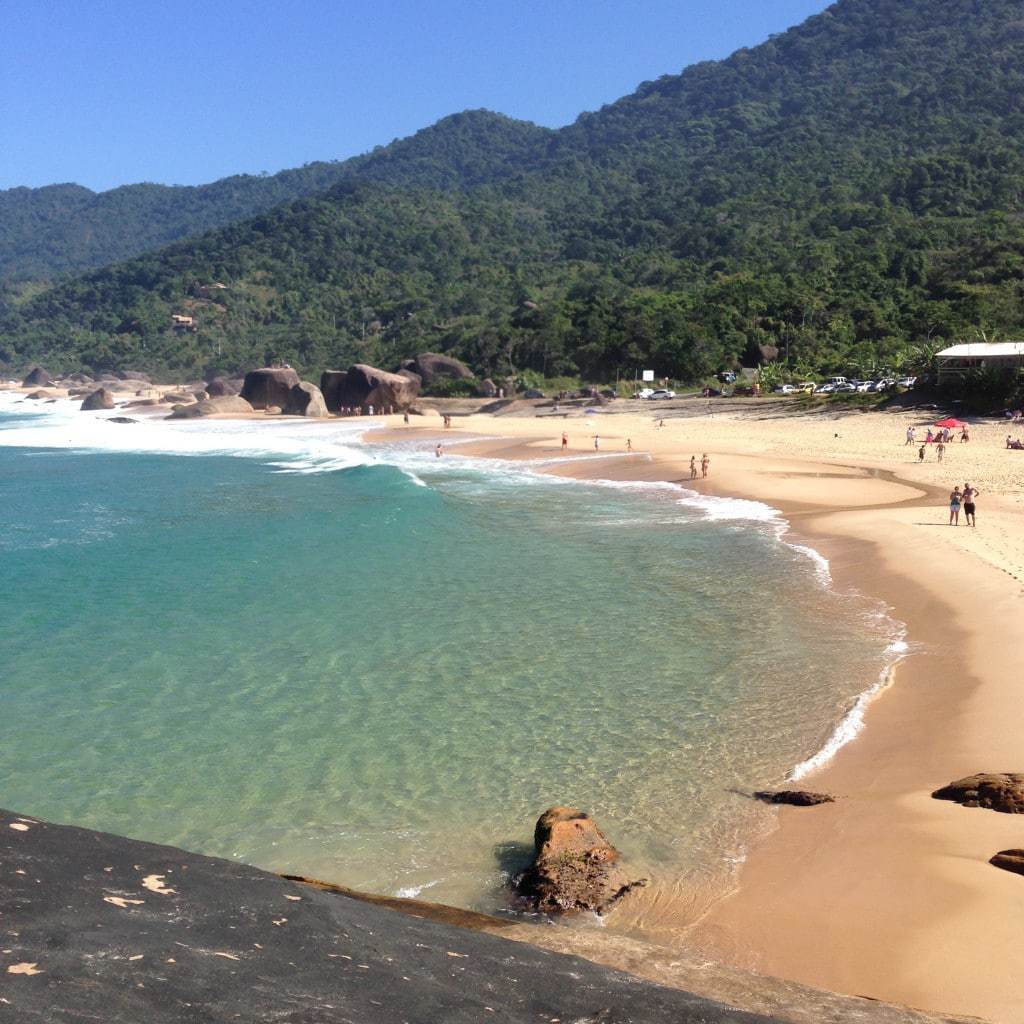 6th July – Bus to the beach at Trindade.

7th July – Bus to Penha to visit waterfalls in the Atlantic Forest.

10th July – Bus to Rio! Very long-winded journey across the city to Hostel Rocinha in the Rocinha favela.

11th July – Bus to Copacabana beach for a walk and to explore the FIFA World Cup fan area.

14th July –  Moved across the city to Lapa district. Walked around Lapa and checked out the Selaron Steps. 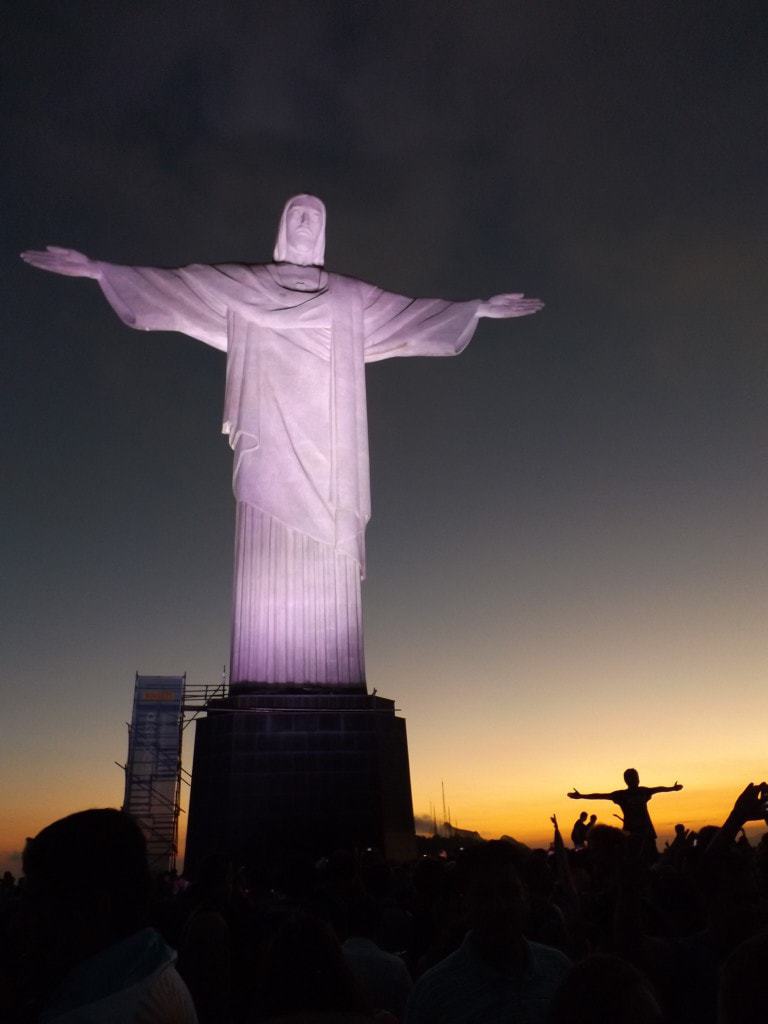 Whew! That just about summarises my 155-day South American adventure. But of course, there is so much leftover. So many untold stories that don’t quite fit into my blog posts, so many wonderful characters and friends we met, so many hundreds more photographs that never got shared, and so many beautiful, secret memories that I’ll keep all to myself.

This was my first ever backpacking trip, and it opened up a door to a whole new version of myself. I can honestly say that the trip made me braver and stronger as a person, and were some of the best months of my life. But the adventures didn’t stop there – after realising I could make my blog work as a full-time career, I kept travelling. And I’ve never looked back!