Home Asia What to Eat in Dubai 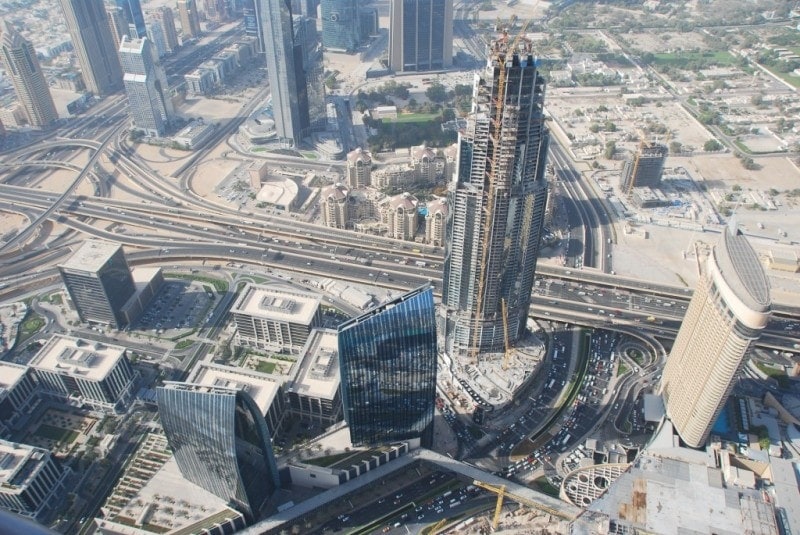 Wondering what to eat in Dubai? I’ve gathered up recommendations from travellers and ex-pats to put together the perfect Dubai food guide!

Over 200 nationalities call Dubai home, so this city is a true melting pot of cultures. And nowhere is that more apparent than in the food scene!

Traditional Emirati cuisine is influenced heavily by Middle Eastern and Asian flavours, so many of the following dishes are recognisable. But the city’s dazzling modernity and international status mean a slew of influences from around the globe, as well as plenty of high-end experiences catering to Dubai’s luxury-loving residents and visitors.

Recommended by: Kathryn Burrington from Travel With Kat. Find out more about the Dubai Food Festival in Kat’s post Best Things to Eat in Dubai 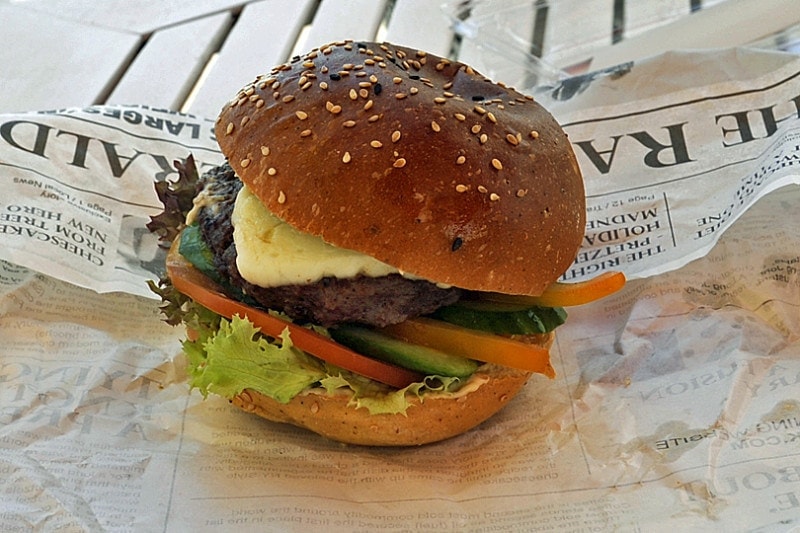 I knew camel was a traditional meat eaten in UAE but I had heard it could be tough and rather gamey. However, when I saw camel burger on the menu I couldn’t resist finding out for myself.

It was served with halloumi cheese and a delicious date and lime jam in a sesame seed bun – a wonderfully modern take on an authentic meal. I was pleasantly surprised that the burger itself was actually very tasty and tender. I’d definitely recommend it. 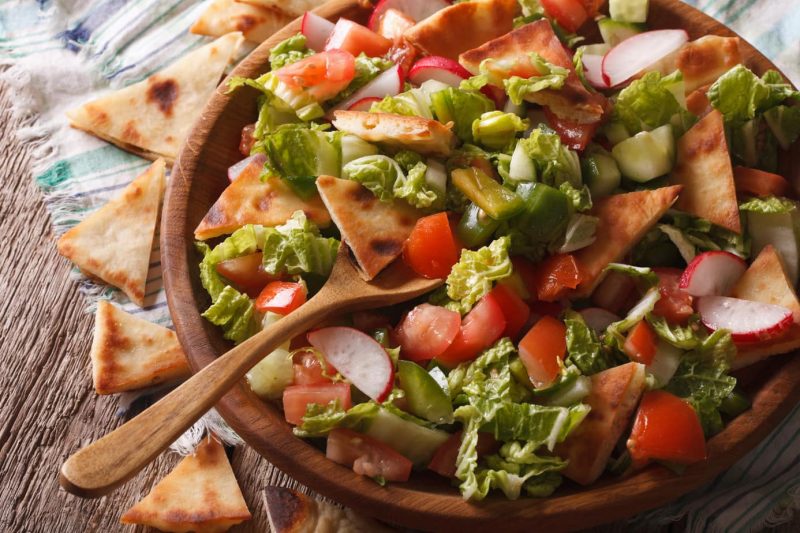 “When we went in March 2013 we ate loads of fattoush salad” says Roma. Fattoush is a classic Middle Eastern salad. Although perhaps more associated with Lebanese cuisine, it’s very popular in Dubai, as well. This crunchy salad varies from place to place, but the core ingredients include tomatoes, cucumber, romaine lettuce, and fried pieces of khubz (a kind of flatbread). 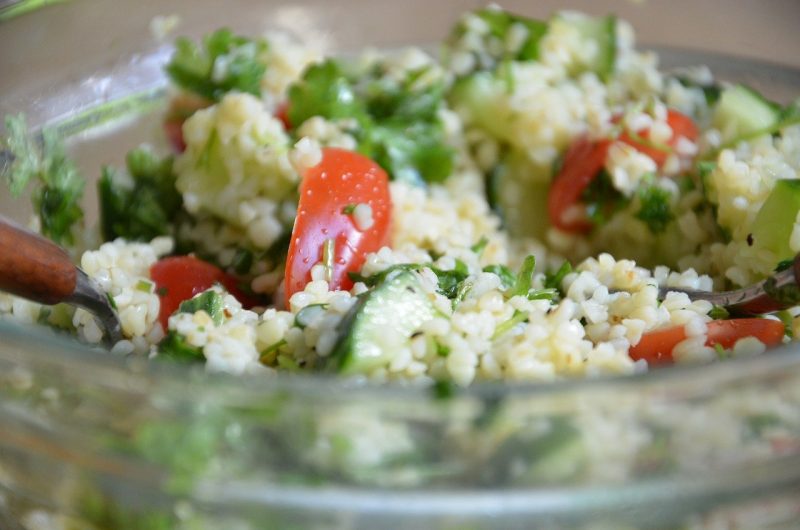 Another Middle Eastern salad that you’ll find all over Dubai is tabbouleh. A super fresh, herby salad made with bulgar, in which parsley is the main ingredient. Most recipes also call for mint, green onion, cucumber and tomato, with a simple dressing of olive oil, lemon juice and garlic.

Mutabbal is usually served as an Arabic Mezze. It is an eggplant dish where the eggplant grilled, mashed and then mixed with garlic, tahini and topped with olive oil. My favourite is when it is served with pomegranate seeds.

Emirati cuisine features several hearty, meaty dishes such as magoogat. Also known as marrgoog, this dish is a rich, slightly spicy tomato-based stew usually made with chicken or lamb. 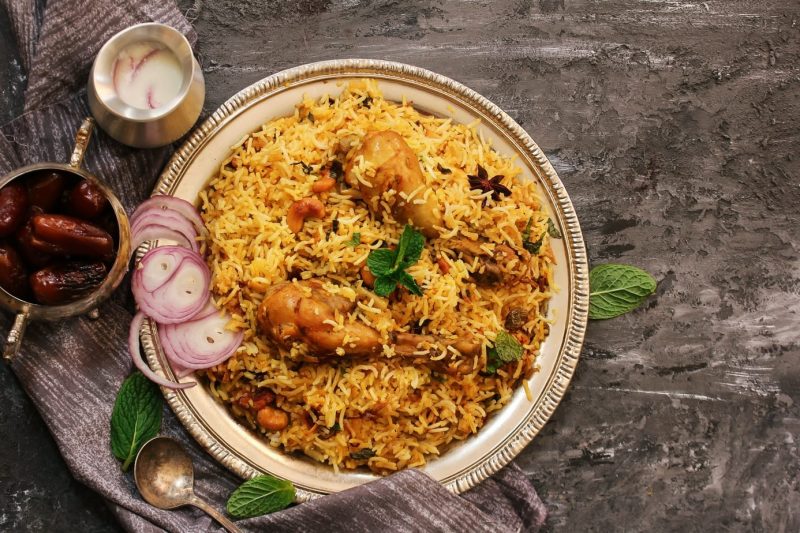 Machboos is a traditional rice dish which is one of the top things to eat in Dubai. It’s made with an aromatic mix of spices, including cardamom and cinnamon, and mixed with dried limes. Typically, machboos (aka majboos) is made with chicken, but you can also find lamb or seafood versions too. 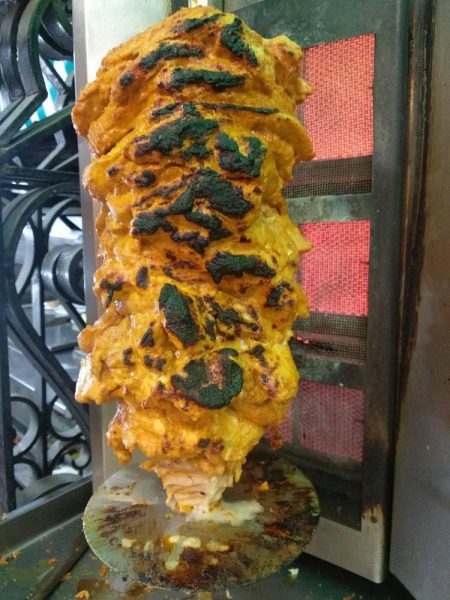 Your food tour in Dubai is incomplete without a shawarma roll! It’s a traditional Arabian food made with chicken, lamb, beef or turkey. The recipe of shawarma is very unique but simple. The block of meat is grilled and shredded slowly while the spit rotates. Then it is served on a pita bread with tahini sauce and vegetables which make it very yummy.

Where to Try: I have come across several restaurants serving this delicious dish in Dubai, but I found the best shawarma roll in the popular Lebanese restaurant Al Safadi. 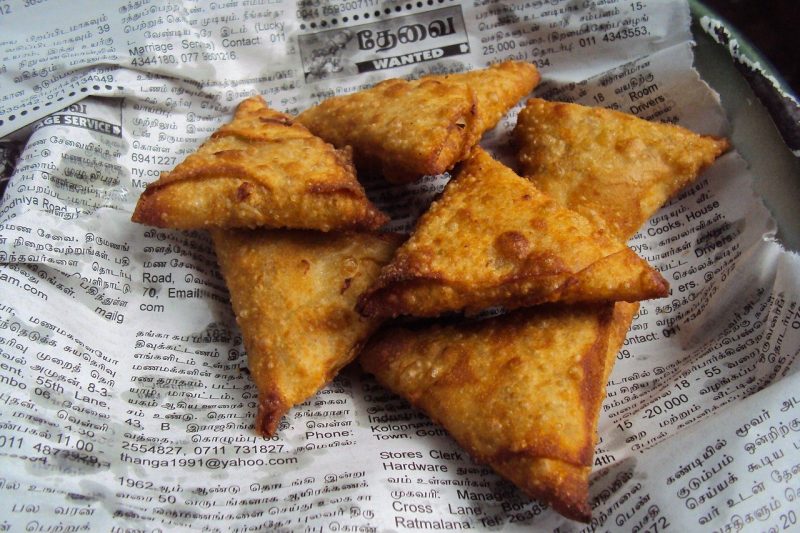 Much of the food scene in Dubai is influenced by the other cultures which call this city home. Originating in India, samboosas (aka samosas) are also a popular snack in Dubai. As in India, these crispy-fried pastries can be filled with a variety of meats, veggies, and spices. In Dubai, a cheese-stuffed version is also very popular.

Al harees is a traditional Arabic dish commonly eaten during Ramadan. However, you can usually find it in many ethnic restaurants around Dubai all year round. Made from ground wheat and meat, al harees is a savoury, porridge-like dish served topped with ghee. 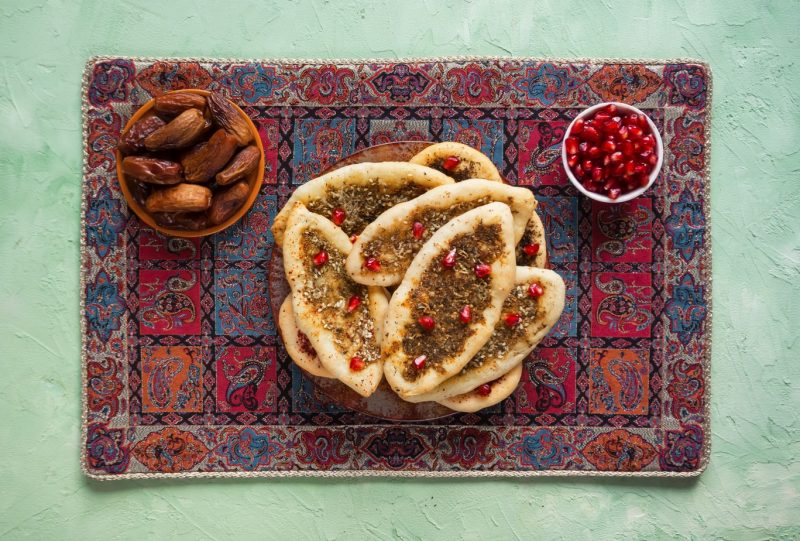 Manousheh is another Lebanese classic which is popular in Dubai, where it’s often eaten for breakfast. This is a simple dish made from a crispy flatbread topped with cheese, herbs, and olive oil. Many of the more contemporary restaurants are putting their own twist on the classic, so you’ll also find plenty of variations.

Recommended by: Anne Mugnier from What Doesn’t Suck

My favourite food in Dubai is seafood from Bu Qtair (Old 32B Street, Fishing Harbour 2). Bu Qtair is a small restaurant, right next to Jumeirah, so it’s the perfect place to eat freshly caught fish from the Jumeirah fishermen.

Diners sit on plastic chairs and eat with their hands, so this is a far cry from the fancy restaurants people associate with Dubai! But this awesome local restaurant is a must-try for seafood lovers – as well as bling-bling haters!

Usually served at breakfast time, chebabs are Emirati-style pancakes, so they’re a more authentic local breakfast. They are made from lightly spiced yellow flatbreads. Typically, these are stuffed with date syrup and cream cheese, then heated, for a sticky, sweet-and-savoury breakfast treat. 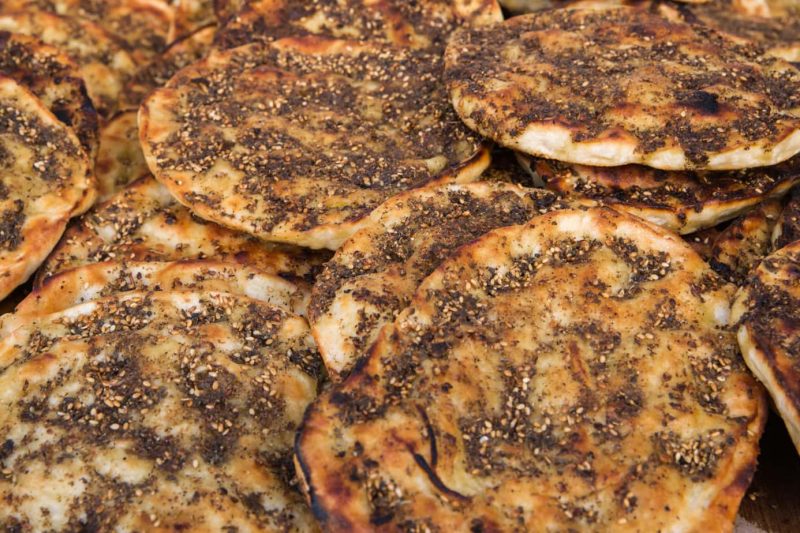 You can’t write a guide to what to eat in Dubai without including flatbreads! As with most Middle Eastern cuisine, flatbreads are popular within Emirati cuisine, and there are several varieties.

Khubz is a round, leavened bread which forms a staple part of the diet across the Middle East. It features in several Emirati dishes, and is also popular on its own or with fresh hummus or aubergine dip.

Khameer, on the other hand, is a bread sweetened with dates. Again, it can be eaten on its own, but khameer is also popular stuffed with fillings such as cheese, chicken, or meatballs. 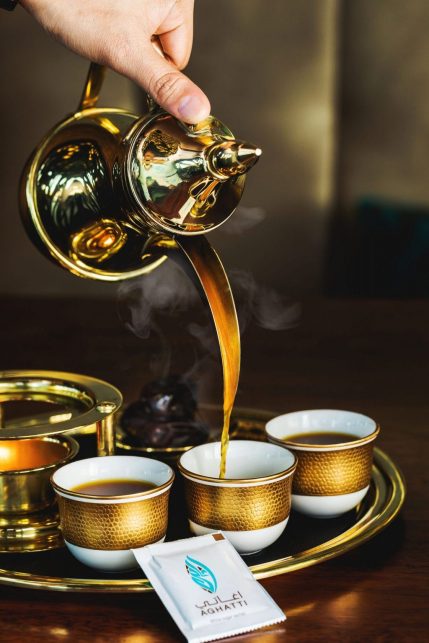 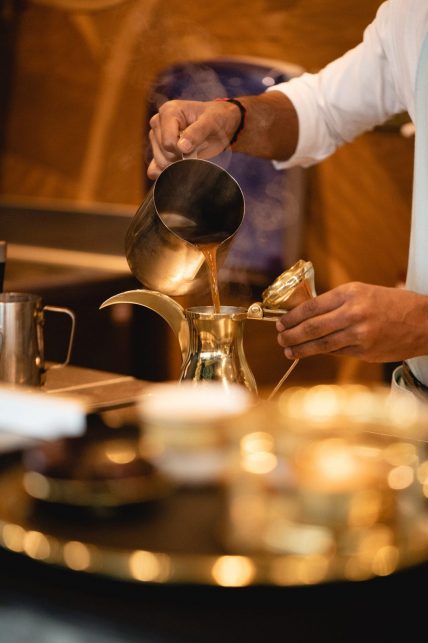 Not quite what to eat in Dubai, but coffee is such an important part of the local cuisine that it has to be mentioned. Arabic coffee is also known as gahwa or qahwa, and is often made with cardamon. Typically, coffee is served from ornate Arabic coffee pots, and there’s an air of ritual to the whole affair.

Where to Try: The Coffee Museum, the Arabian Teahouse, and Cafe Bateel are all popular coffee spots in Dubai.

Who Says? Tiffany Schureman from A Girl and her Passport

Umm Ali is a popular dessert in Dubai, although it originated in Egypt. It’s a bit like bread pudding served with pistachios on top. 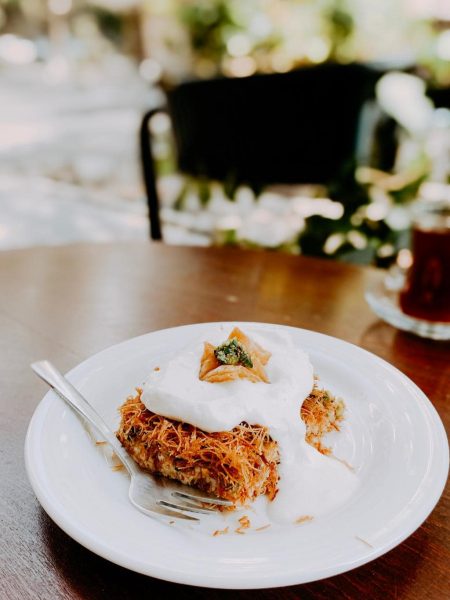 Although it originated in Palestine, kanafeh (aka knafeh) is another popular dish in the UAE. It may look like noodles, but this dessert is actually a pastry! The crispy dough is soaked in sugar syrup and layered with sour cheese, then sprinkled with pistachios.

Luqaimat are hot dumplings which are similar to doughnuts. Usually, they’re topped with a sticky date sauce and sesame seeds, although more modern establishments are introducing all kinds of quirky twists. Loqmato in the Dubai Mall offers more unique toppings, such as coconut and even Oreos! 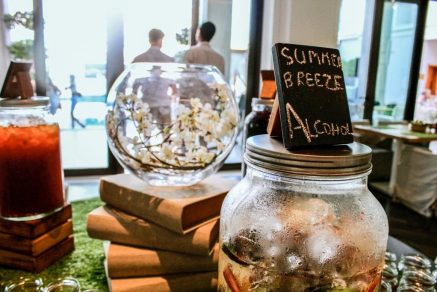 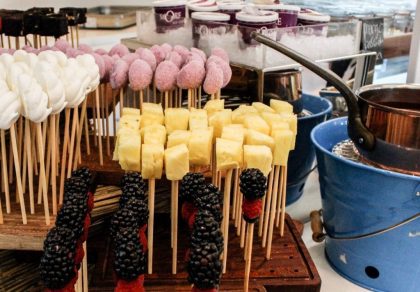 People in Dubai love their brunch, so what could be better than brunch and picnic in one? Head to the Vida Downtown Hotel (Mohammed Bin Rashid Boulevard, The Old Town) for their Urban Picnic brunch on Fridays and Saturdays. Get a basket and fill it with mason jars full of salads or mueslis, fresh pizza and quiches, sandwiches and, of course, bottomless bubbly.

To stay nourished while you fill your basket, dip fruit in the chocolate fountain or take a nibble from the giant parmesan wheel. But don’t fill up too much yet, because this is just the beginning. There is still a feast of grilled seafood and meats, as well as an array of dessert options. Luckily, you can always sleep off your food baby on their lovely daybeds around the pool!

Recommended by: Jennifer Melroy from Made all the Difference 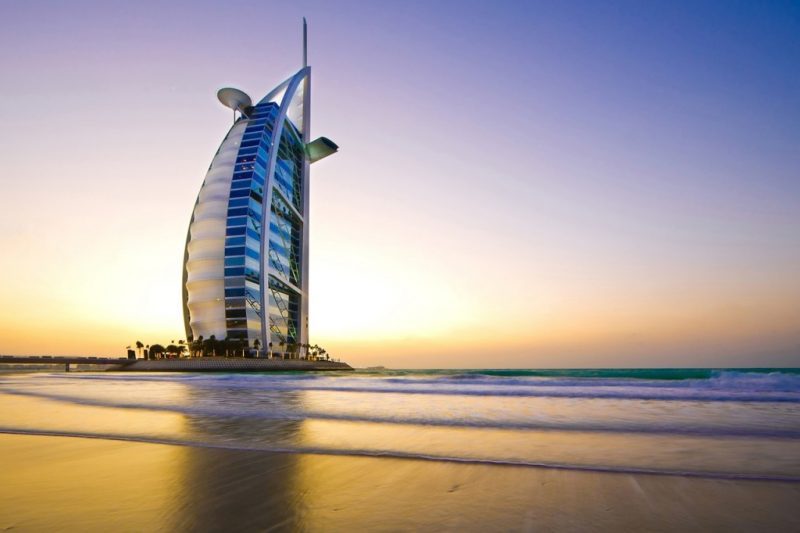 You can’t compile a list on what to eat Dubai without mentioning the famous seven-star Burj Al Arab. This iconic hotel sums up much that Dubai has come to be known for, such as bling, excess, and extreme luxury. So the seven-course high tea, with its book-like tea menu and sumptuous cakes, is the perfect experience to celebrate all that.

There’s really no better way to discover where and what to eat in Dubai than with a local guide, so a food tour is always a good idea. This is always my favourite way to discover a new destination! So, I’ve rounded up some of the best tour options from my trusted partners (contains affiliate links).

Is there anything you’d add to this list of what to eat in Dubai? Scroll down to leave a comment! 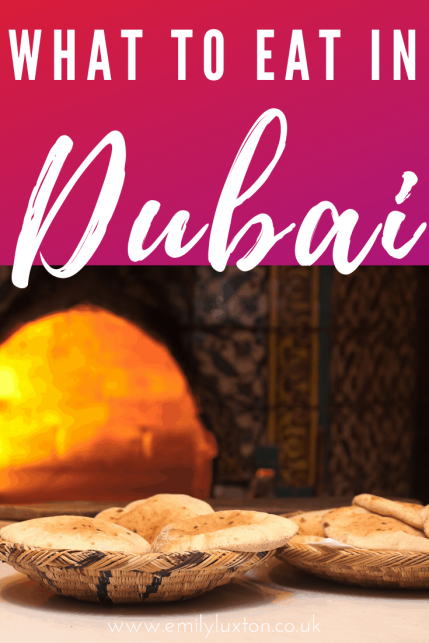 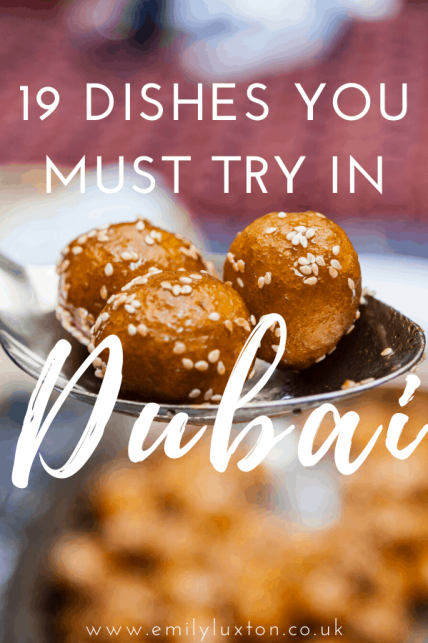