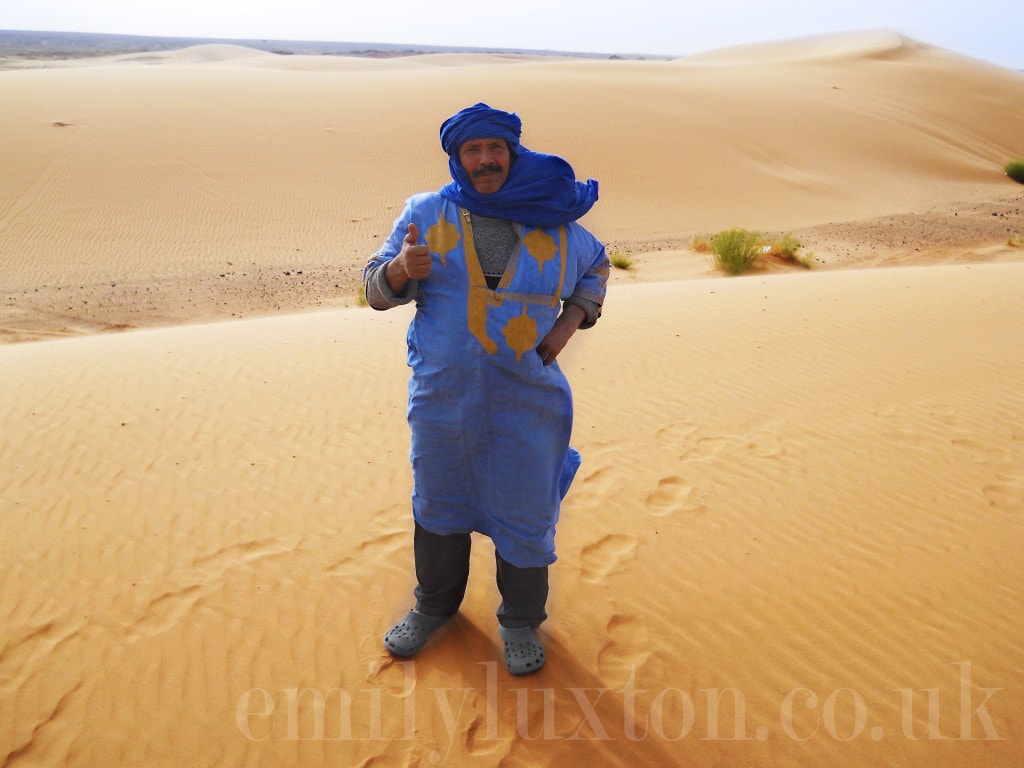 Hassan was an aging berber with a beaming smile under a bushy moustache, a couple of missing teeth and glinting black eyes. We met him at 4am, bleery eyed and blinking in the dim dawn light outside our hotel, and his cheeriness felt like an assult. He showed us how to mount the camels while they were sat down, our legs spread wide across their broad backs, loaded either side with packs.

When the camels – affectionately nicknamed Jimi Hendrix and Bob Marley by Hassan – stood up, the motion was alarmingly jerky. We formed a small caravan with one other guy, a Brazilian who spoke English with an American accent, and headed into the dunes. The camels had dirty, matted fur which was nearly bare in some places, stank of dried mud and urine, and kept doing disgusting sprout-y farts. Perhaps their lazy, stoner look inspired the nicknames; Jimi and Bob plodded along quite happily, their eyes half shut, in spite of what must have been a heavy load. 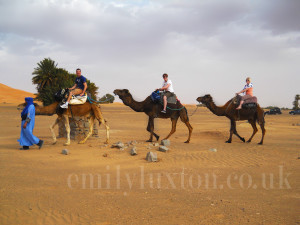 Camels are fairly uncomfortable, and moving along in single file is quite an anti-social way to travel. The scenery was beautiful though and the relative quiet meant I could look around at everything and was free to be a little introspective.

The wind picked up quite quickly as the sun began to sink down behind the clouds of the overcast sky. The breeze sent a smoky mist of sand swirling and eddying over the surface of every dune, like water vapour. Sometimes the sun would pick out the whirling clouds, light and golden against the deep, rusty orange of the dunes. At the peaks, the dust clouds poured off in a thick stream, before separating and disappearing against the grey-blue sky. As the wind got stronger, it sent stinging bites of sand against my bare skin, like pinpricks. I wished I’d brought two scarves so that I could cover my arms as well as having my face and neck protected by the scarf I’d wrapped around my head in a rough imitation of Hassan’s turban. 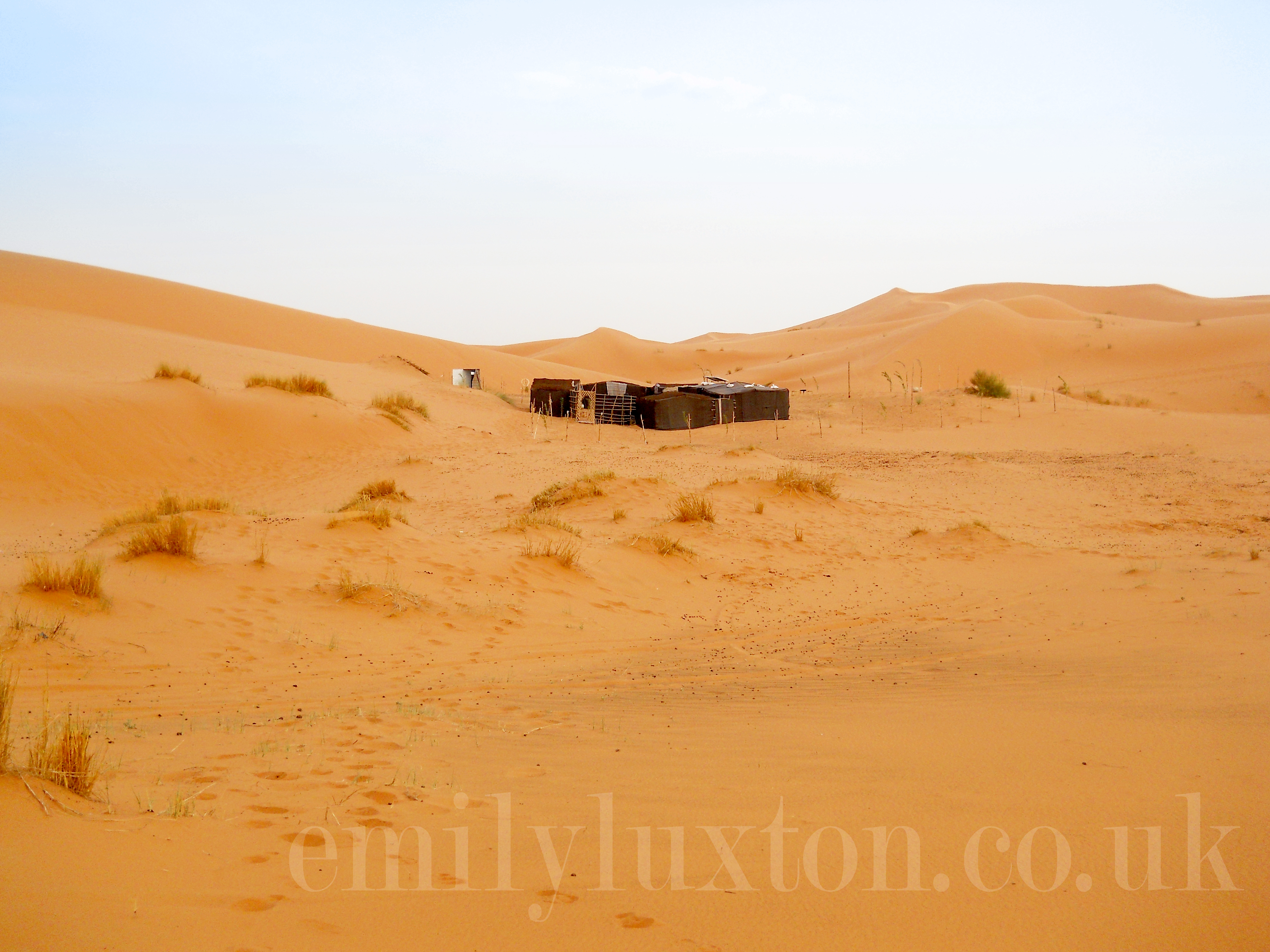 After an hour and a half of riding, my inner thighs were stiff and sore. We arrived at a berber camp; a square of rectangular tents made of a dark, felt-like material, protected from the wind by the high surrounding dunes. We climbed the nearest, on foot, to watch the sunset. The cloud cover was a little too thick, and it was very cold, so we came down again quite quickly and instead watched the stars come out from the base of the hill. 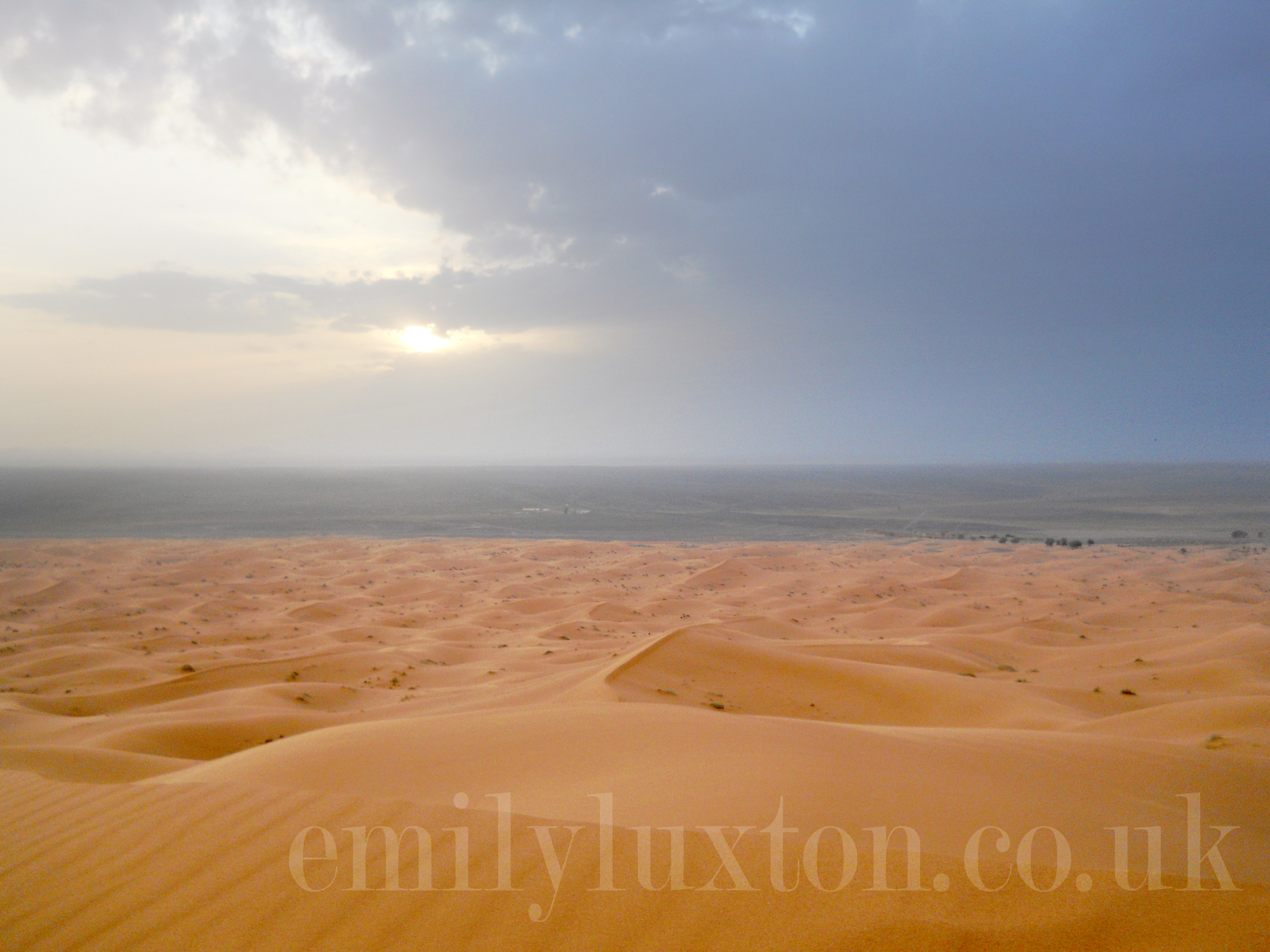 Inside the tents it was surprisingly warm; a thick mat made of woven plastic kept out the cold from the sand. An unseen assistant made us dinner in the ‘kitchen’. First came harrissa, a fiery tomato soup heavy with rice and cous cous. This was followed with “mouse tagine”, which I’m pretty certain was chicken with potatoes, carrots, tomatoes and courgettes. This was heartier than some of the other tagines we’d had, more like a winter stew, which was perfect for the cold of the desert and to refuel after the hard work of the ride.

Hassan played drums for us and put a tinny, scratched version of Bob Marley on his little stereo. We talked about the street entertainers in Marrakech; Hassan was full of stories about acts far weirder than any we’d seen. In patchy English, he described a man who stored a thick piece of wire in his nose, to pull it out and claim it as a nose hair, as well as another man whose act was to turn into a woman after eating a snake’s egg. Hassan was very funny and friendly, talking about his family, who live in the black desert behind the dunes (he pronounced it “doonas”). His favourite joke was to call camel poo “Berber chocolate”, but we couldn’t get him to eat any for us!

The bed, a mattress on the floor, wasn’t the comfiest I’ve ever slept in, but with four heavy blankets I was nice and warm. The wind outside had really picked up, howling and whipping through the camp and making a racket with anything loose it could find. It took us both a long time to fall asleep.

Waking Up for Desert Sunrise 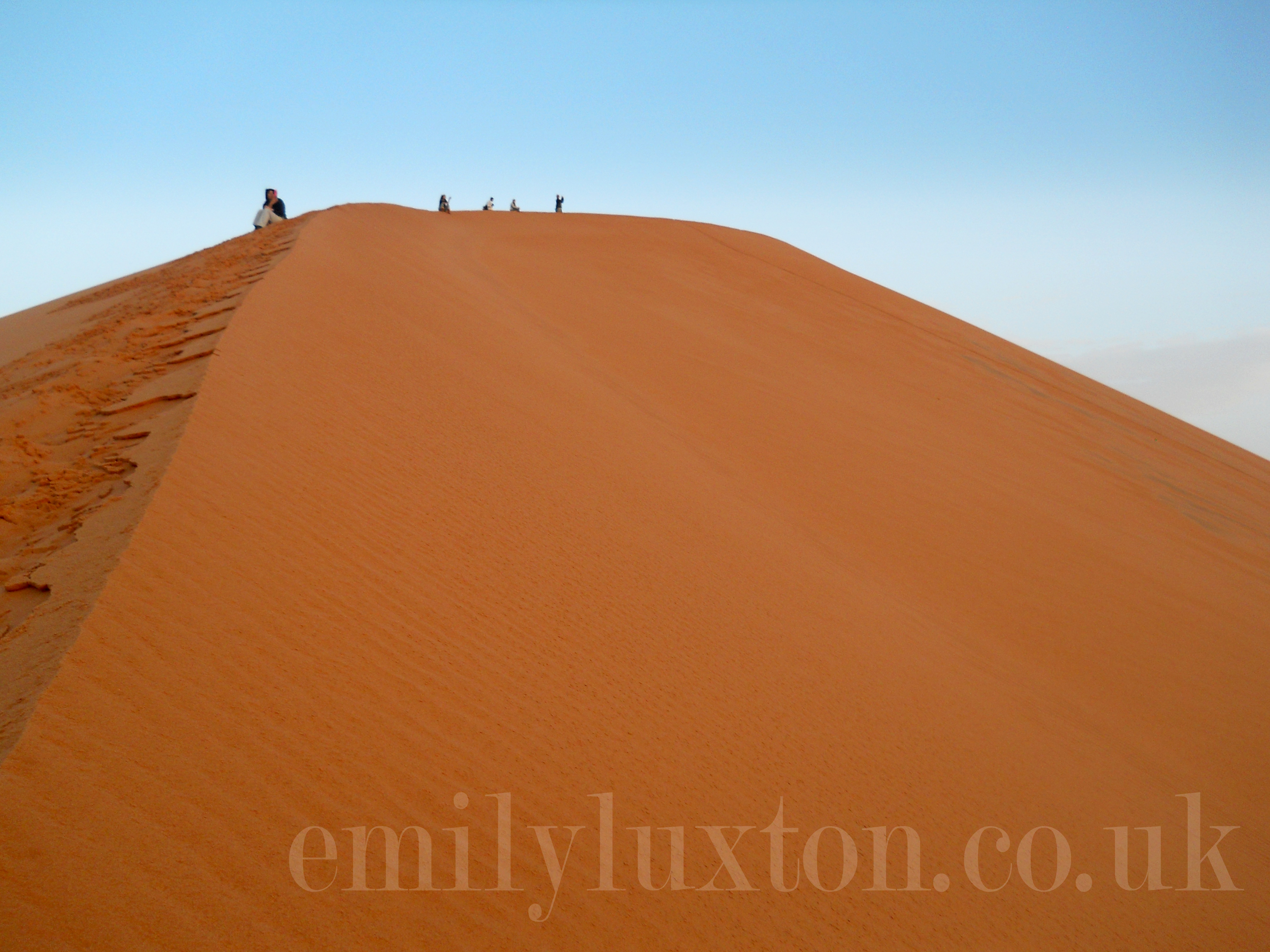 We woke up around six am. Stiff from yesterday’s ride and still half asleep we climbed the tallest dune to watch the sunrise. The wind had finally died down and the skies were clear, so we got an amazing view of the undulating dunes growing gradually lighter and more golden as the sun rose higher.

The low angled light threw the nearer sides of the dunes into shadow, creating beautiful contrasts and patterns. We were both grumpy from a bad night’s sleep and early morning exercise, but the view was really worth it and, fortunately, could be enjoyed in silence. I couldn’t stop thinking that I’d probably never be there again, never see that sight again, which helped me ignore the general discomfort of early starts and camel rides, and really make the most of the experience. 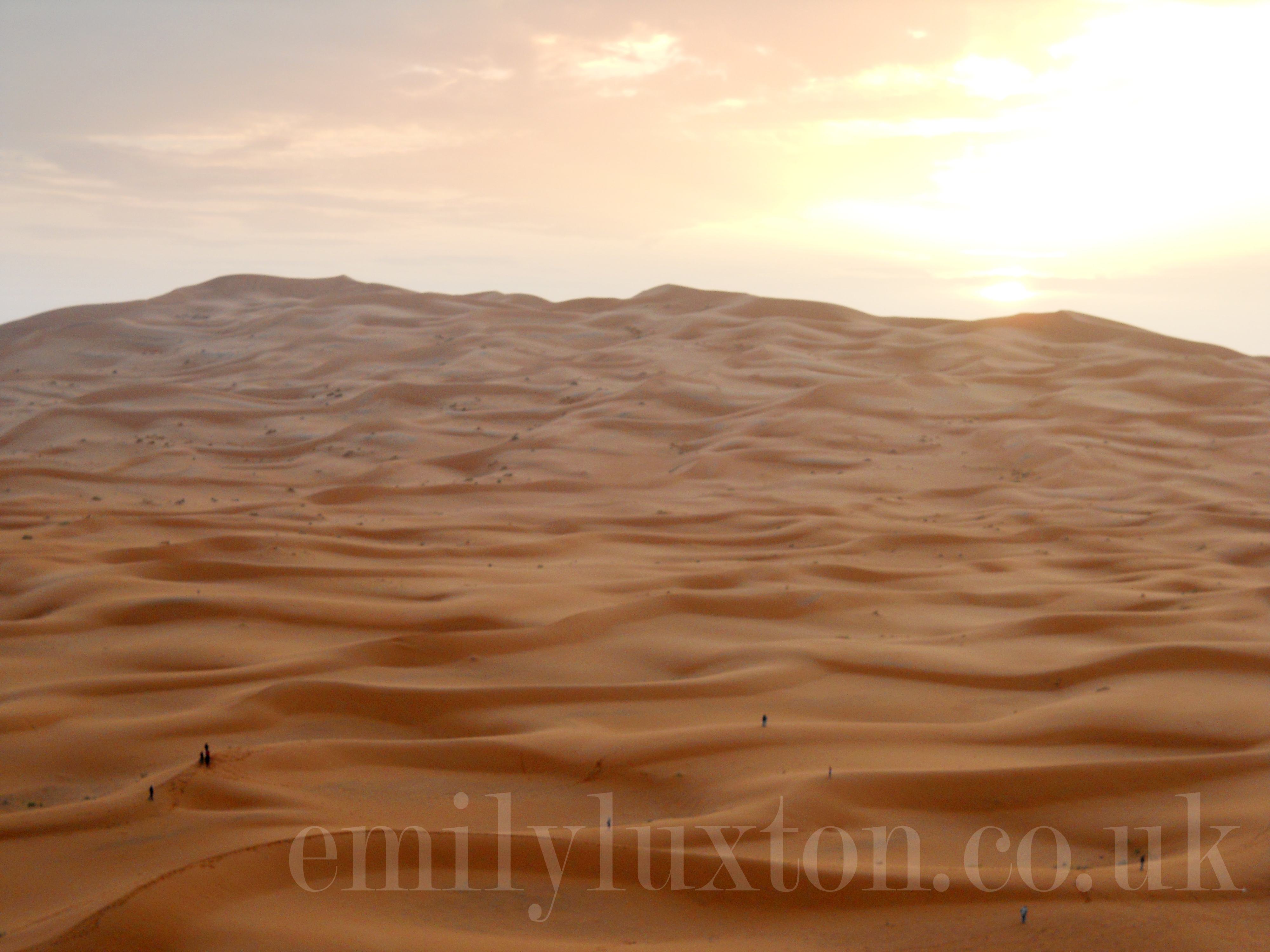 After a spot of “Berber whisky” (mint tea) we set off on the camels again. Bob Marley was even grumpier than me, and kept snarling and snapping at Jimi Hendrix. We were eventually moved to the front of the caravan to protect Jimi’s tail.

That morning, the skies were clear, and with no wind the dunes stayed flat and crisp, with none of the sand-smoke from the day before. The orange of the sand and blue of the sky made a beautiful contrast. The colour of the dunes is almost indescribable, more golden than orange, like a glowing amber. 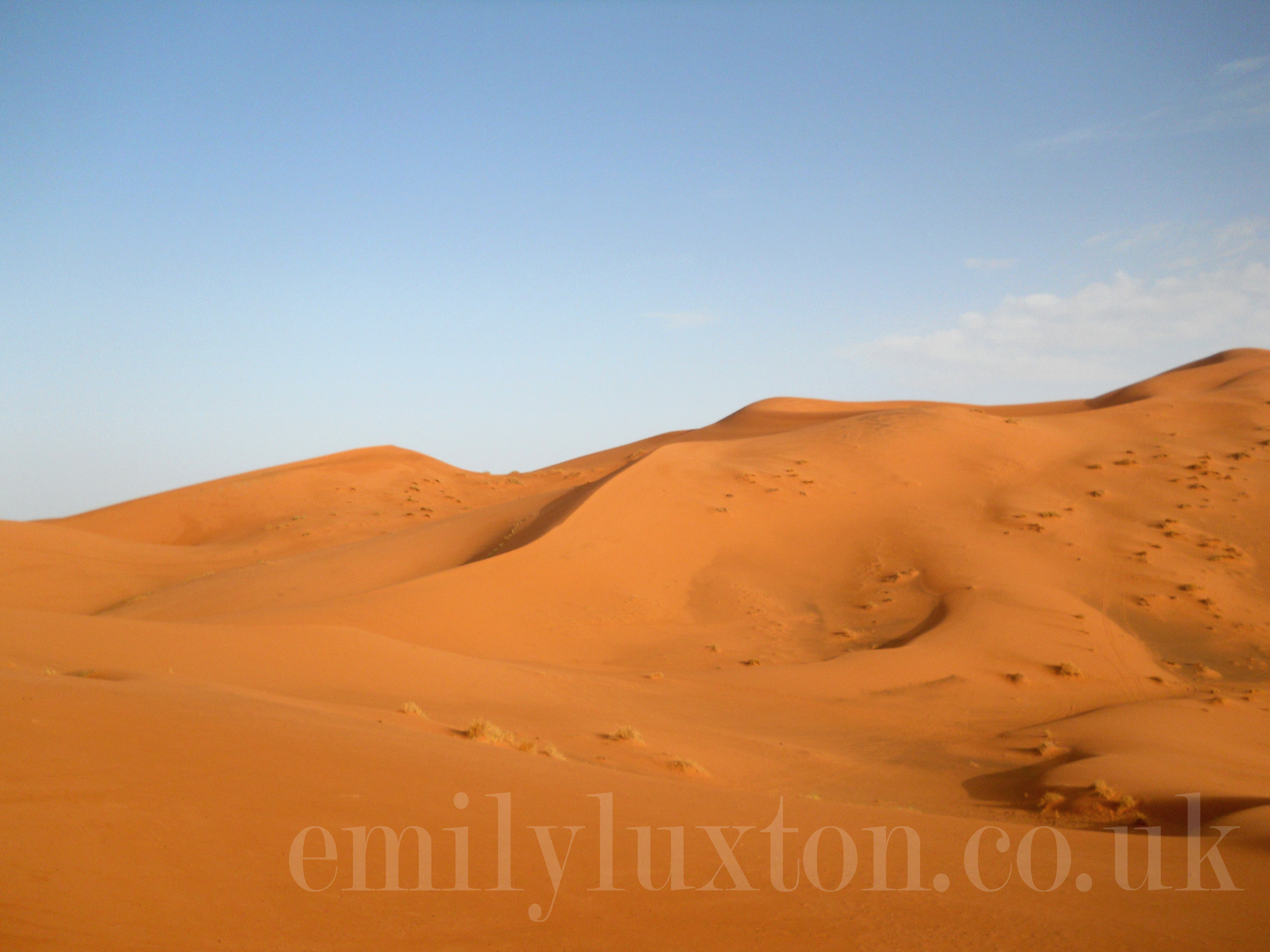 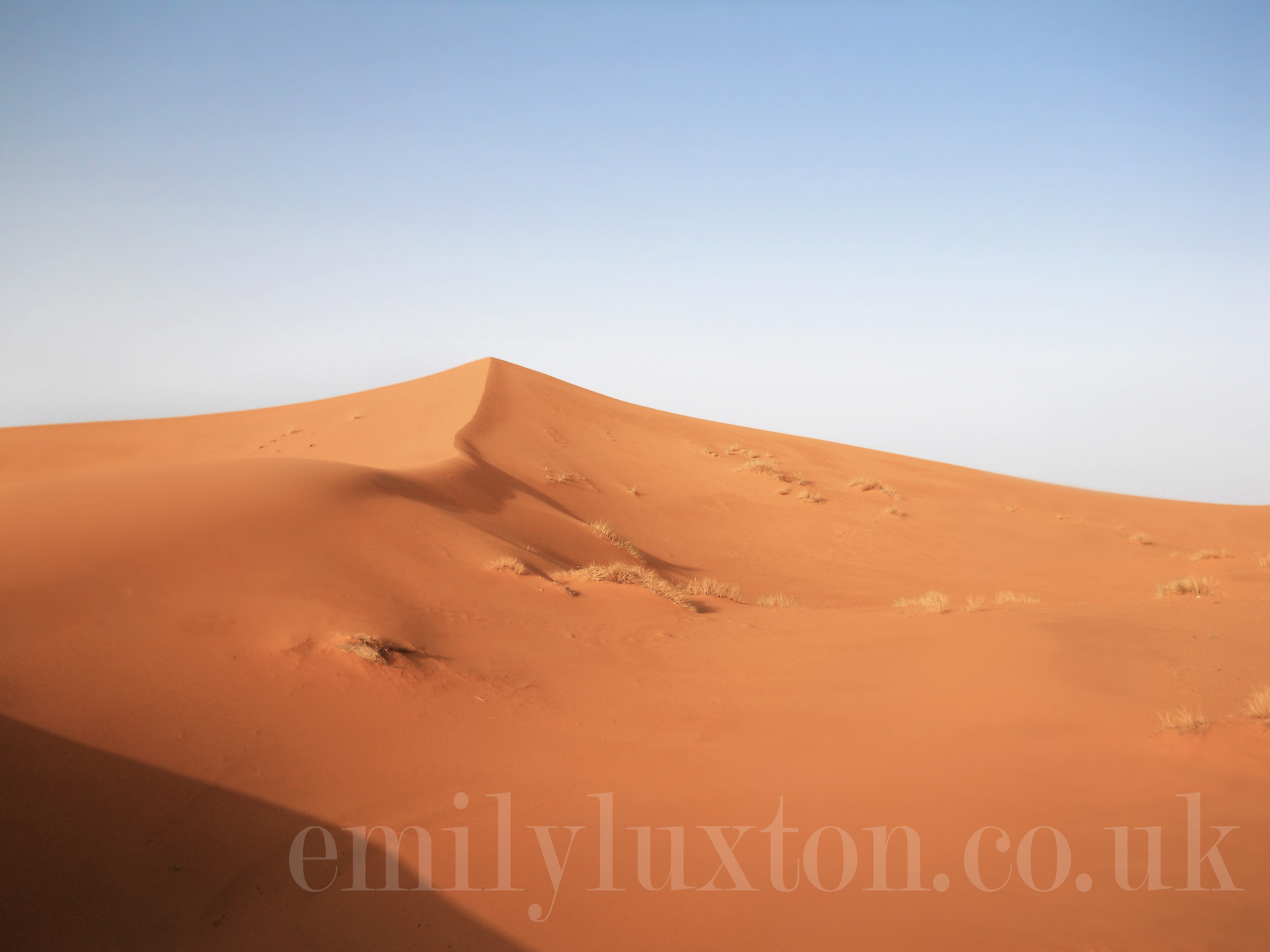 With no wind, the journey was much more easy-going and peaceful. The air was warm and fresh in the morning, and had that comfortable, almost edible beachey smell of warm sand. Hassan showed us how the dunes had changed shape overnight, new peaks had sprung up and old ones had diminished or stooped over. More talkative than last night, he kept shouting “lowk, lowk” (look) and pointing out interesting sites. Hassan showed us a “mouse house” and identified the tracks of mice, cats and foxes that had crossed the sand in the night; delicate patterns left behind in the
otherwise flat and untouched slopes of sand.

We got back at eight am, and it was already hot. After what felt like the best shower of my life, we had breakfast by the pool in the hotel. The whole experience was incredible, something I never thought I’d be able to do, and totally worth the twelve hour bus ride and the aching legs and all the other discomforts. The highlight of my trip, my night in the Saharan dunes is a huge tick for my bucket list and one of those memories that will stay with me forever.

READ MORE: How to Plan a Desert Trip in Morocco for all my tips on how to create a DIY trip to

If you’re looking for more adventures in Morocco, head to a surf camp like the one at Taghazout. The perfect contrast to a few days in the desert!

There are a lot of companies in and around Merzouga offering tours into the desert, but we booked ours through our hotel: Hotel Riad Mamouche – Ksar Hassi Labiad, Merzouga, Morocco.

5 thoughts on “Camel Trek and Camping in Merzouga, Morocco”