It was five in the morning and we were racing through empty darkness, cutting across a blank desert of unlit white, the headlamps of our jeep flitting on tyre tracks in the dust which were the only road we had to follow. Overhead was a bowl of stars, still dazzling even as the sky just above the horizon grew lighter: sharp, electric blue edging against the blackness.

The final day of our Salar de Uyuni tour was the highlight, the crowning glory of four days of touring stunning natural locations across south Bolivia. And it started with a serious bang – a hauntingly beautiful sunrise over the other-worldly landscape of the salt flats. As we sped towards Isla Inca Wari – a dark lump scarring the blank landscape with cacti silhouetted against the brightening blue sky – we saw the moon on our right hanging low above the horizon. Huge and round, it glowed flat and grey behind a thin lace of cloud, with it’s bottom lit into a firey, glowing Cheshire cat grin by the reflection of the approaching sunrise.

We climbed the rocky path to the top of Inca Wasi in darkness, past towering cacti sometimes twice my height. It was freezing cold, and each pant drew in gulps of icy air that hurt my chest and throat. We reached the top to find ouselves facing an enormous, empty sky that was glowing bright orangey-yellow and getting lighter all the time. The scene was like a film set, surreal, a huge sheet of light behind an empty desert landscape. We watched the sun rise between the huge cacti, silhouettes fuzzy with a haze of spines, but it was more a slow brightening of the sky than a sunrise, the sun itself took a long time to appear. Finally it burst over the horizon behind small, jagged hills in silhouette, illuminating the flat, white, salt desert surrounding us in pink and colouring the far mountains pale lilac.

With the sun up, the world seemed real again; the cacti were solid, coloured objects, the path underfoot was no longer a shadowy trail of hidden rocks, the desert was an expanse of white instead of blank darkness. We headed back down the hill to ordinary jeeps parked on gritty white salt that crunched like snow underfoot, and ate breakfast in the icy air with hot coffee and cake to warm us.

Driving through the salt flats was a bizarre experience, with nothing but flat, white, crusty earth in all directions. All the bad weather recently had blown in dust and earth, coating one side of each salt polygon so that looking in one direction we saw a desert of brown, while the other way it was bright white, creating a pretty weird effect. In the rainy season, the salt flats are smooth and wet and perfectly reflect the sky, but in winter when Bolivia is pretty dry, the salt flats dry up and instead the ground is a pattern of cracked white polygons, slotted together like crazy paving.

We stopped out in the middle of all this white nothingness for an hour or so, to take the “fotos locos” which play with the lack of perspective on the salt flats. This is much harder than it looks: lying on the ground holding the camera at precisely the right angle, with one figure minuscule in the distance, getting the focus right so that both the foreground and the background seem to be one plain… it’s very tricky! By now, the sun was fully up and the sky was bright blue, with the white of the earth dazzling our eyes.

Somewhere out in the centre of all that white and blue, we pulled up at a former salt hotel which is now supposedly a museum, although it looked a little more like a building site. The exposed salt bricks, missing walls and the sounds of repair work going on inside made it seem very much a work in progress. Apparently, the hotel used to be on the edge of the flats, but the salt grows every year and now the hotel is lost in the middle. You can only enter the museum if you buy something in the shop, but as we all paid 5Bs to use the bathroom we were allowed in anyway. The ‘museum’ turned out to be one very small room housing about six sculptures carved from salt. More picturesque were the world flags collected outside the hotel; strikingly colourful against the blank landscape and brilliant blue sky, they made for some really good, classic photos of the Salar.

Last stop before lunch was to view to small mounds of salt ready for exportation; conical white mounds  clustered together on the flats to dry out. Most of the salt harvested at Uyuni is used internally, but some is exported to Chile by train. Nearby is a small town on the salt flat, home to a tourist market and houses for the salt workers, where we stopped for lunch. Our wonderful chef, Dolores – who travelled in the jeep with us and spent the entire four days dozing in the front seat – played a pretty big joke on us when she had us all convinced that we were eating flamingo, but fortunately the tasty wings turned out to be from decidedly not-endangered chickens.

After lunch, we headed out of the salt flats and into Uyuni, where the tour finished outside the bus station. Instead of taking us to the Train Cemetery, the drivers just left us with our bags and gave us directions to the last stop of the tour, which was a disappointing end to an experience which had been, on the whole, good. But, we headed to the Train Cemetery alone (pictures in the next post), and the four day tour from Tupiza to Salar de Uyuni was a truly fantastic trip.

Want to know more about travelling in Bolivia? Check out the Bolivia section on my sister site, Backpack South America – and get in touch if you have a question.

A few frosty highlights from a Bolivia salt flats tour in May, at the start of the winter season. Plus tips on the best time to visit Salar de Uyuni.

Some posts on this site contain affiliate links. If you book or buy something through these links, I earn a small commission (at no extra… Read More »Uyuni Train Cemetery 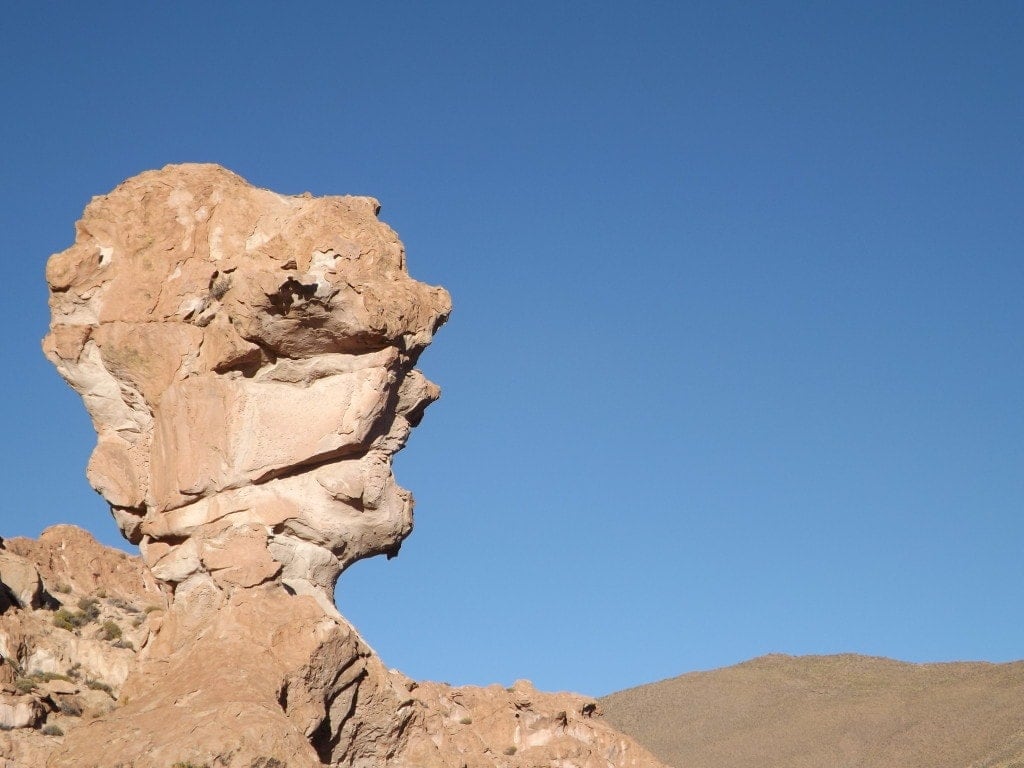 Some posts on this site contain affiliate links. If you book or buy something through these links, I earn a small commission (at no extra… Read More »Salar de Uyuni Tour, Day Three – Rocks and Bones