Following our fantastic experiences of the free walking tours in Cusco and Arequipa, we decided to kick off Bolivia with the free Red Caps City Tour of La Paz. We started in the Plaza San Pedro, where our two guides, Andrea and Mauricio, who were both really friendly and rea 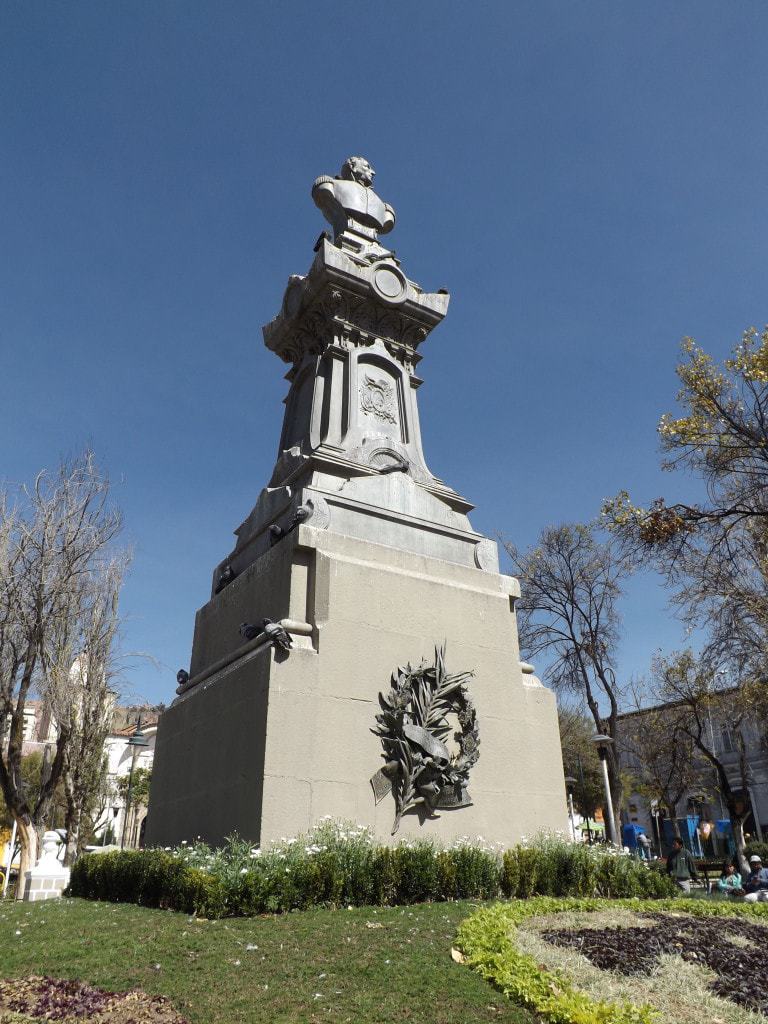 lly funny, started out by giving us a ton of information about one of Bolivia’s most infamous tourist attractions, San Pedro Prison.

Anyone who’s read Rusty Young’s Marching Powder will already know all about it, but for those who don’t the prison is a fascinating feature of La Paz with a really strange history. San Pedro has capacity for just 400 prisoners, and from the outside you can see how small the building 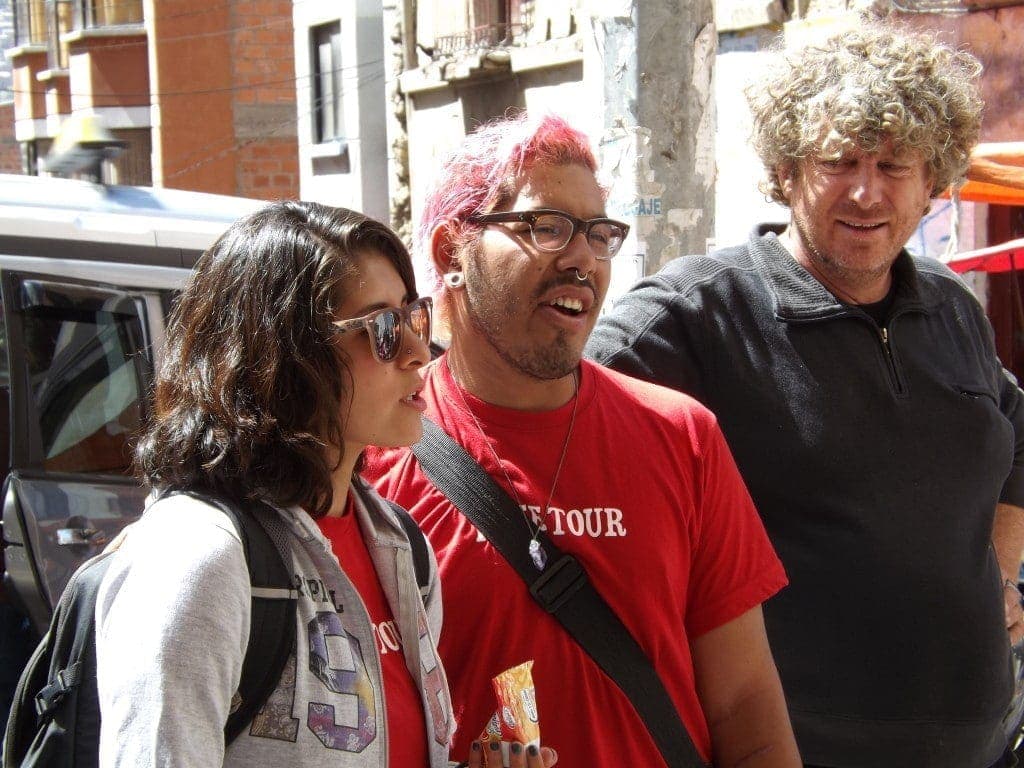 is, but currently there are over 2,500 people inside, including prisoners’ wives and children who live inside with them because they can’t afford to pay rent on two places at once. That’s right, rent: in order to stay in San Pedro – regardless of the fact that you’re there unwillingly – you have to pay rent, which varies depending on what part of the prison you stay in and how nice the accommodation is. Prices start at around 50Bs a month for a bed in a cramped, ten bed cell, and go right up to 5000Bs for full apartments complete with en suites, LCD TVs and kitchens.

With so many prisoners and other people living inside San Pedro, the number of guards, just fifteen, seems ridiculous, and that’s on a good day: on public holidays like the Labour Day Weekend, there can be as few as four guards at a time outside the prison! Since they need to pay rent, and to buy food, cigarettes and everything else inside the prison, prisoners need a way to earn a living. So, tons of businesses have sprung up inside San Pedro; salons, restaurants, coffee shops, spas, electrical goods, repairs. Apparently, the food places get the best income because Coca Cola pay them directly for exclusivity and advertising, and there are three deliveries of Coca Cola a week!

Other prisoners make souvenirs, and their wives head outside the prison every day to sell the handmade goods to unknowing tourists, while others still keep up the business they got into San Pedro for in the first place: drug dealing. A lot of coke is actually produced inside the prison, and dealers either sell it while they’re on day release, or they have a network of dealers outside the prison to do the job for them (and risk their own cosy spot in San Pedro). Mauricio and Andrea showed us a small hole in the roof of the prison in the left hand corner, through which the coke producers throw packages wrapped in nappies for someone waiting outside to pick up and deal. During one of the Red Caps tours, they actually saw a package fly out of the prison roof and land on the pavement, but because so many tourists noticed the police, who usually turn a blind eye, felt compelled to pick it up!

San Pedro prison is famous amongst tourists thanks to Marching Powder. The author actually spent a few months living in the prison with a British prisoner, Thomas McFadden, and the book is all about him. Thomas, arrested for smuggling coke in Bolivia, was living in San Pedro prison and decided to run tours as a way of making money, and San Pedro became infamous amongst backpackers as an unlikely tourism destination. Nowadays, following numerous assaults and stabbings (there are no guards inside the prison, so it’s pretty dangerous), the government have shut down the operation, and anyone who offers you a tour of the prison is either going to take your money and run, or worse, leave you inside San Pedro with no passport, no money and no way out.

From prisons and scandal, we headed up the road to a more normal corner of La Paz life; the huge open-air market. In the fruit and veg section, we passed dozens of traditionally dressed, double-plaited cholitas, all seated at stalls laden with vegetables, bananas, app 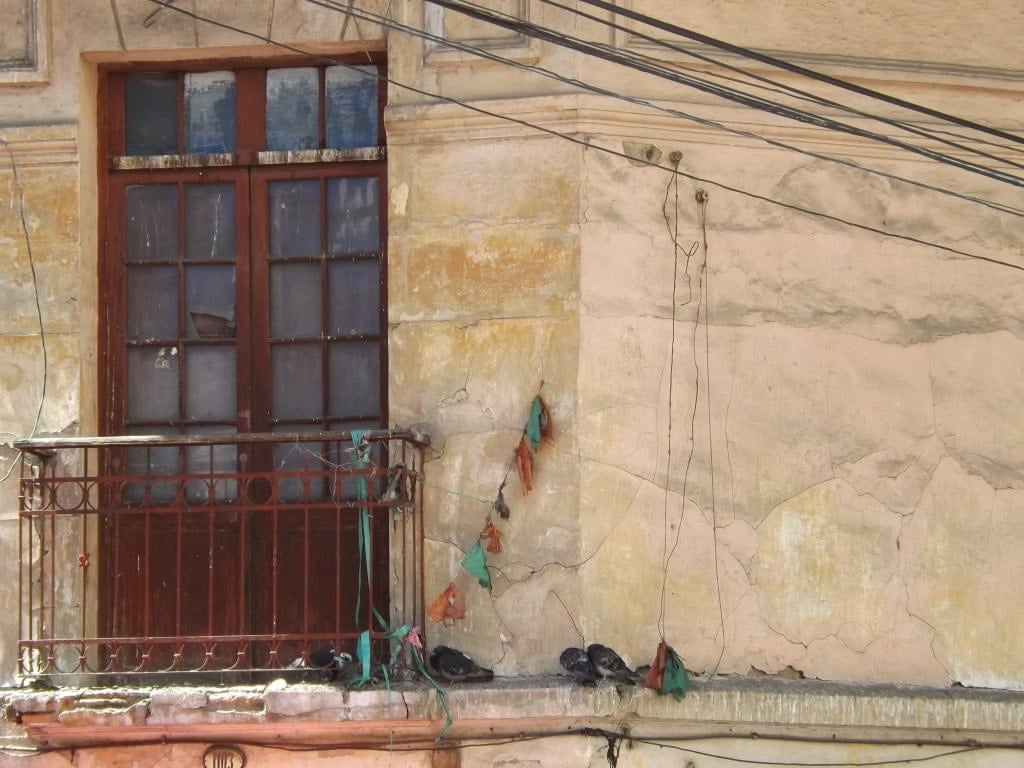 les, exotic fruits, and endless potatoes, including the tiny, pebble-like white potatoes which are dried out following an Inca technique and which, apparently, keep for up to twenty years. With every stall selling exactly the same selection of goods, it’s hard to know how any make a living, but our guides explained that everyone who shops at the market has their favourite lady, and go to her again and again, so actually it’s the women with the best gossip, banter or conversation that get the most customers. Once you’ve shown one cholita a bit of loyalty, she will start to give you the “yapa”, a local term meaning “the little bit extra”, and maybe give you a couple more apples for the same price everytime you visit.

The guides were also full of a lot of funny facts about cholitas. I mentioned before that these big, plump women, dressed in about twenty skirts at a time and with as many cardigans, are ridiculously strong, hoisting sacks of potatoes as big as me onto their backs and plodding uphill without a problem. The small bowler hats they wear were apparently a result of a mistake by an Italian company; they set up business shipping hundreds of hats to South 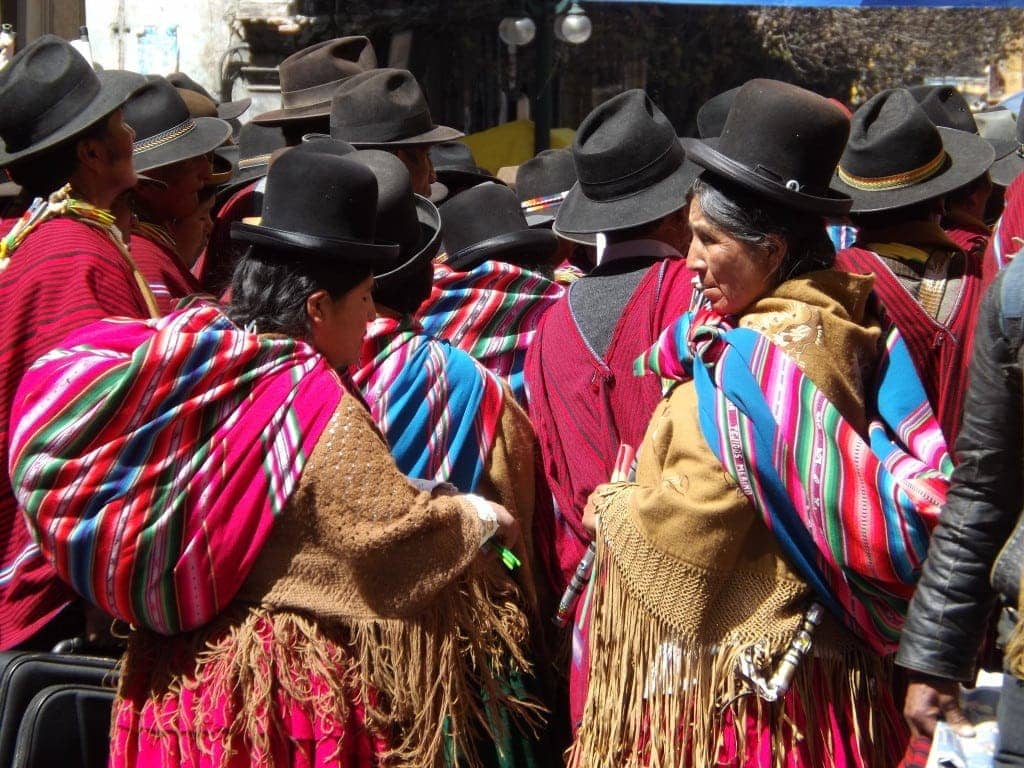 America for the indigenous men to wear in imitation of their colonial masters, but unfortunately sent over a boat-load of hats that were way to small, and couldn’t sell them. Not wanting their investment to go to waste, the company quickly marketed the hats to indigenous women, instead, saying that they were the latest trend amongst European women. The women apparently loved the hats, and have been wearing them ever since, so that they’ve even become a symbol of relationship status; a hat worn straight up means the lady is married, while one tilted to the side means the cholita is single or widowed and available for marriage. Flirting is even more bizarre: according to Mauricio, the sexiest part of a cholita is her calf, which is usually covered up by her many heavy skirts. So, when she wants to flirt, a cholita will pull the skirts up slightly, revealing her “big, juicy, brown calf” (Mauricio’s words), and if the man is interested he’ll then start to chase her, while all the while the cholita pretends to protest.

It all sounds pretty bizarre to Western ears, but actually the cholitas are really well respected amongst Bolivians and to dress as they do is considered a sign of status. Apparently, the best outfits can cost thousands of dollars to put together, so the more money a cholita has the nicer her clothes, and, as a result, the higher her status.

On the outskirts of the market, we also walked through the small witches market, where stalls were laden with bones, feathers, amulets, and hundreds of furry, skeletal dried lama foetuses, which looked like macabre puppets. Mauricio – dramatic, gay and very camp – was full of funny f 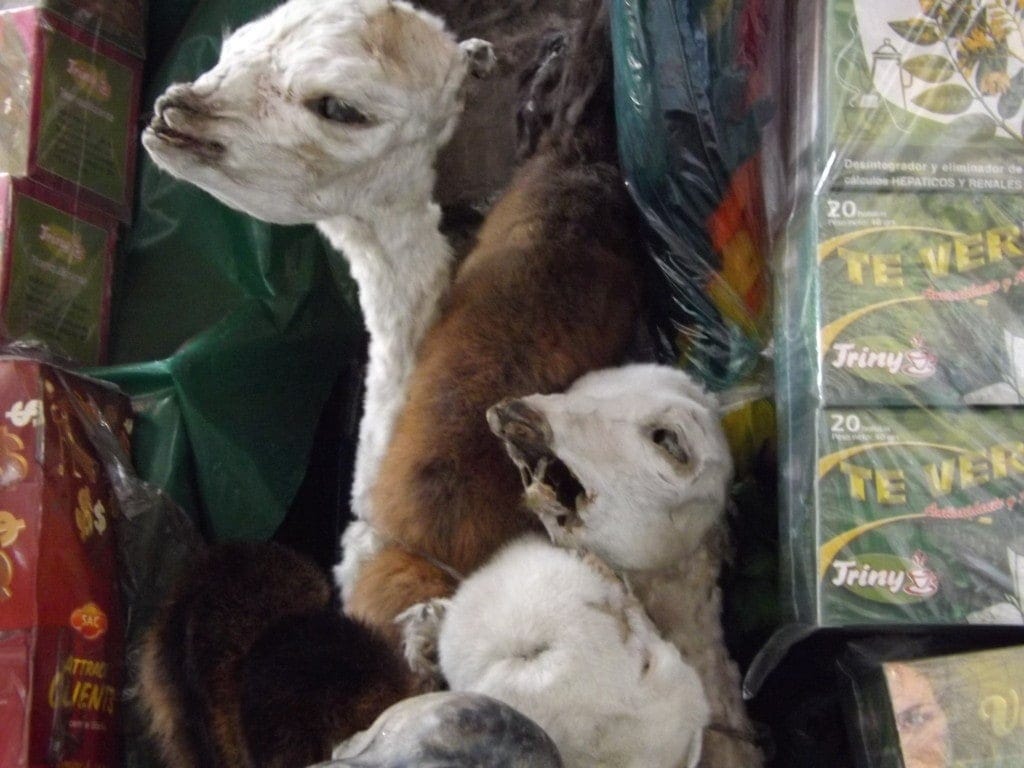 acts about the kinds of potions of offer, from a spell to make your lover become your slave, obeying everything you say, to a Viagra type pill meant for horses which resulted in a lot of men turning up dead on ‘prostitute alley’ up in El Alto. He particularly enthused about the “follow me, follow me” and “come to me, come to me” dusts, which he hopes to use on n 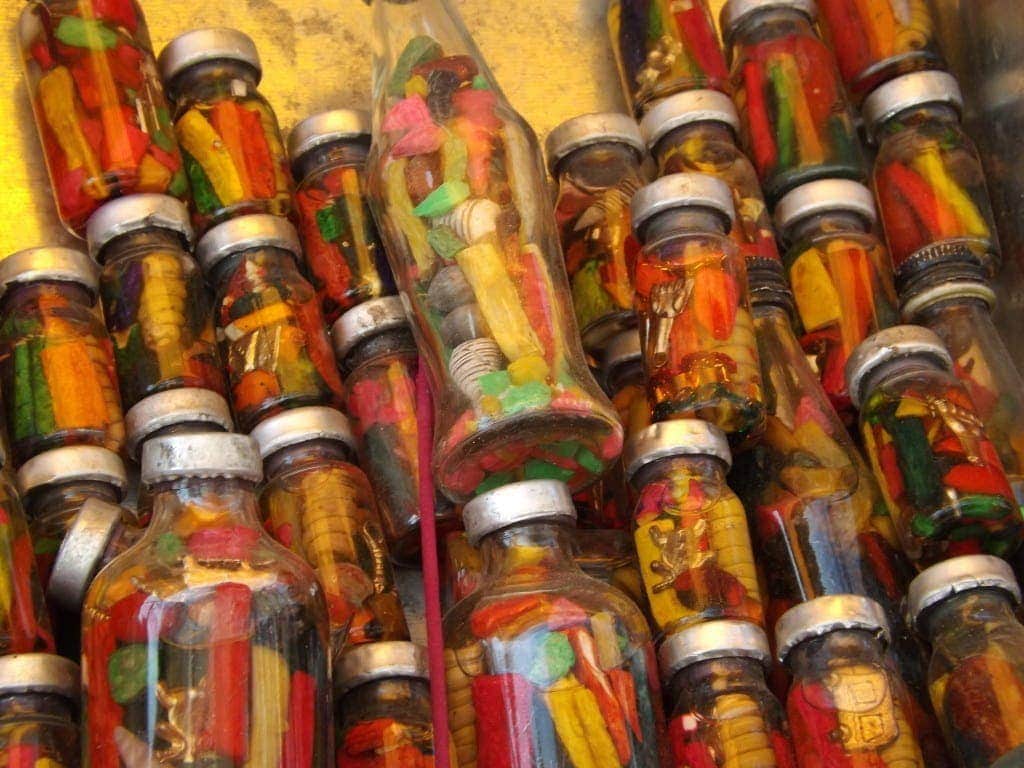 ewly single Prince Harry, the first of which makes your unsuspecting victim fall obsessively in love with you, and the second of which will essentially get their pants off. The guides also talked about some of the rituals which still go on today, usually to ask Pachamama (mother earth) for luck, money, or possessions. When a new property is being built, a ritual will be carried out to bury a lama foetus under the foundations, which will ensure the success of the project.

An urban legend, which our guides both sincerely believed in, says that for larger properties, like hotels and apartment buildings, a much larger sacrifice is required. A witch doctor will head out into town 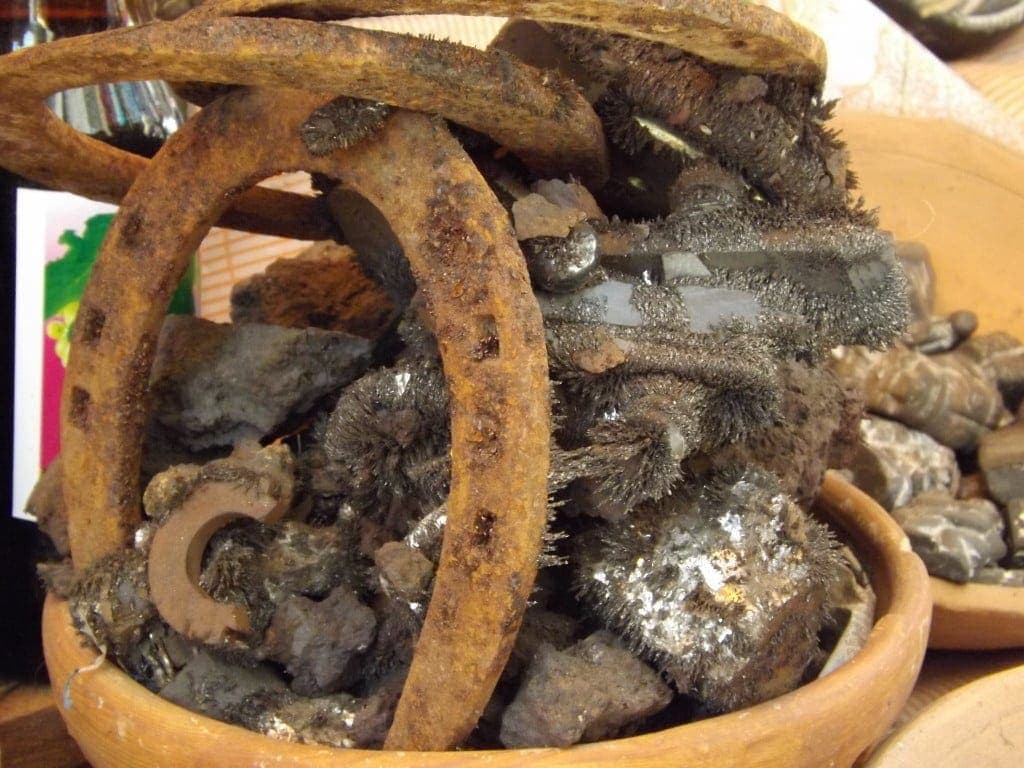 after dark and, so the story goes, find some homeless people to get drunk with. Eventually finding the tramp with the least to lose, with no family to miss them etc, the witch doctor will get the poor victim so drunk that they pass out, and then use them for a much larger, more elaborate ritual in which the homeless person will be sealed into the building’s foundations with concrete, still alive so that Pachamama can kill him herself.

From that disturbing tale, true or not, we headed back out into the light for a look at the San Francisco church, and then into another market, Mercado Lanza. where we tried so 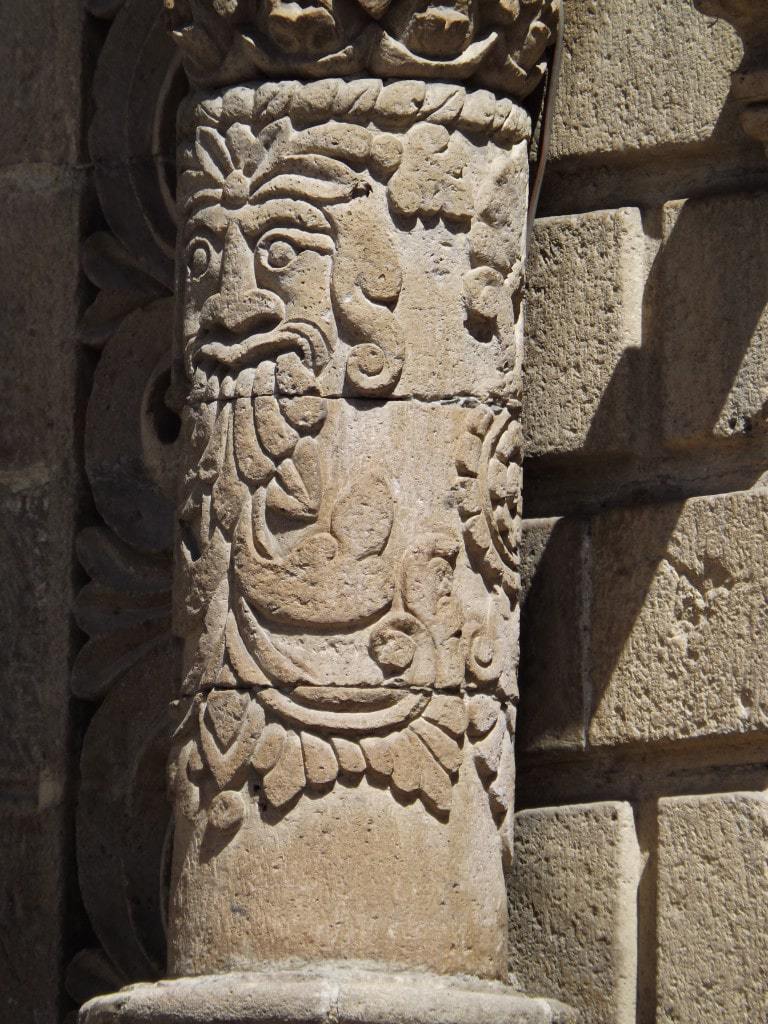 me delicious fruit smoothies for just 8Bs each (80p) and some rellenadas, fried potato cakes stuffed with meat, veg and hot sauce.

Then it was up to Plaza Murillo for a view of the presidential palace and some history of Bolivian politics, which was pretty fascinating – and violent. As recently as 1946, President Villarroel, was thrown from the palace balcony and hung from a lamppost by a mob. The guides also had a lot of great stories about the current president, Evo Morales, bu 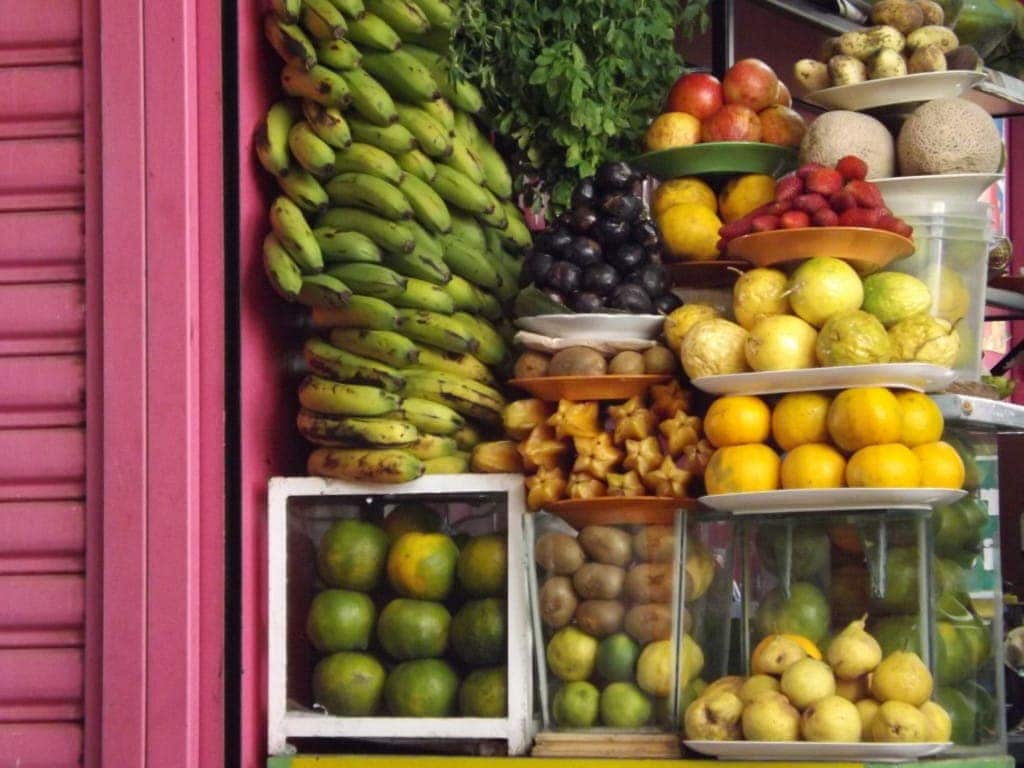 t we went to the final stop of the tour – on the 17th floor of the El Presidente hotel – to talk about him.

It seems as though the president has done a lot of good for the country, from the brand new, solar powered cable cars around La Paz, to securing the country’s economy, to converting the Republic of Bolivia to the Plurinational State of Bolivia, uniting and recognising all the indigenous groups within Bolivia. However, he’s also frequently put his foot in it during speeches or announcements, with a lot of humorous effects. Reportedly, Evo once announced that eating too much chicken will make you gay, and 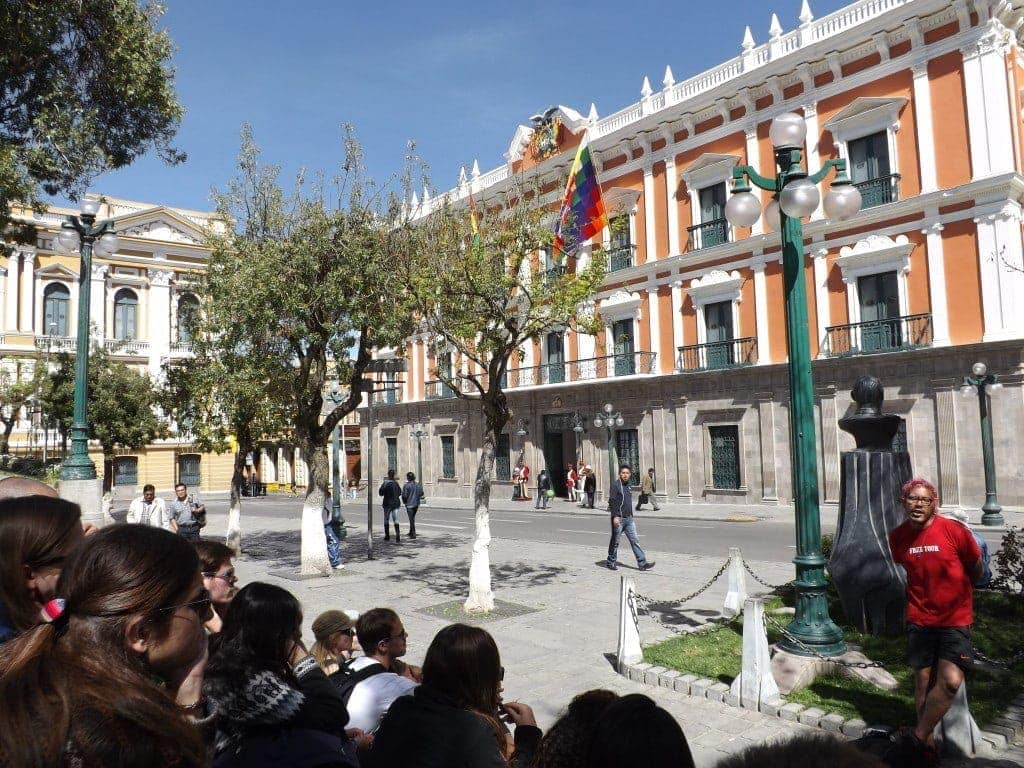 drinking too much Coca Cola will turn you bald, subsequently having to publicly apologise to chicken farmers, homosexuals, Coca Cola and bald people. Returning from a trip around the world, the Bush-esque president declared to his press team what he’d learnt; that Bolivia has the highest number of Bolivians living in it. Attempting to combat the country’s low population, Evo tried to raise the tax on condoms, charge taxes to women over 18 that had not yet had a baby, and give bonuses to women who had. He later withdrew the first two actions, and publicly apologised to women (and, presumably, makers of condoms). I’m pretty sure that he’s made even more comical mistakes over the years, but in general it seems he’s a good president!

Tour concluded, I stayed where I was on the seventeenth floor of the hotel to experience Urban Rush, which I’ll save for another post!

Tours leave from Plaza San Pedro (under the statue) at 11am and 2pm everyday – look for the Red Caps!