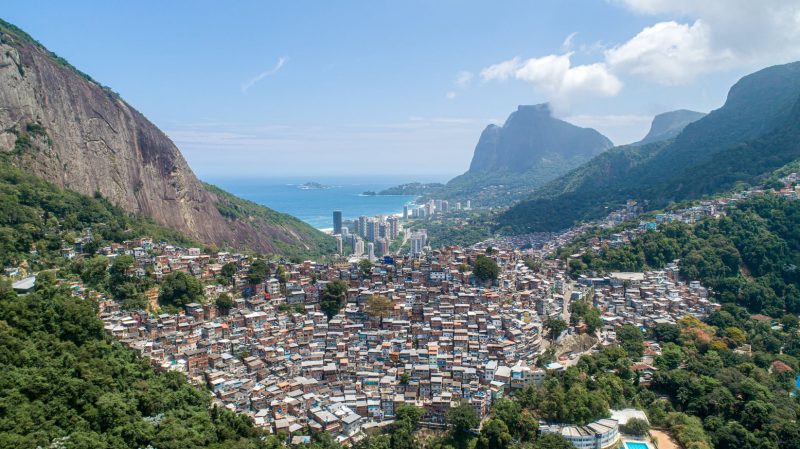 It was three in the morning. I was lying awake in my bunk in a tiny hostel room that still smelled of fresh paint. The hammering and shouting outside the door that had pulled me violently from sleep took a momentary lull. Then, another shout in Portuguese – I assume a warning – and the door flew off its hinges with a bang.

In hindsight, staying in a favela in Rio de Janeiro was probably not the best idea I’ve ever had. But we were desperate, the rates were cheap, and I had it on very good authority (the word of one girl I barely knew) that the newly opened Hostel Rocinha in Rio’s least sketchy favela was “meant to be pretty safe”.

It was during the 2014 World Cup, and right at the end of a backpacking trip that had burned almost all the money in my bank account. Hotels across Rio were booked up, hostels had inflated their prices by ten times, and I had nowhere to stay. Until a random girl we met told us about a brand new hostel. It was available, it was affordable, and it seemed pretty perfect… except for the whole favela part. 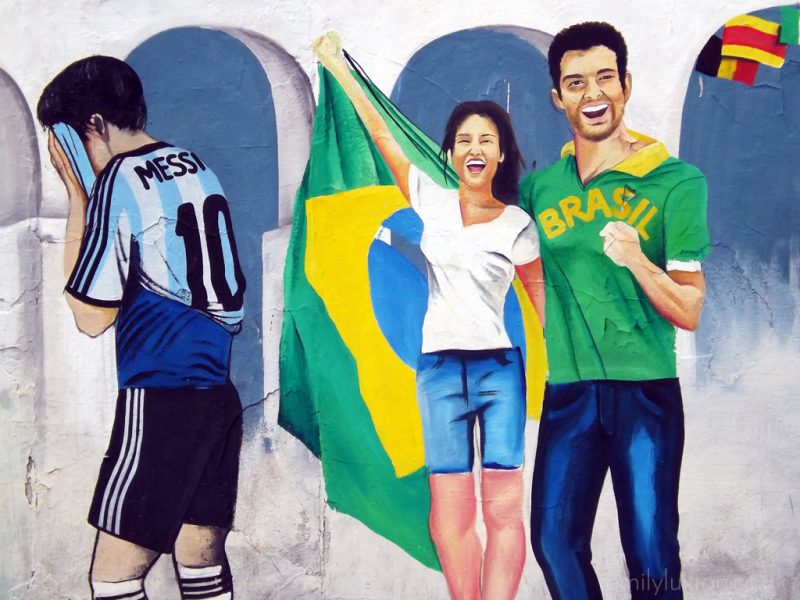 How bad can staying in a favela in Rio be?

It felt like a foreboding sign that even reaching the hostel proved difficult. After crawling for two hours through a grid-locked Rio beneath thundering skies on a rickety public bus, we went through taxi after taxi trying to find someone willing to drive to Rocinha. Standing in the rain with our backpacks, hailing down cabs which all took one look at the address scrawled on my notebook and drove away, we began to lose hope.

Night had fallen when someone finally picked us up. It took half an hour to drive a distance that could have been walked in ten minutes, then the driver stopped at the very edge of the favela and refused to take us any further.

We were already in the second cab before we realised the driver was drunk. He swerved dangerously up the hill, occasionally slowing and winding his window down to check out girls on the street as we passed. Thankfully, we made it: finding ourselves outside an unappealing building half-hidden behind a mess of apartment buildings and filthy cafes. 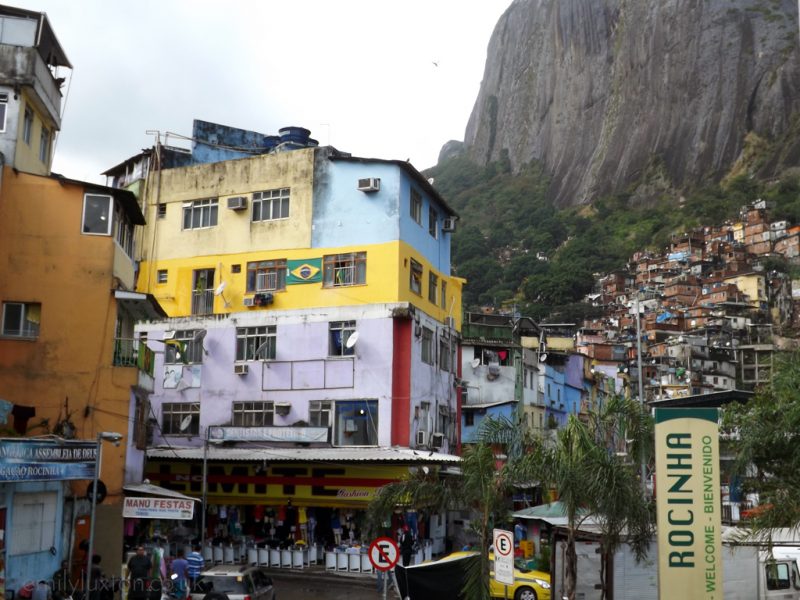 The edge of Rocinha. I barely took any photos as I didn’t want to take my camera out.

The building was old and higgledy-piggledy, its dilapidation hiding bravely behind fresh coats of white paint. Extremely fresh – still wet in places. It was as though several apartment buildings had been merged haphazardly into one, and a hostel had sprung up in the midst of the chaos and opened its doors to desperate travellers before it was even halfway complete.

As we checked in, they were still building the reception. Someone was painting a wall, and a steady stream of furniture and boxes followed us through the door, disappearing into the bowels of the maze-like hostel. It felt like arriving at someone’s house on moving day.

We had to wait three hours for them to build our room. When we finally got inside, it smelled strongly of paint and the sweet woody scent of freshly unpacked flat-pack furniture. The box for the just-built bunk beds was still in the corner. Wet paint came off on my fingers when I pressed the light switch.

At least we’d lucked out with a room to ourselves, I thought, because there was clearly no room for any more beds in that tiny room.

How wrong I was… 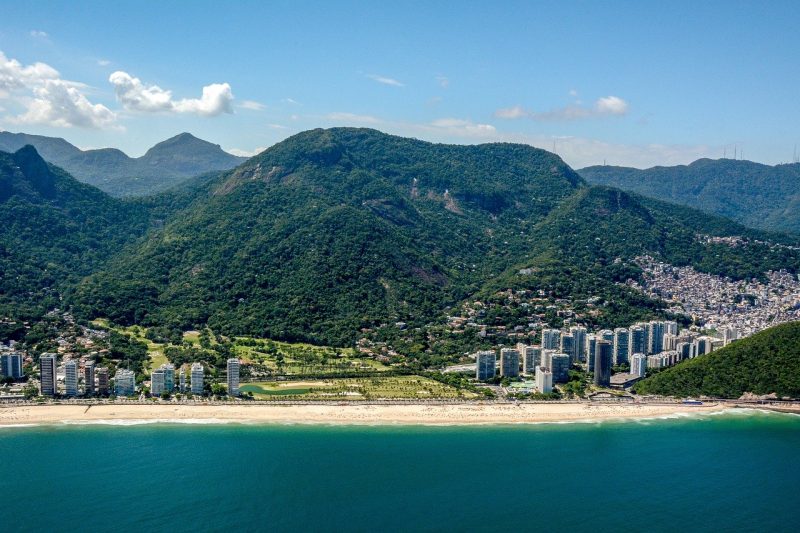 The difference between Rocinha Favela, towards the right, and Rio’s more upmarket seafront.

3 am Wake Up Call

Wrenched from sleep at 3am, we awoke to angry shouting and someone pounding on the door.

When I tried to answer it, the key snapped off in the freshly-white-painted lock, trapping. Outside, the yelling and jiggling of the door handle continued. I couldn’t tell if we were being robbed or kicked out of the hostel. Perhaps they were rescuing us from a fire?

The hammering reverberated around the hostel. Eventually, someone emerged from one of the other dorm rooms to provide a half-asleep translation service. It took a while, but eventually, we made the small crowd in the hallway understand that we were stuck inside.

Then they broke down the door.

Next thing I knew, two hostel employees were in the room, unpacking a second set of flat-pack bunk beds a foot from my head and starting to build. Two new guests, Argentinian brothers in town to watch their country in the finals, had arrived in the middle of the night and our tiny, two-bed dorm was becoming a four-bed. In fact, by the end of our four-night stay in Rocinha Favela the hostel staff somehow managed to fit a third set of bunk beds in, blocking the door to the bathroom and leaving no room for anything except shimmying sideways between a maze of beds to reach the door. 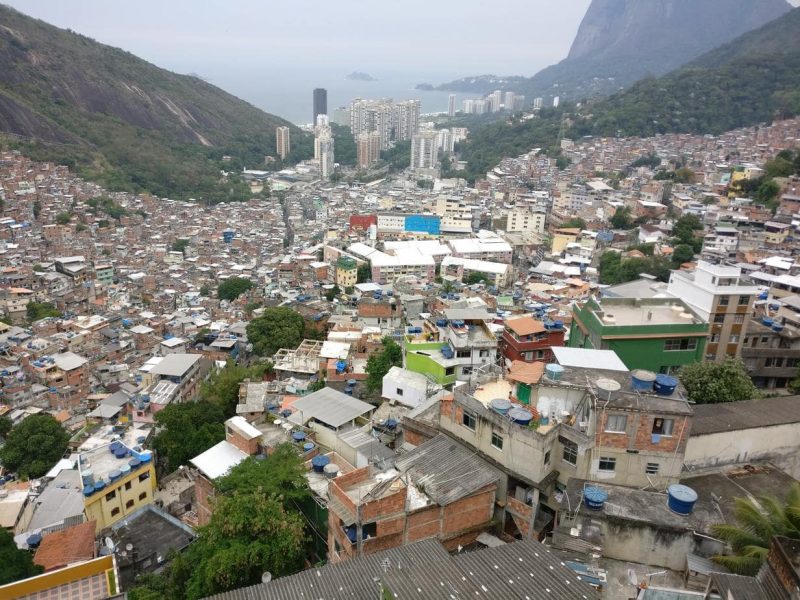 Later on, the whole thing just seemed funny. Especially when, the next day, I heard rumours flying around of break-ins, fights, a raid from a cartel. At the time, it was annoying, but over four days staying in a favela in Rio it was the only bad thing that happened.

By the light of the next day Rocinha Favela itself wasn’t so bad. It was chaotic and colourful, but it felt much more like the “real” Rio than the more upscale districts we explored on foot over the next few days. The people we met were lovely Our stay there is one of the most memorable things about my trip to Brazil in general!

That hostel doesn’t appear to be there any more, but other, nicer-looking hostels have sprung up in Rocinha Favela since my visit. If you’re planning on staying in a favela on your trip to Rio, go for it. Be careful, obviously: lock up your valuables, avoid going out after dark – especially alone – and listen to any advice that your hostel staff give you. But this is an amazing glimpse into a very different side of Rio de Janeiro. 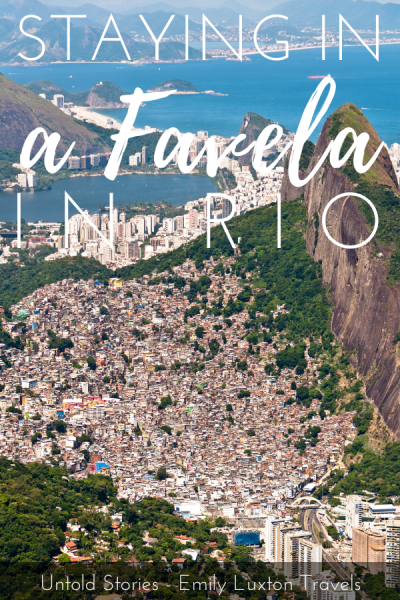