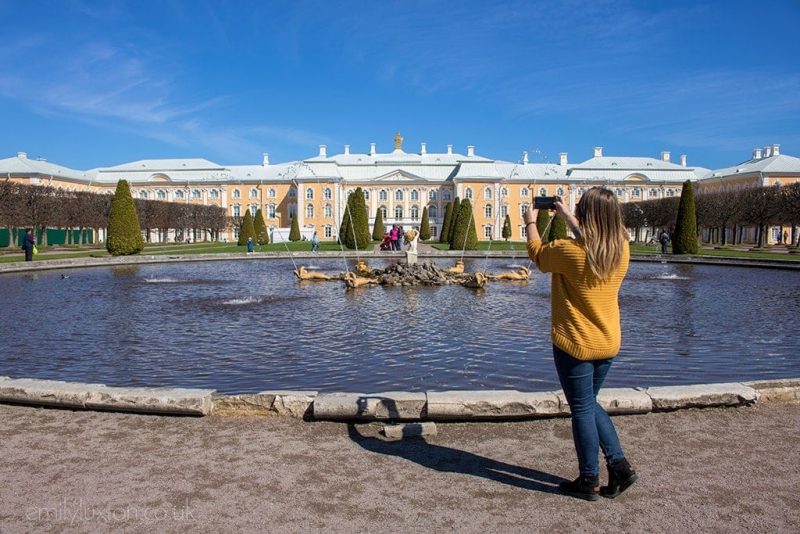 One of the absolute highlights of my recent Scandinavia and Russia cruise on board the Regal Princess was spending two days in St Petersburg. This city has been on my wish-list for years, probably ever since I was a dorky tween obsessed with the movie Anastasia!

I had no idea what to expect, but what I discovered was a surprisingly pretty city rich with culture. From art-filled museums and ornate palaces to wide, tree-lined boulevards and beautiful ballets… there’s just so much to see and do. Keep scrolling for my top ten things to do in St Petersburg – whether you’re visiting on a cruise or independently!

READ MORE: Check my Regal Princess review to find out more about the ship and our itinerary!

Russia on a Cruise Visa – The Lowdown

Getting a tourist visa for Russia is a notoriously difficult and lengthy process. For many, the easiest way to visit Russia is on a cruise, as this allows you to visit through certain ports for up to 72 hours without a visa* – as long as you have a tour booked through an officially licensed company.

It doesn’t need to be a cruise ship tour, but if you book a tour through Princess Cruises they guarantee the ship won’t leave without you – even if you get back late. Given how slow the beurocratic process was everytime we got on and off the ship in Russia, I’d say you might need this guarantee! Plus, by booking through Princess Cruises you have an absolute guarantee that your tour tickets will be accepted by the Russian border control. They were pretty fierce in my experience so you want to be 100% certain you have an official tour receipt – otherwise they might just not let you in!

*You can check the latest official travel advice on the UK government’s website. 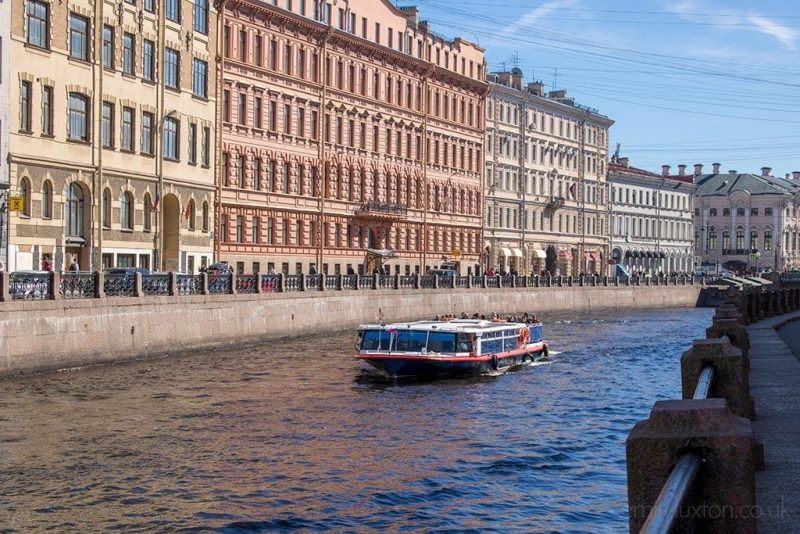 10 Things to do in St Petersburg

We sampled all of the top things to do in St Petersburg with the Princess Cruises 2 day Best of St Petersburg tour. But if that sounds too full on, there are plenty of smaller tours to choose from. Take a read of my list below and choose which highlights really take your fancy!

TOP TIP: If you’re not a fan of group tours, or just want some time to explore solo, Princess have a tour for that! There’s a Hermitage Museum tour which includes 3 hours of free time in the city centre, which gets you around the entry requirements whilst still getting to discover the city on your own.

I’ve got to confess, I wasn’t overly excited about our first stop. An art museum? Bor-ring!

But it turns out that the Hermitage Museum in St Petersburg is absolutely amazing – and I’m not just saying that. If you do one thing in St Petersburg, make it this. The Hermitage is made up of a complex of palaces, including the Winter Palace, which was built by Peter the Great. You’ll learn a LOT about Peter the Great in St Petersburg. He was the first emperor of the Romanov dynasty, and founded the city – which he named after himself. So he’s a pretty big deal there. 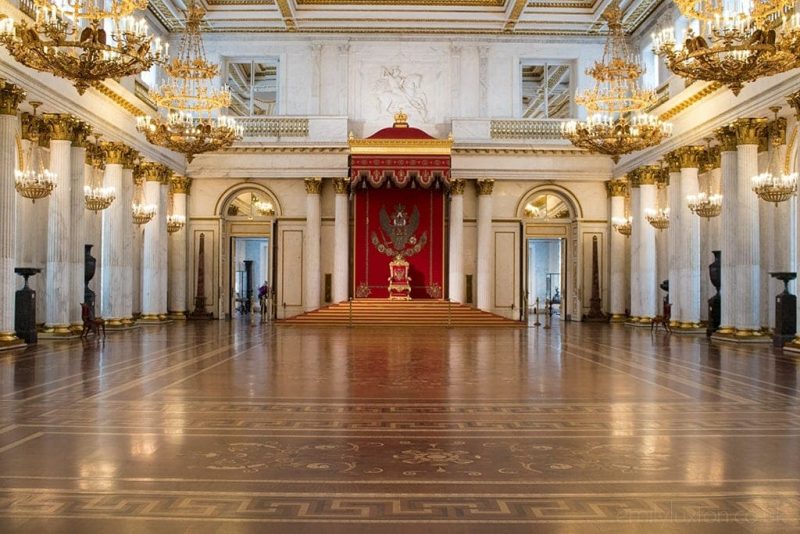 But the extravagantly decorated Winter Palace is only one small part of the Hermitage Museum. I was far more interested in the museum’s founder, Catherine the Great, who began an impressive collection of paintings and sculptures in 1764. She seemed like a fabulous character – had her husband killed, enjoyed a string of lovers, covered everything in gold, collected a lot of art. Definitely worthy of the “great” title! Today there are around three million items in the collection at The Hermitage, and they reckon that if you gave all of them a minute each it would still take nine years to see it all. So don’t try to rush this museum!

TOP TIP: If you really want to see the Hermitage at its best, I recommend paying extra for the early entry, like we did.  As we left, the crowds were already coming thick and fast, and the queues were around the block. So getting all the palaces and rooms to ourselves for an hour or so was absolutely sublime. 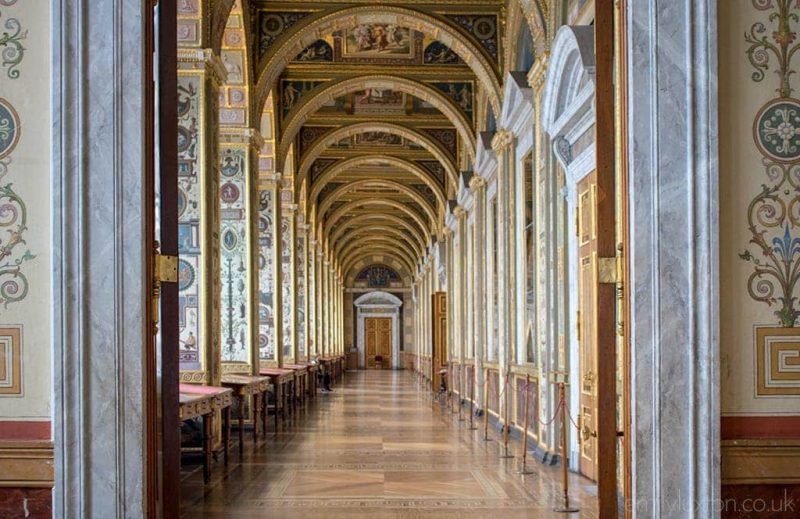 St Petersburg is often called the Venice of the North, thanks to all the city’s canals. Peter the Great was heavily influenced by Amsterdam when he had St Petersburg designed, and the centre is filled with canals. So there’s no better way to see St Petersburg than from the water!

We had a VIP tour organised by Princess Cruises, so we sipped champagne as we cruised the canals in the sunshine. Such a gorgeous way to explore and another must-do in St Petersburg. 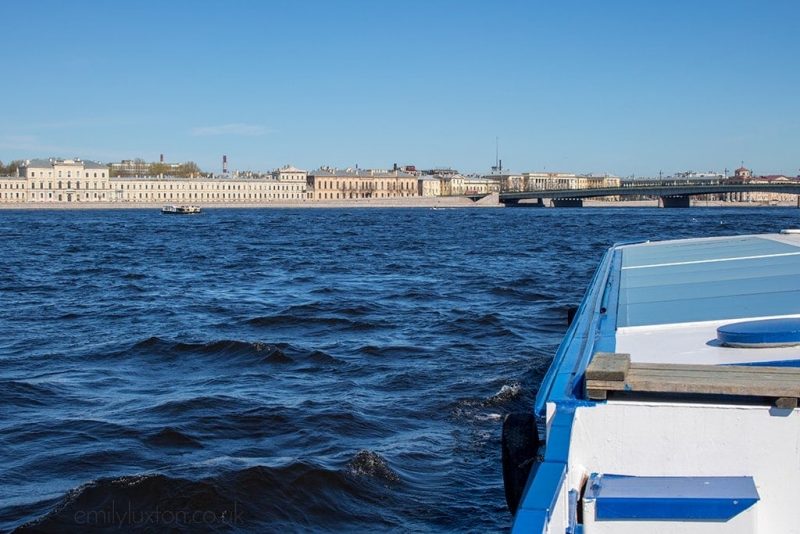 My absolute favourite spot in St Petersburg was the sunny yellow Peterhof Palace. It was built by Peter the Great (who seems to have built everything) and decorated to extreme extravagance by his gold-loving daughter Elizabeth. During WWII the palace was occupied by the German Army, who burned it down when they left – almost completely destroying it. The palace has been restored in exacting detail, with work still going on today. 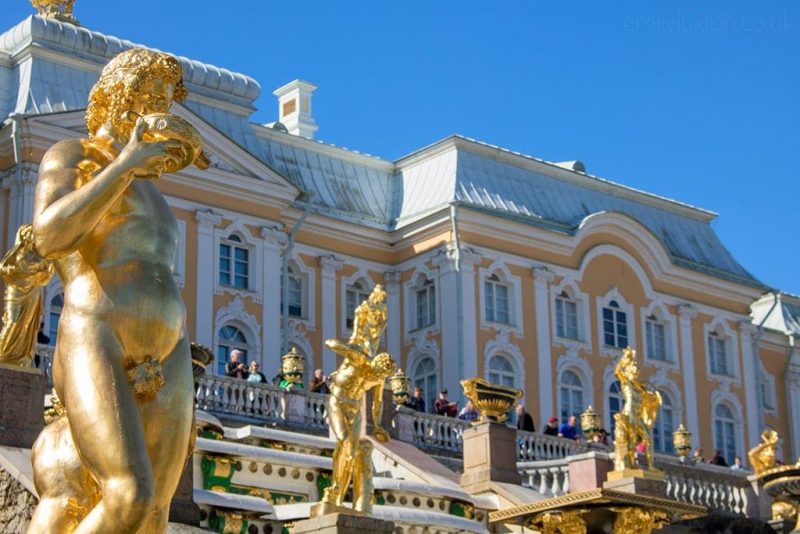 Exploring inside the palace was NOT the most fun experience in the world. Even though cruise ship tours get early entry, the museum staff are keen to get everyone around that place as fast as possible. You’re can’t stop too long or even look as though you might touch something, without a grumpy babushka barking at you in Russian! It kind of felt like one massive queue through a series of pretty rooms you couldn’t actually look at.

But the gorgeous palace exterior and extensive grounds more than made up for it. Make sure you’re in the grounds at 11am to watch the daily spectacle of the fountains being turned on. It’s done to music with an unnecessary amount of fanfare – and I loved it! 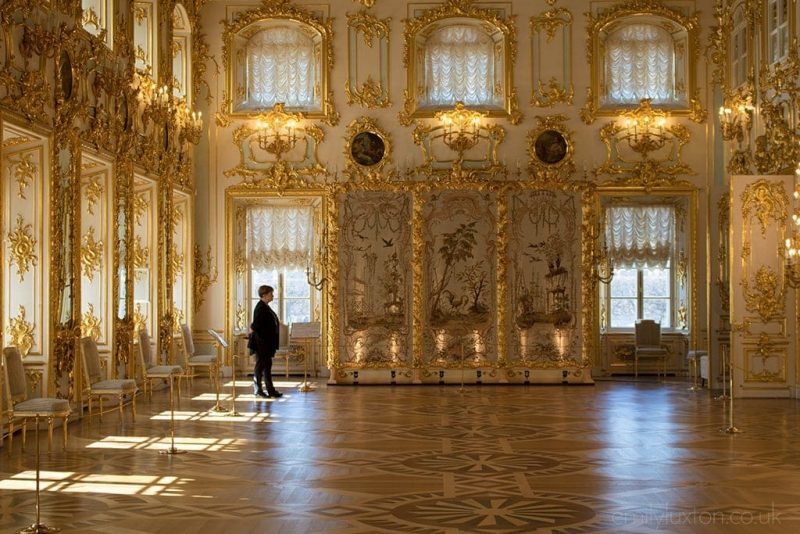 Russia is famous for ballet, so if you’re in town for a night you really must try to catch a show. We booked onto an evening ballet excursion with Princess Cruises at the Alexandrinsky Theatre. I’d never considered going to the ballet before – it just didn’t seem very “me” – but recently I caught a rehearsal at the Grand Theatre in Havana, and fell in love!

Even if you don’t think you’ll be into it, you should definitely give it a go. We saw Swan Lake, a true Russian ballet written by Tchaikovsky – and it was genuinely breath taking. I’ve never seen people leap so high or twirl for so long. One of the absolute highlights of my cruise, and such a special experience. 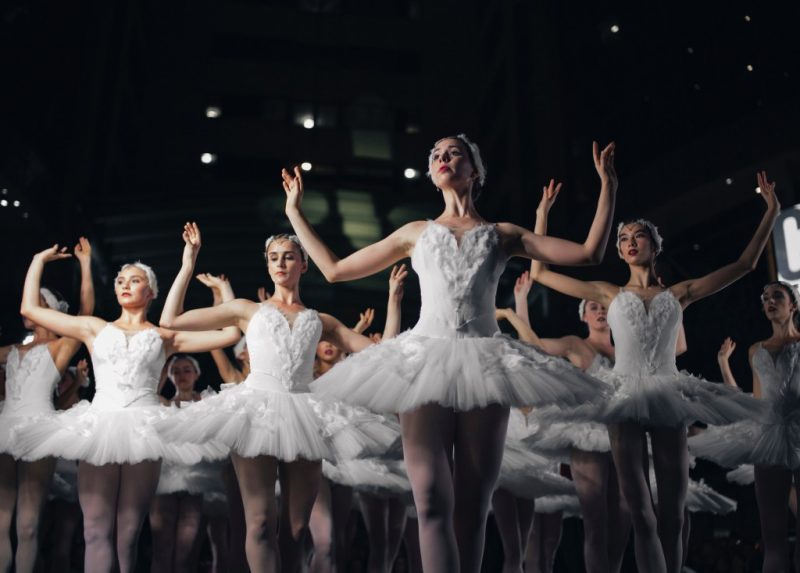 We weren’t allowed to take photos, so this is a stock image

No time to catch a show? At least make time to visit some of the theatres in St Petersburg and soak up the magical atmosphere of these ornate buildings. We visited the Alexandrinksy Theatre to watch the ballet. It’s one of the oldest theatres in the country and home to the oldest theatre company in Russia. There’s a small museum inside and tours can be arranged on request.

There’s also the historic Mariinsky Theatre, which is where many famous ballets and operas were premiered. It’s a gorgeous building, although you’ll only be able to explore the outside and the lobby unless you have show tickets. 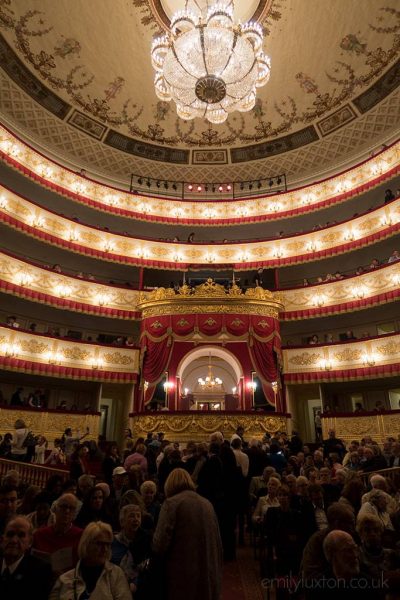 One of my favourite ways to discover any new city… eat! While you’re in St Petersburg, be sure to sample some traditional russian cuisine. And I’m not just talking about vodka! There’s borscht, Russian salad, vareniki (aka pierogi), and – of course – stroganoff. We headed to Biblioteka on the Nevsky Prospect – which is one of the most popular restaurants in the area. The cool, contemporary interior is a great way to escape the chaotic streets below. And the food is fab – with plenty of traditional local dishes to choose from. 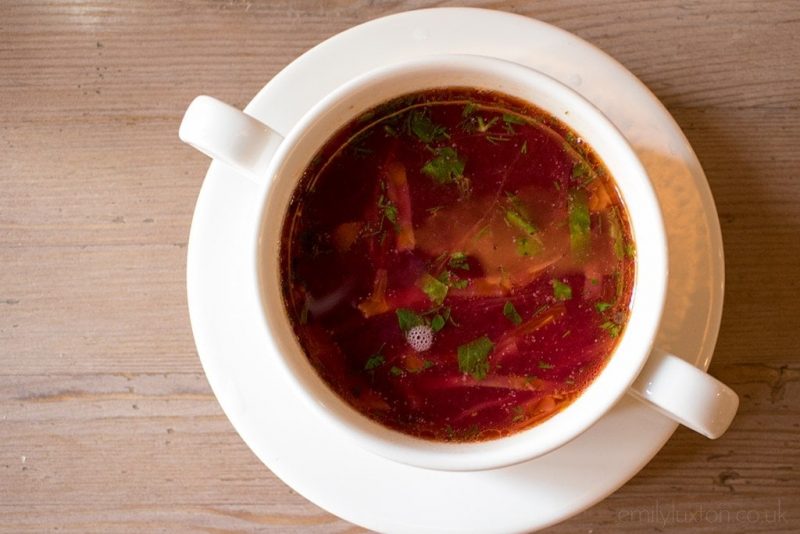 Church of the Saviour of Spilled Blood

It’s all about churches and palaces in St Petersburg! The city’s rich religious history has created many beautiful churches. But if you can only see one, make sure it’s the Church of the Saviour on Spilled Blood. If the name seems unnecessarily extravagant, that’s nothing compared to the church itself!

The outside is exquisite – even half-covered in scaffolding as it was when I visited – with colourful domes, ornate frescos, and glinting gold. But the interior is jaw-droppingly amazing. Every single surface seemed to be covered in intricate, colourful paintings. I’m never normally bothered about churches, but this one was amazing. Definitely worth a quick visit! 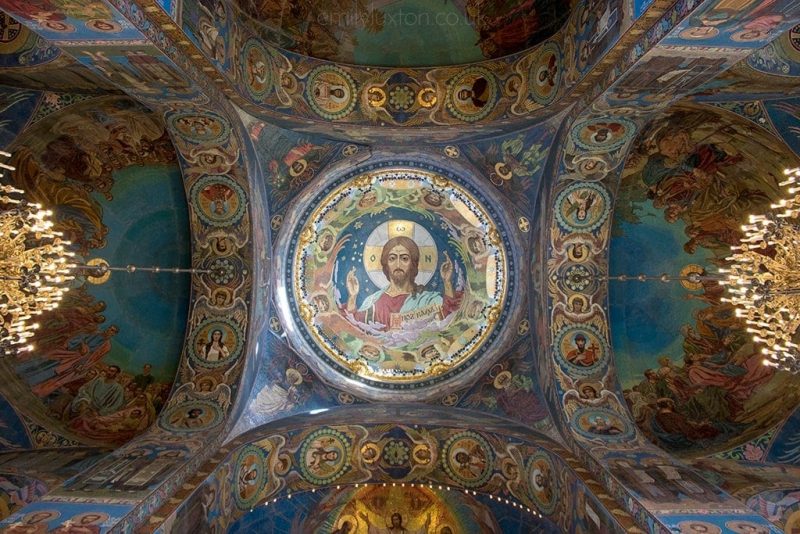 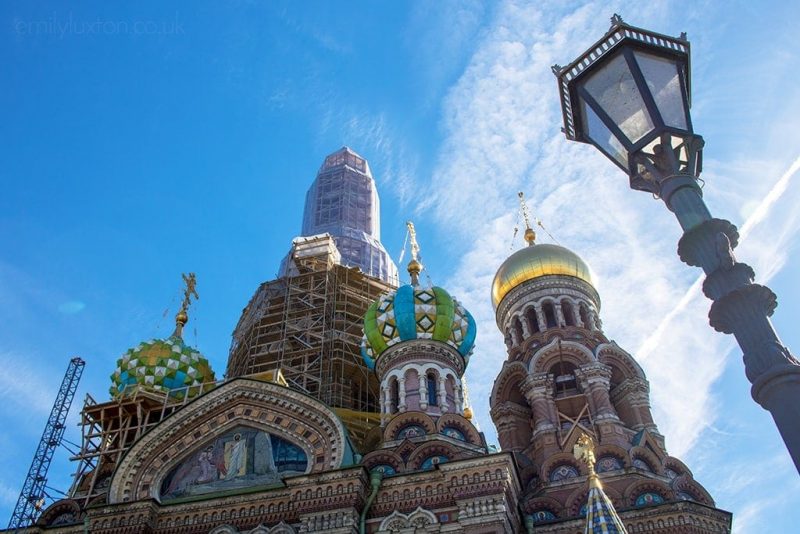 Even if you’re feeling a bit “palace-d out” by now, there’s one final stop to make. The Yusupov Palace is another beautifully decorated home with gold everywhere and some amazing chandeliers. But the real reason to visit is to learn the fascinatingly sombre history of the famous Rasputin. Until now, my entire knowledge of Rasputin came from the animated nineties movie and the Boney M song. Both, apparently, are full of errors.

In truth, Rasputin was a monk said to have healing powers. He healed Emperor Nicholas II’s son Alexei, who was born with hemophilia, and became close to the royal family as a result. Several nobles saw Rasputin’s influence as a threat, and hatched a plot to murder him. Felix Yusupov invited Rasputin to his palace, and served him biscuits and wine filled with cyanide. You can head to the palace basement to learn the dramatic story of Rasputin’s death – which involves him surviving a lot of poison, and several gun shots, before he finally drowned in the river that his not-quite-dead-yet body was thrown into. It’s a great story – if a little dark – and hearing it told in the very basement that the events took place was one of my favourite experiences in St Petersburg. 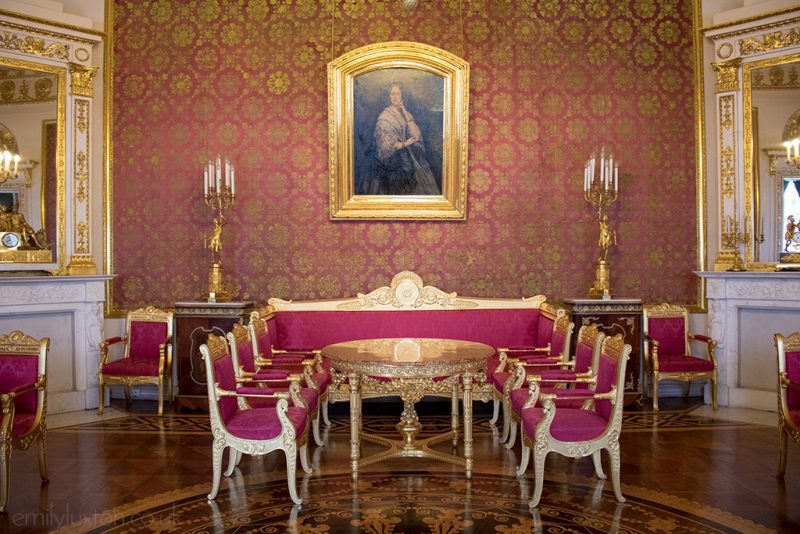 The Peter and Paul Fortress was the original citadel of St Petersburg. Founded by – you’ve guessed it – Peter the Great, the fortress sits on the bank of the Neva River. Visit to learn the full history of the Romanovs – the emperors who filled St Petersburg with glittering palaces and left behind scandalous stories. Many of them are buried in the gold-coloured cathedral, so you can trace the full family history from Peter the Great down to Nicholas II.

TOP TIP: Make sure to visit the fort at noon, to witness the daily firing of the cannon. 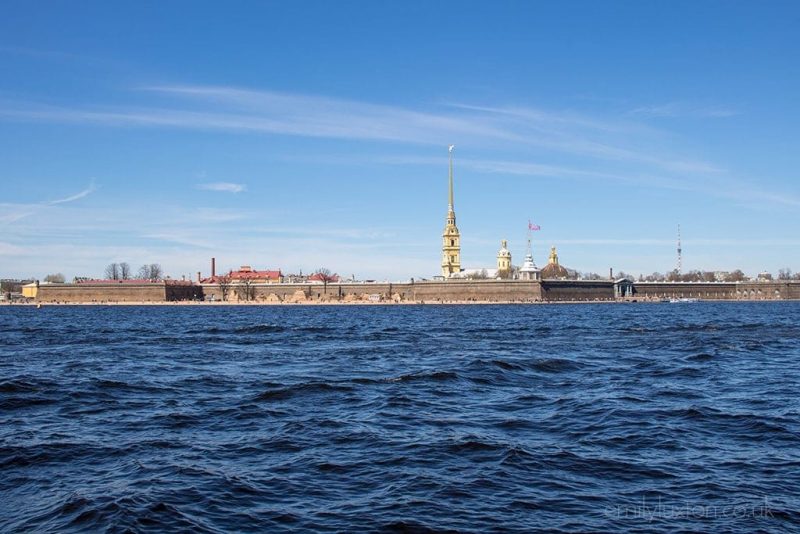 Last but not least is St Isaac’s Cathedral – our final stop in St Petersburg. If you’re thinking “not another church” (like I was) – be prepared for yet another surprise. The interior is gorgeous and definitely worth a visit. But most people come for the views from the dome. St Petersburg once had a rule that no building could be taller than the Winter Palace – so the city’s skyline is quite low. Which means the views from the colonnade around the 100m high dome are pretty impressive. 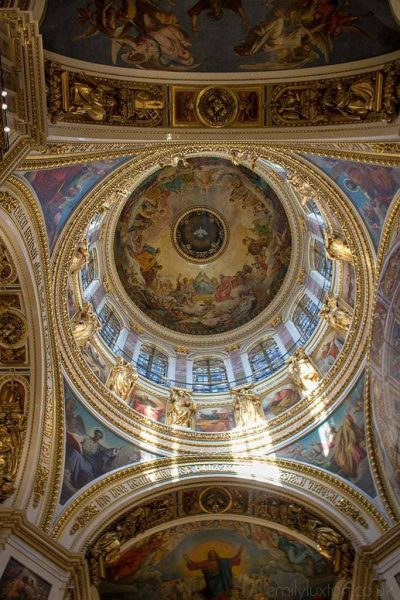 My trip was kindly supported by Princess Cruises in collaboration with Traverse Events. As always, all words and opinions in the post are my own and unbiased.

Have you been to St Petersburg, or anywhere else in Russia? Share your top tips in the comments below.