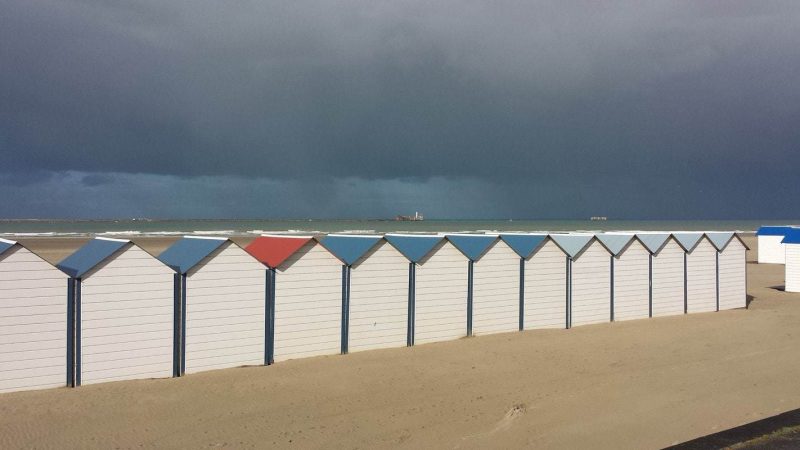 Being primarily a fishing port, Boulogne-Sur-Mer seems strangely unaware that it’s sandy beach and plethora of great seafood restaurants might be attractive to tourists. My guide for the day, Antoine, a passionate local from the small tourist office in town, told me over lunch that the local people simply don’t realise that tourism is a big thing for the town. “They say, ‘what will they do here?‘” he lamented, shaking his head.

At a glance, it’s easy enough to agree with them. This small town on the north coast, with it’s industrial fishing port, isn’t the prettiest place in France. But, it has plenty of charm, not to mention an impressively well preserved history in the Old Town just above the centre. And, more importantly, Boulogne is a seafood paradise, with a daily fish market supplying dozens of fantastic restaurants – making this the perfect place to enjoy La Semaine du Gout, (Taste Week), a culinary festival that took place all across France last week.

My day with Antoine began at the Calvaire des Marins, a small chapel on the cliff dedicated to all Boulogne’s sailors lost at sea. 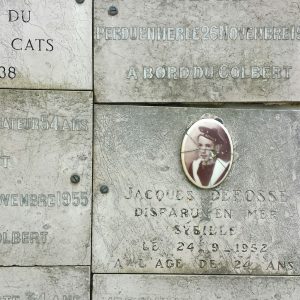 More than 800 names are etched onto stone plaques surrounding a small garden outside the chapel, which looks out across the Channel towards Dover. The town, just outside of Calais, is so close to England that you can see the White Cliffs on a clear day. On my overcast trip last week, the only view I had was of the steely sea dissolving into a murky grey mist, but from atop that windswept little chapel the cold, dark seascape gave a real sense of this town’s historic connection with the sea.

Down at the port, Boulogne’s long tradition as a fishing hub was even more evident. Most of the town’s small fleet of fifty or so fishing boats are still family-run businesses, going out every night and returning in the early hours with a fresh haul to sell at market. Still-flapping plaice gasped on ice in the chill October air, and locals haggled over the price of enormous, barnacle-encrusted crabs. The market was small, and starting to close up as we arrived just before midday, but it’s apparently much cheaper than the supermarkets and clearly the best place in town to pick up incredibly fresh fish – and support the local industry. 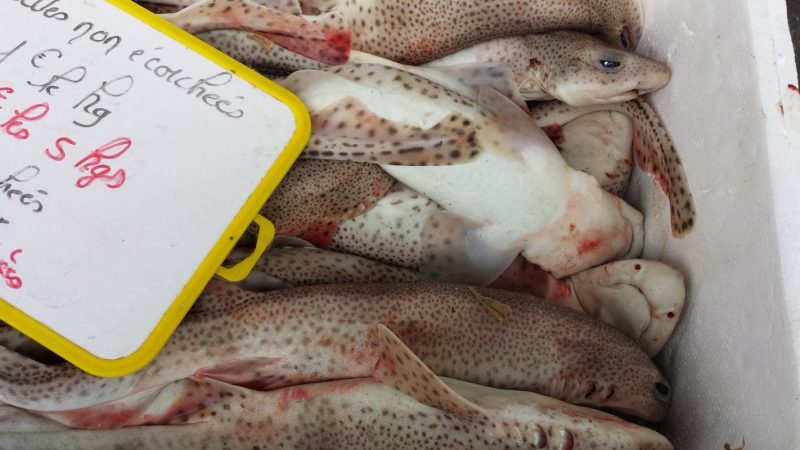 In the pretty new restaurant Nord Oué – a play on words which, I’m told,  makes sense in French – the town’s link with the sea is the chief selling point. The traditional décor, 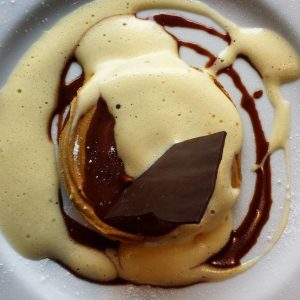 with blue-and-white-checked tablecloths and nautical trimmings, was sweet but not too cheesy, and the menu was crammed with local seafood and seasonal ingredients. Because it was Taste Week, the restaurant had a special set menu running, showcasing some of their best and most creative dishes. Poached egg with smoked salmon and haddock cream to start, followed by a huge fillet of fresh cod, crusted in mustard and breadcrumbs, which was served with seasonal vegetables including the bitter local veg endives. The seafood was incredible, but the mysterious dessert of chicory parfait with a beer sabayon really stole the show; the bizarre flavours of honeycomb and burnt sugar creating a surprisingly yummy flavour.

Up in the Old Town, the bitter autumn weather slapped me awake after such a sleepy lunch of good food and great French wine. The white, starched sky and chilly wind meant I didn’t have to share the cobbled streets with many other tourists, but it was also perfect sightseeing weather; not too cold, hot, or crowded. Boulogne’s Old Town, also called the Fortified Town thanks to it’s 9m thick stone walls, is predominately medieval, but it’s roots date back to a walled Roman castrum established in the early second century with a view to invading England. The vast stone walls, 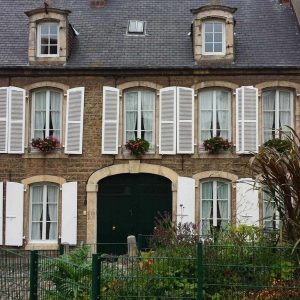 still intact all the way around, were built on top of the Roman walls, retaining the rectangular shape of that original camp. Caesar wasn’t the only one who came to Boulogne to prepare an attack on England, either; Napoleon also established a camp here and the castle in the Eastern corner of the Old Town’s walls, where Antoine and I began, was used for a time as barracks for his soldiers. An historic building that has lived dozens of lives, home to soldiers, prisoners, and the count of Boulogne over the centuries, the castle is now a museum, showcasing not only the town’s rich history and local art, but also collections from around the world. Egyptologist Auguste Marriette-Pacha, who created the museum of Cairo, was a Boulogne local, and he brought home some fascinating treasures, including a spectacularly preserved mummy, which now reside in the castle museum, alongside the largest collection of Ancient Greek vases in the world, and a collection of Alaskan artefacts sourced by explorer Alphonse Pinart, another local talent. 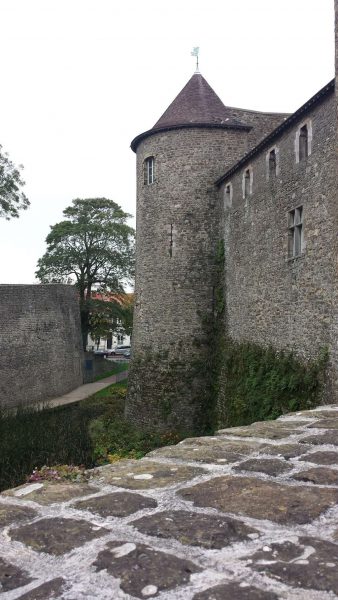 The medieval and 19th century buildings of the Old Town, shivering in the October air, weren’t so winding as other medieval town centres. Instead, they felt claustrophobic and a little topsy-turvy, squeezed into the relatively small area within the immense fortifications. So, the arduous climb up the narrow, spiral staircase of the Belfry tower seemed well worth it as I emerged onto an incredible – and usually off-limits – view of the town from high above. My trip up the Belfry was a travel blogger exclusive, offering a dazzling view of the neatly rectangular Old Town and, beyond it, the rest of Boulogne, down to the port and the Channel behind it. Behind us stood the dome of the Notre Dame basilica, Boulogne’s biggest historic attraction, towering magnificently over the red tile roofs.

Built between 1827-1866 on the ruins of a medieval cathedral – and, before that, a Roman chapel – the Basilica of Notre Dame del Mer is named for the local legend that made Boulogne a place of pilgrimage in the middle ages; that a statue of the Virgin was washed ashore in t 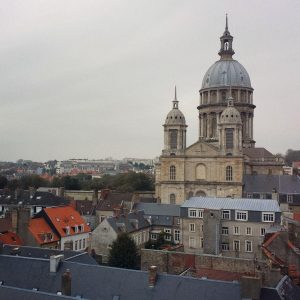 he 7th century. Although destroyed during the French revolution, the statue lives on in hundreds of representations; in gold carvings, life-sized statues, and centuries-old pilgrim’s badges. From the dizzy heights of the dome, ornately mosaicked 101m above the flagstones of the rotunda, to the arched bowels of the crypts below ground, the basilica is seething with history, and pretty unique – thanks largely to the fact that the priest behind it’s construction, Father Haffreinge, had no architectural training. The real highlight of the basilica, though, lay beneath; in the huge network of crypts, which were recently re-opened after years of restoration and investigation. I descended through the centuries with the lovely Marie, an expert guide, and explored the ancient friezes, carved stones, and other artefacts and treasures below the church, all standing as testament to 2,000 years of the towns history.

After underground crypts, stone castle walls, and the claustrophobic belfry tower staircase, we headed to a breezy clifftop just outside of town to get one last glimpse of the sea. Just in time for the sun to begin it’s descent seawards, the grey clouds had finally dispersed, revealing a wintry blue sky above the small town below us. Shining in the weak light of a silvery sunset, Boulogne looked spectacular, perched on the edge of it’s lifeforce; the dazzling, cold, blue sea.

Huge thanks to Boulogne-Sur-Mer tourist board and Nausicaä for hosting me during the trip. Stay tuned for a post all about my Nausicaä visit, soon!