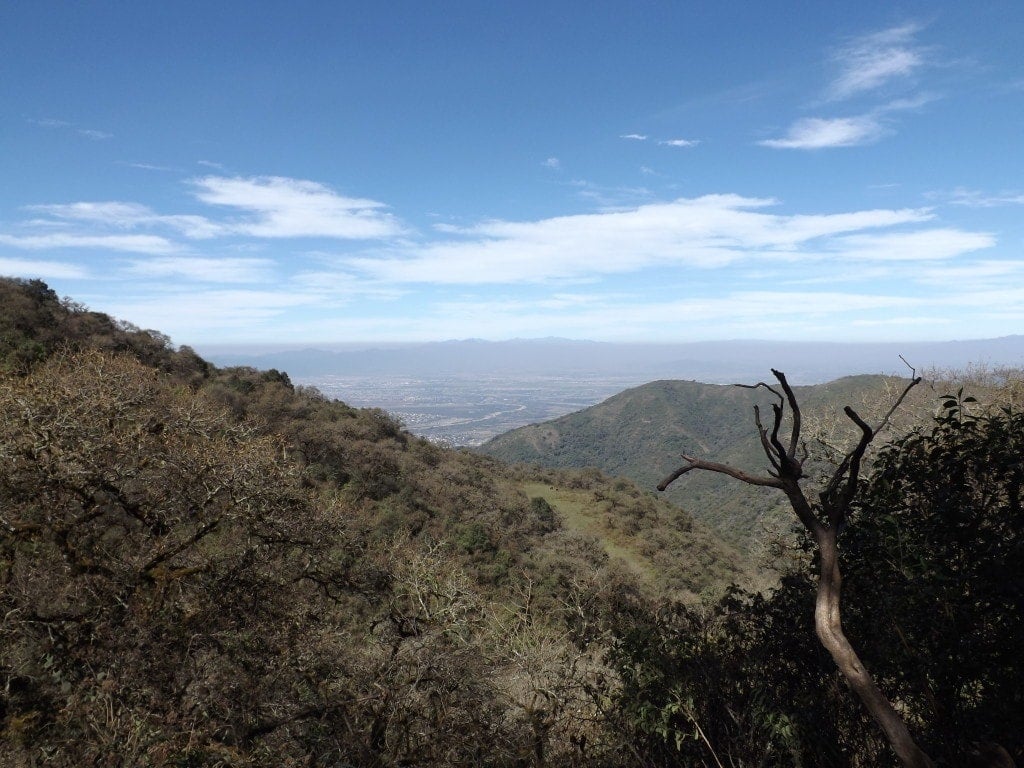 On our third day in Salta, we were keen to get out into the surrounding countryside and explore. Salta is set in one of the more beautiful parts of the country, with tons of great things to see on tours of the area, and we were keen to visit a little bit.

Since it was only down the road, and an easy, cheap bus ride away from Salta, we settled on San Lorenzo. This is a leafy Saltean suburb with a large and picturesque reserve full of forests, rivers and hills. Not realising we were supposed to pay for the reserve and hire a guide, we 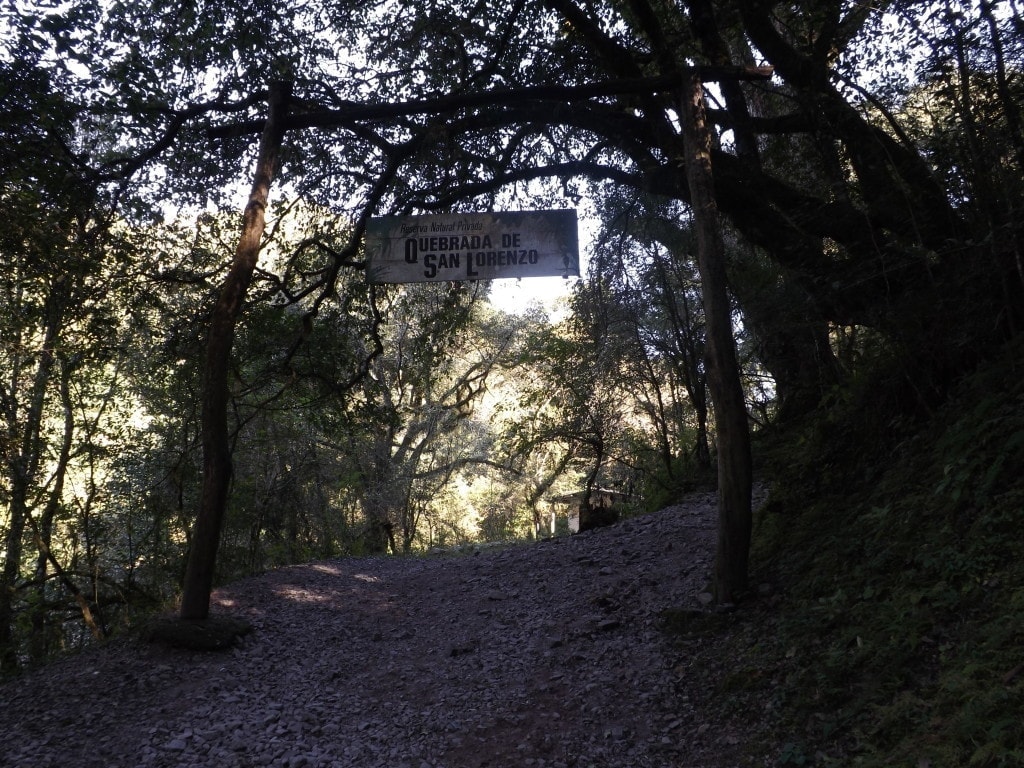 walked straight in, but on a quiet Tuesday there was no one around to stop us. I’ve heard the place gets pretty busy on weekends, but we didn’t see anyone else once we’d left the entrance behind, so I’d recommend visiting on a weekday if possible.

We were testing out a new app I’d found, Wikiloc, which lets you download GPS routes for various hikes all around the world. The route we’d chosen, a 15km hike around the Quebrada de San Lorenzo and up into the hills beyond, was a lot longer than the standard two hour hike through the gorge, went off-road quite a lot, and was pretty hard t 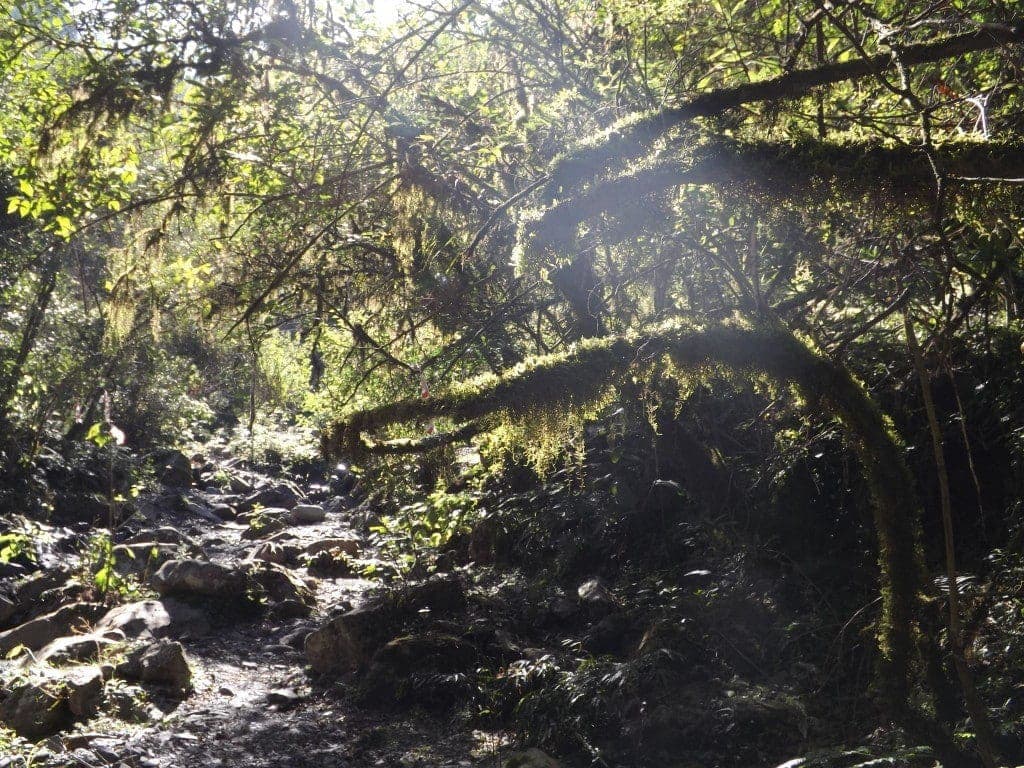 o follow even with a GPS map on my phone showing us the way. One of the problems was that, since I can’t connect to the net on my phone overseas, there was no physical map and we were just following a line! Also, in places the path was pretty overgrown and sometimes vanished – so to be honest I wouldn’t recommend the route unless you’re a confident hiker.

It was still a fantastic walk, in spite of the few technological glitches, and the scenery was spectacular. We started off on a rocky path following the river, through a thick forest with mos 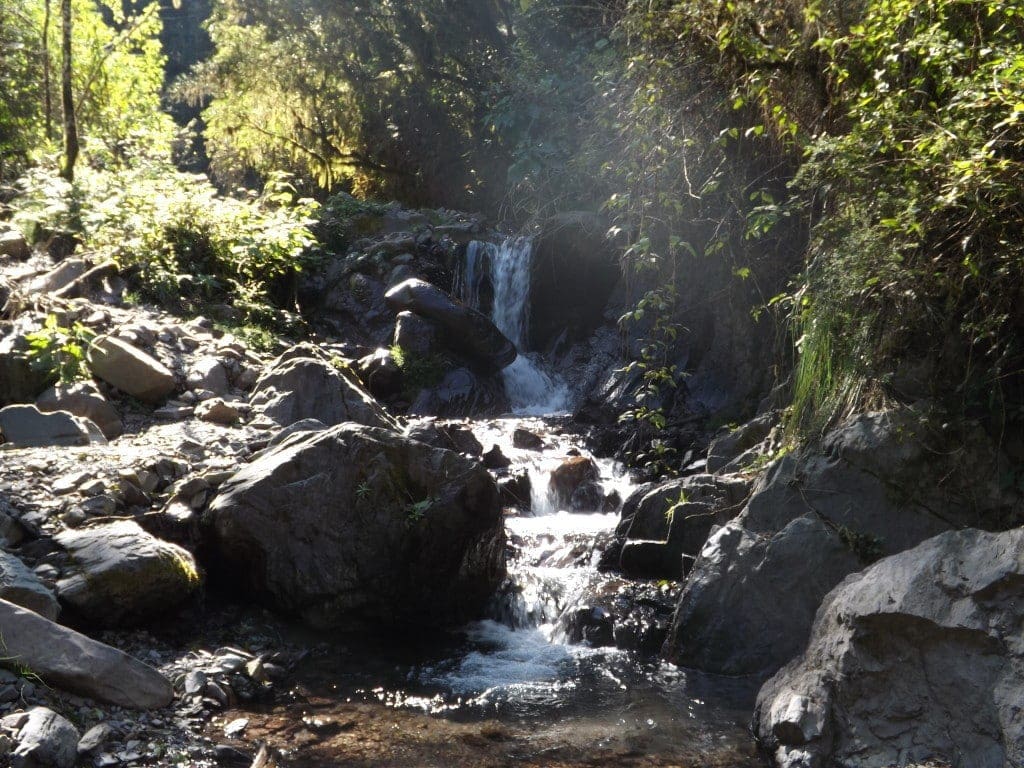 sy tree trunks, ferns, fungi, and damp green leaves catching the sunlight. It may be winter in South America right now, but the weather was gorgeous, like a day at the end of summer in England, with warm, bright sunshine and just a hint of a chill in the shadows.

The small, fast stream gurgling through the riverbed was dotted with miniature waterfalls and was so pretty, but we soon left it behind and headed up a steeply winding uphill path. Behind us, the views across the gorge, smothered in green forest, and to Salta beyond 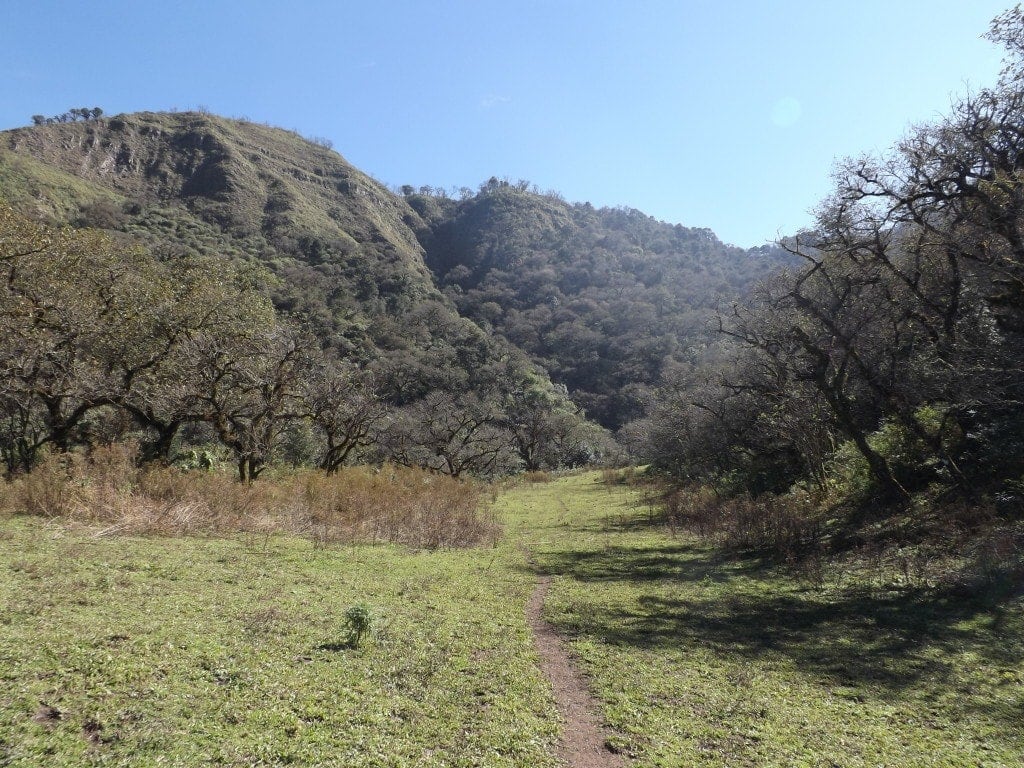 were fantastic. We headed into the thick forest, smelling of damp earth and bark, following a pack of wild horses as they sauntered uphill, until we came to a huge clearing of rich grass under a clean sheet of blue sky. Sitting down for lunch, we spotted a condor swooping low over the landscape in search of carrion, but besides him and the horses we had the place to ourselves. It was gorgeous!

From there, the rest of the uphill hike wasn’t too long. The steep path was pretty demanding, but when we finally reached the top and stepped out of the tangled branches of the fo 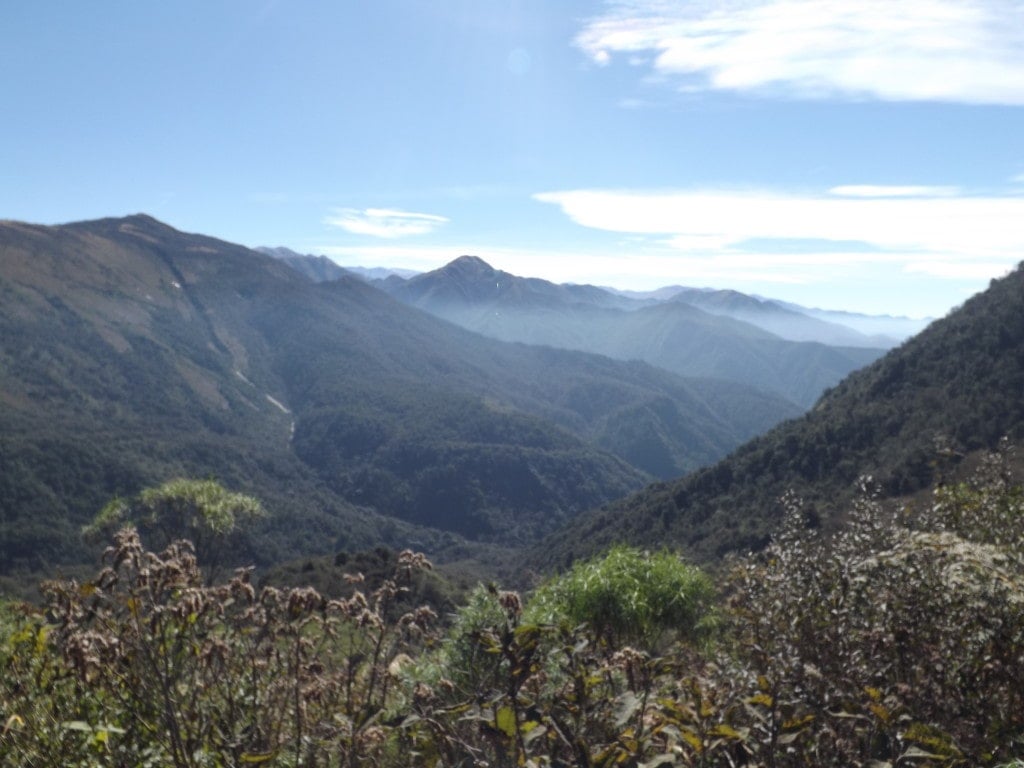 rest, the reward was a staggering view of a deep, green valley carved between rolling hills that vanished into the blue, misty distance. We flopped onto the grass in the blistering sunshine and could have spent the rest of the day just staring at that view, if we didn’t have to get back to Salta for our night bus.

Surprisingly, the descent was the trickiest part. Following the GPS route instead of the path led us into waist-deep bushes with just a hint of a track between them, probably left by animals. We followed the clumsy, frequently disappearing trail down the side of the steep 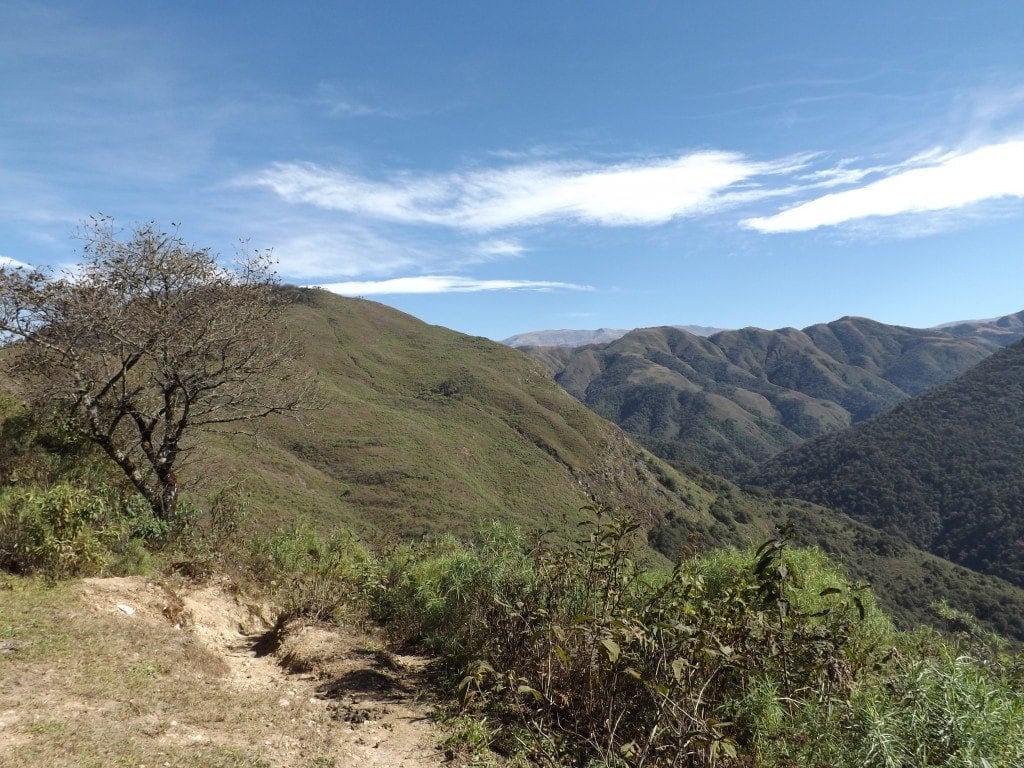 hill and into wiry forest, until we found ourselves almost completely lost. After an hour of circling the hillside, getting caught on brambles and snorted out by some wandering cows, we finally made it back to the path and followed this downhill in a steep, zig-zagging pattern than was really hard work on my ankles – much worse than going uphill.

Eventually, though, we made it back down into the gorge and the thick, summery woodland, where we followed the river back to the start of the trail. It was a beautiful walk and we had the entire reserve to ourselves, which was fantastic, so I really recommend a visit to San Lorenzo while you’re in Salta – but just follow the paths!