Home Europe Spain What to Eat in Galicia: A Mega Guide for Foodies

What to Eat in Galicia: A Mega Guide for Foodies 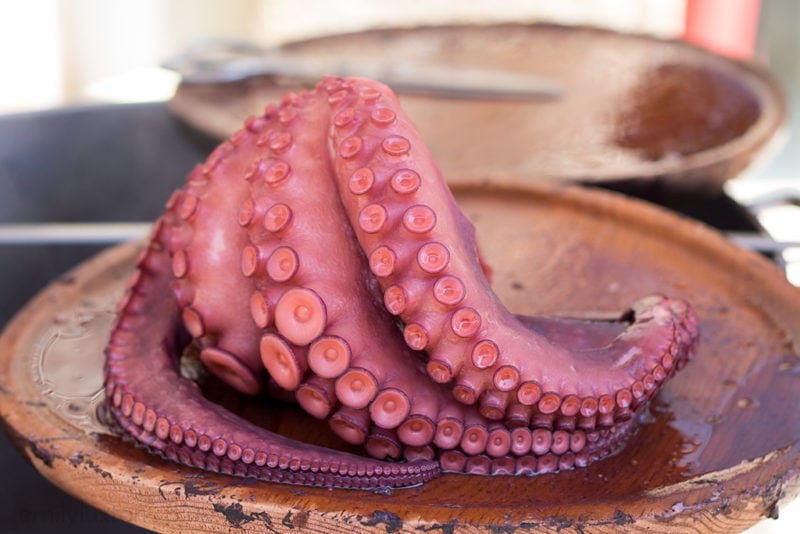 This post initially started life as a lighthearted “top ten” style list of what to eat in Galicia. Somehow, though, it’s escalated into a full-scale guide to Galician gastronomy. Any longer and I’d have to publish it as an eBook!

When I explored this region of Northern Spain, I really fell in love with Galician food. From simple pulpo a la feira to the numerous Galician desserts, there was just so much to try. With the help of several locals, I’ve created a very long list of the must-try dishes. This is my guide to the cuisine of Galicia – enjoy!

Before you read on, watch this ad to donate some money to charity (and help my blog out). More info here.

The region of Galicia in northwestern Spain is famed for producing some of the best food and ingredients in the entire country. There’s almost 1,500km of coastline, so seafood plays a big role in the cuisine of Galicia. There’s also more rainfall that the south of the country, so the interior of the region is incredibly fertile. This means lots of farmland, as well as plenty of room for raising dairy cows and planting vineyards. 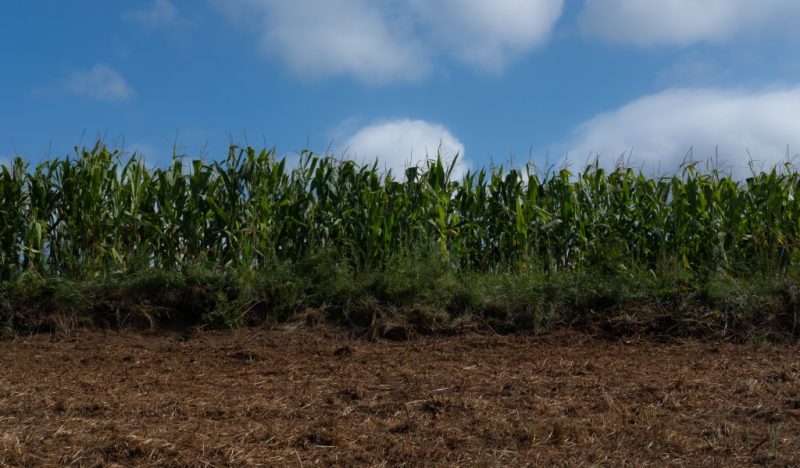 Food tends to be simple and hearty. Potatoes, wheat, dairy, and meat products all feature prominently, and many of the most traditional meals have a very rustic feel. It’s the Galician desserts that tend to be more creative – but that’s still to come. First, here are some of the more traditional Galician dishes to try…

Lacón con grelos (pork shoulder with greens) is the perfect representative of Galician gastronomy. This hearty meal consists of salted pork shoulder or leg, chorizo, and vegetables. Grelos are turnip tops. These are a very common vegetable in Galicia, and have a distinctive, bitter taste. 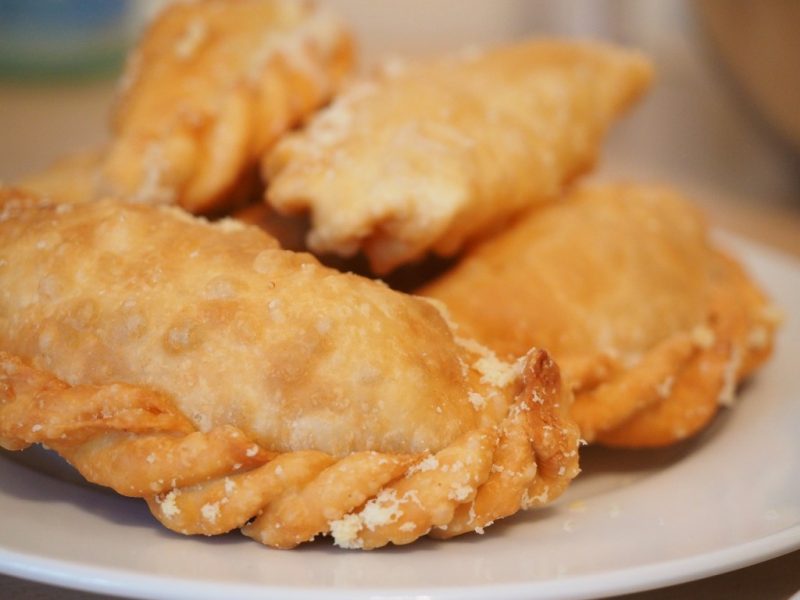 Although they are more commonly associated with Latin American cuisine, empanadas actually originated in Galicia and Portugal. Typically, a Galician empanada will be bigger and flatter than the ones you find in Argentina. These filling meat pies come with a variety of fillings, but the most popular is probably empanada de atún – tuna pie).

Simply called caldo in Galicia, Caldo Gallego (Galician broth) is a hearty soup dish that’s packed with vegetables. Potatoes are boiled with fat white beans, as well as greens including grelos, cabbage, or collard greens. The key ingredient is unto, a kind of lard made from dried aged pork belly. Sometimes chorizo, ham or other cuts of pork are added too. 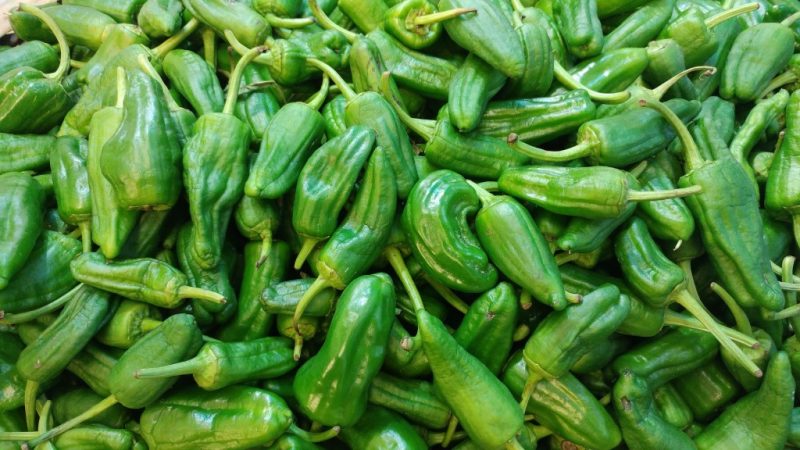 These small green peppers can be found all over Spain, but they’re actually from Herbón in the Galician province of Padrón. They arrived to the region with settlers from Mexico, but now they are so important to the region that there’s an annual festival for them. Padrón peppers are usually fried over a high heat until the skins blister and are slightly blackened. Eating plateful of these little green chillies has an element of Russian Roulette to it. While most of them are mild, around 10% are super-spicy, and there’s no way to tell without tasting them.

Where to buy: Pick up a jar of spicy pepper marmalade from A Pementeira’s stall in Santiago market-  I love it.

Dairy cows are much more common northern Spain than in the south. Which means Galicia produces some great cheeses. Most famous and widespread is Tetilla, a mild yellow cheese known for it’s buttery taste. The name comes from a slang term for breast, because of the cheese’s shape. Also look out for Arzúa Ulloa, a soft, pale cheese which is similar in taste to tetilla, and San Simón da Costa which is firmer and smokier.

Being a coastal region, Galicia is big on seafood. Very big! It’s plentiful, it’s cheap, and it’s considered to be some of the best in Spain. Most traditional dishes are prepared very simply, with just a few ingredients and spices. Often, the fish or shellfish is simply boiled or steamed and served with lemon. The emphasis is always on the seafood itself. 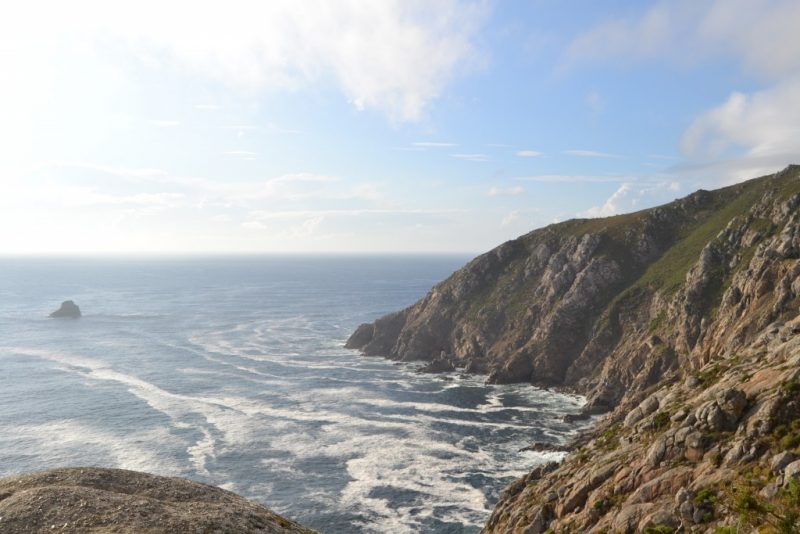 This section is dedicated to the most unmissable Galician seafood dishes. But, bear in mind that there are loads more to try besides these. So be adventurous and explore the markets and menus around the region to discover some amazing dishes. 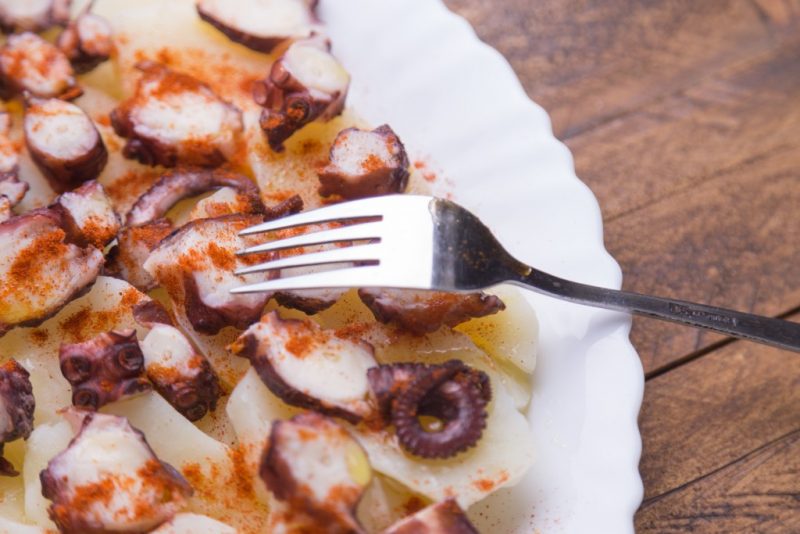 Common octopus thrive in the colder waters of Northern Spain’s coast, so they’re one of the most common seafoods here. Galicia have a unique way of preparing octopus, which is probably one of the most famous traditional Galician foods.

The octopus is boiled in a copper pot, chopped into medallions, and served with olive oil, paprika, and salt. This iconic Galician dish is known as pulpo a la feira, or polbo á feira in Galician. The name translates to “fair style octopus”. This is because the dish is commonly served at fairs and festivals, and always on a wooden plate. It’s such an iconic dish that it’s often called pulpo a la gallega, or Galician octopus.

Where to buy: Grab a wooden plateful of pulpo a la feira at the market in Santiago. An authentic Spanish take-away lunch! Hake with Onions and Potatoes

Perhaps the most popular fish in Northern Spain, hake (or merluza in Spanish) can be found all over Galicia. This is a lean, white fish with a low fat content – which is handy because it’s usually served up in huge portions. The most traditional dish is merluza a la gallega. This is simlpy hake is boiled with potatoes, served in a sauce made from garlic and pepper. It’s simple, but very tasty.

Also known as bogavante, Galician lobster is blueish in colour (when it’s alive) and is extremely tender and meaty. Look for bogavante con arroz for one of the most traditional Galician seafood dishes. It’s pricey by Galician standards, but very worth it!

Also prolific in Northern Spain are scallops (vieiras). They are so common in this region, that their distinctive shells are used as the symbol of the Camino de Santiago. In Galicia scallops tend to be served one of two ways. You can have them steamed, plain, and served in a half-shell with a little lemon. Or you can try vieiras gratinadas, which are served with a lightly spiced breadcrumb topping. 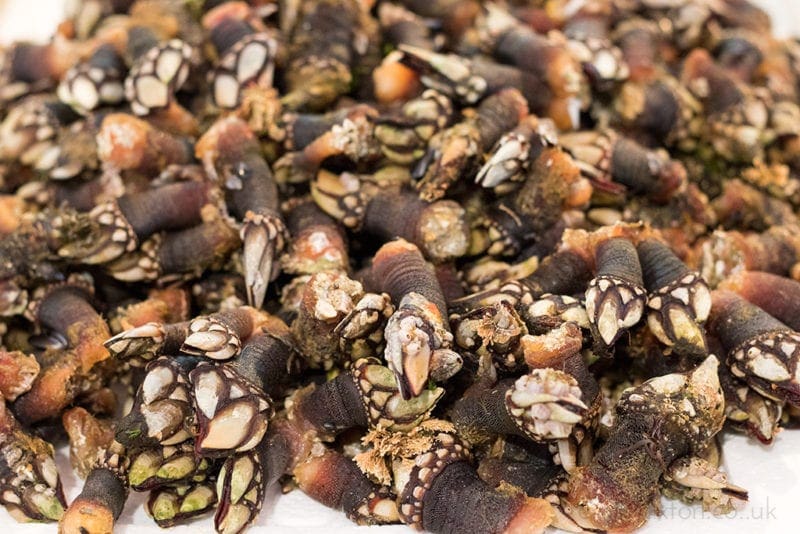 These unappetising looking critters are apparently very popular in Galicia. Percebes, or goose-neck barnacles, are prepared in a simple way. They are boiled with salt and lorel leaf for around thirty minutes.

When I asked if they were nice, my guide Patricia confessed: “I don’t like them!”. But local girl Ana told me she absolutely loves them, as do most Galicians. Give them a whirl if you really want to eat like a local in Galicia.

A delicacy worldwide, oysters in Galicia can be surprisingly cheap. Find ostras in markets to get the best prices. And wash them down with a glass of the local white wine, Albariño!

For the best oysters in Galicia, head to Vigo. Oyster Street in the Mercado a Pedra (stone market) is lined with vendors.

If you want to try lots of Galician seafood at once, order a mariscada. These are huge seafood platters! They tend to be a little pricey, but they’re a great way to experience a lot of things in one go.

Dessert in Galicia is all about almonds. Pilgrims following the Camino de Santiago brought the nuts with them centuries ago, and they’ve become a regional staple. Most famous of course is the Tarta de Santiago, but there are plenty of others besides. Many towns and cities have a signature dessert which is only found there, so ask around as you travel and see if you can uncover some secrets. Here are a few traditional desserts to try in Galicia… 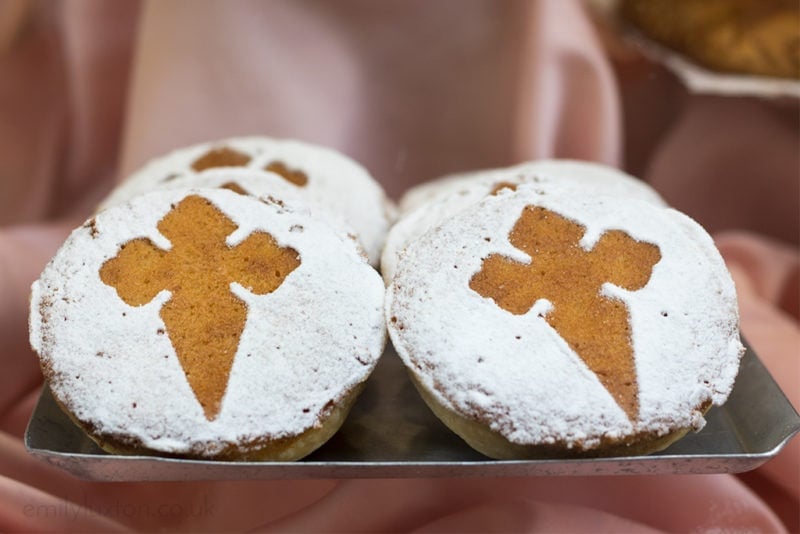 Dating from the middle ages, Santiago Cake can be found in bakeries all over the Galician capital. Because of this, the cake has become a symbol of the Camino de Santiago.  Today it is frequently eaten by pilgrims upon arrival in Santiago de Compostela at the end of their journey.

The recipe is simple and very sweet. Ground almonds, combined with egg and sugar, are baked into a tart about an inch deep. The cake is decorated with the cross of St James by sprinkling powdered sugar over a stencil. Be careful where you buy yours, though. Many of the cheaper ones are made using more flour than ground almonds, so the taste isn’t as good.

Where to Buy: According to one local I asked, the best Santiago Cake can be found at Mercedes Mora. Alternatively, you can pick one up from the Benedictine nuns at nearby San Pelayo de Antealtares monastery, not far from the cathedral.

There are three traditional Galician desserts in Santiago; all of them featuring almond. Caprichos are small biscuits made from toasted almonds, eggs, and sugar. Like Santiago Cake, they’re a traditional snack for pilgrims reaching the end of the Camino de Santiago. Caiprichos can be found at bakeries all over the city; head to Rúa do Franco or Rúa Nova to find one.

The third traditional dessert in Santiago is pedras, meaning stones, which are simply chocolate covered almonds. Tenda da Caldeirería, a boutique supermarket specialising in local goods, is a great place to buy them. 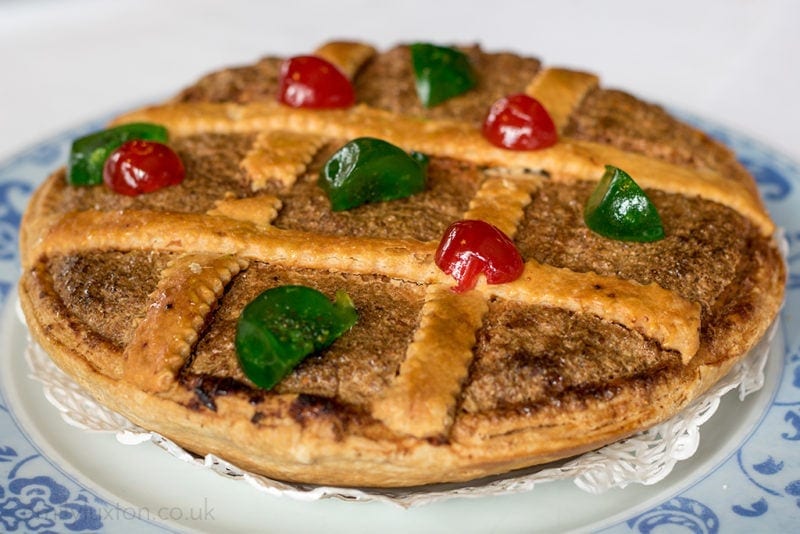 A sweet puff pastry pie, Mondoñedo cake is only found in the town of  Mondoñedo. The pie is stuffed with two layers; ground almonds on top of a stuffing made from candied spaghetti squash or pumpkin.

Where to Buy: I can personally recommend the Mondoñedo cake at Restaurante Montero.

Spain may be best known for it’s reds, but Galicias most famous wine is a white. Albariño is made with the indigenous Albariño grape, grown in the Rias Baixas, a series of four Atlantic inlets south of Santiago de Compostela. The wine is fruity and incredibly light and accompanies the seafood tremendously. Check out this great guide to the region’s vineyards for more details. One of my favourite discoveries in Galicia was Nordés Gin. A relatively new gin, Nordés is made from an Albariño-grape-based spirit, making this a very Galician drink. Botanicals include lemon peel and hibiscus, and the resulting flavour is sweet and floral. It’s quite a light, summery gin that would be perfect for cocktails.

Across Northern Spain, the local aguardiente (fire-water) is a pomace brandy known as orujo. It’s similar to grappa and probably originated in Cantabria, but Galician orujo tends to be better known. Many Galician families have their own secret recipe, and there are also several commercial producers in the region.

Galicia has strong celtic roots which are still visible in many of the regions customs and festivals. A good example is the Galician drink of queimada, which is a fiery punch. Orujo is mixed with coffee beans, cinnamon, sugar, and lemon zest whilst a spell is recited to ward off evil spirits, then the drink is set on fire. This traditional ritual is considered a vital part of Galician identity.

So, that concludes my guide to Galician cuisine. I’ve really just focused on the most traditional Galician food and drinks, as well as  some of the tips I picked up along the way. If I’ve missed anything, or you have your own great tip, scroll down to leave a comment!

My visit to Galicia was as part of a press trip organised by The Travel Mob on behalf of El Camino Santiago and Turismo Galicia for the #InGreenSpain and #VisitSpain campaigns. As always, all views and opinions (except quotes) are entirely my own and without bias.