Home Europe 15 of the Best Things to do in Vilnius

15 of the Best Things to do in Vilnius 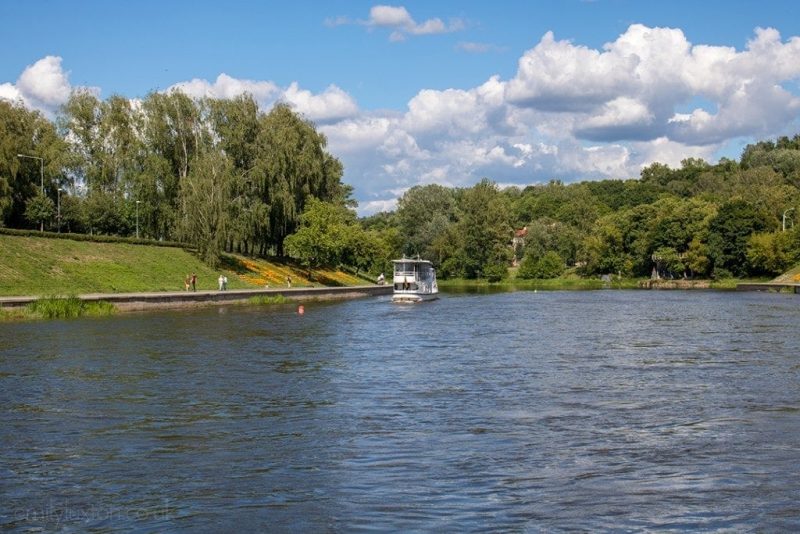 Vilnius is the perfect European minibreak. It’s quiet without being dull, lively without being crowded, and it’s not yet overrun with tourists. There’s a beautiful old town, wide green spaces, lots of fascinating history, great food, and plenty of trendy bars. Plus Vilnius has a thriving street art scene and loads of cool coffee shops to explore.

Convinced? This is my round-up of all the best things to do in Vilnius on a short break. During my two-day visit I managed to do all these things (with the exception of Gediminas Tower, which was closed). So this is the perfect basis for your Vilnius weekend itinerary. Enjoy!

I was in Vilnius on assignment with Booking.com and Lonely Planet. As always, all words and opinions are my own and unbiased.

Where to Stay in Vilnius

My recommendation is to stay right in the heart of the Old Town, so that you’re within easy walking distance of all the top attractions. I stayed at the Shakespeare Boutique Hotel and it was perfect. The hotel is set within a 17th century palace, and the building felt full of history. 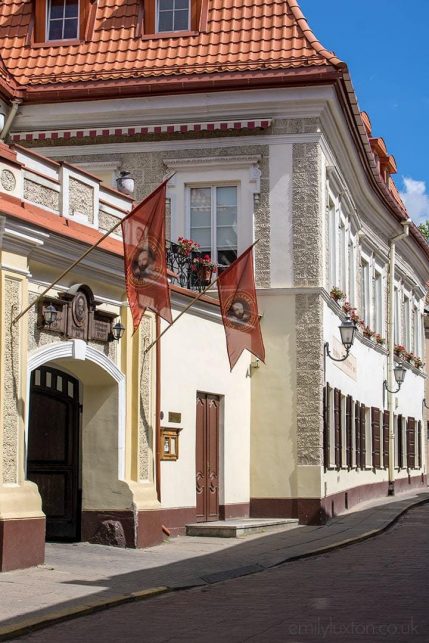 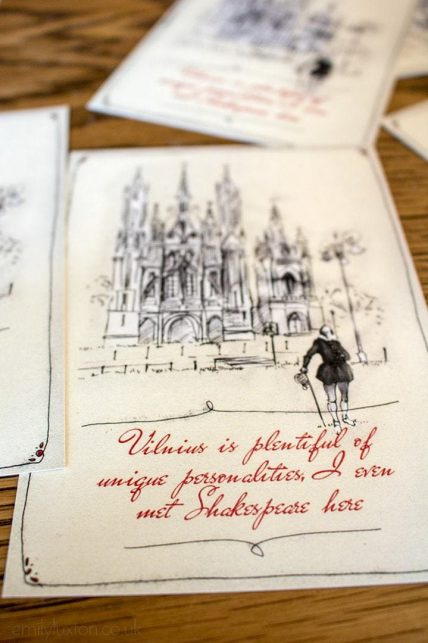 Because of the literary connections, the whole hotel is filled with books and references to literary figures. Better still, each of the rooms is uniquely decorated. Mine was the Coach House room, so it was filled with paintings of horses and coaches, and the bookshelf was stuffed with books relating to horses. It was so cute!

Top Things to do in Vilnius

Vilnius is a city best viewed from above. Although it’s relatively flat and free of skyscrapers, the city centre is dotted with towers that provide amazing views of the red-tiled rooftops of the old town. Head to the bell tower of St John’s Church at Vilnius University (€2.50) for one of the best views of Vilnius. There’s a rickety wooden staircase, or a small lift if you don’t fancy the climb. Alternatively, the bell tower at Vilnius Cathedral (€4.50) offers a beautiful panorama with close-up views of the cathedral. 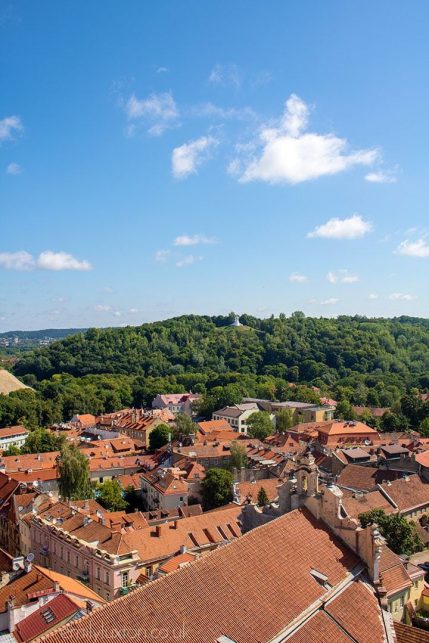 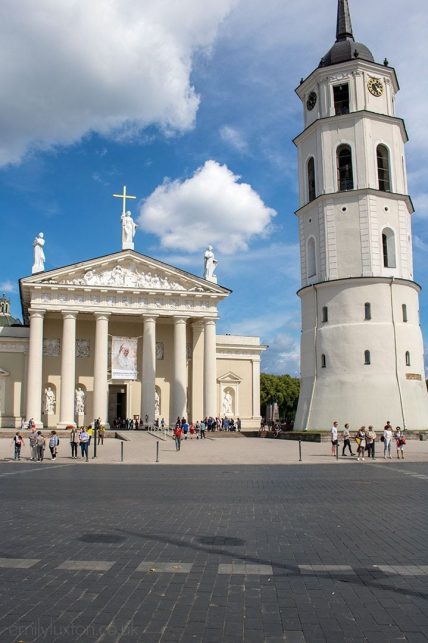 Wander Through the Old Town

One of the best things to do in Vilnius is to simply wander the winding, cobbled streets of the old town. A UNESCO World Heritage Site filled with pastel coloured buildings and pretty churches, this is one of the largest surviving medieval towns in Northern Europe. 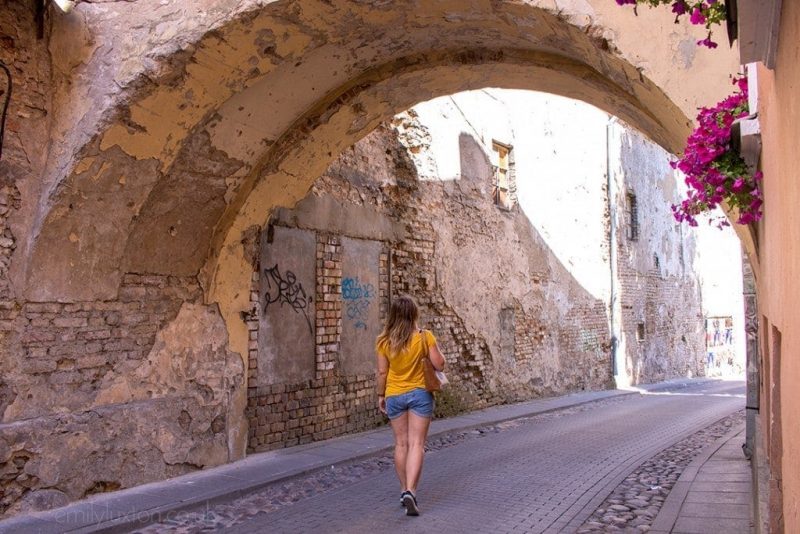 Once the city was encircled by a high wall with nine protected entrances. Today, the only surviving one is the Gates of Dawn. Don’t miss the chance to pass beneath the arch and enter Vilnius as people would have done hundreds of years ago.

RELATED POST: The perfect route for a Sunday Stroll in Vilnius

Tour the Independent Republic of Užupis

On April Fools Day in 1997, a community of artists and dreamers declared the neighbourhood of Užupis an independent republic. Self-declared and largely unrecognised, this small district within the city of Vilnius continues to maintain its independence. The republic even has its own constitution, which has been translated into several languages and displayed proudly in the centre of the neighbourhood. The 39 articles of the constitution declare the rights of Užupis’ canine, feline, and human inhabitants. My favourite? Number 13 – “a cat is not obliged to love its owner, but must help in time of need”. 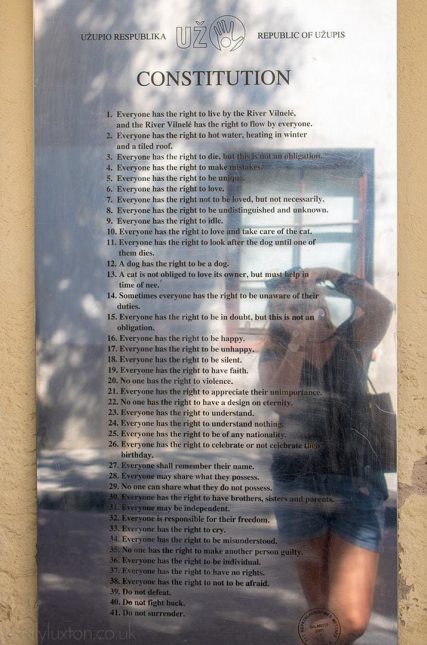 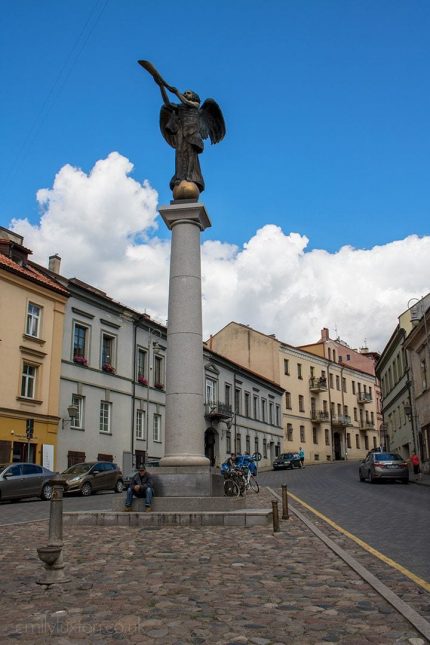 The Angel of Uzupis

There’s plenty to see around Užupis, a bohemian district filled with art galleries, coffee shops, and street art. As you wander, you’ll spot plenty of street art, and maybe even a pop-up outdoor exhibition or two. I liked Tibet Square, a leafy park adorned with prayer flags and overlooking the pretty Vilnia river.

Speaking of street art… Vilnius has a lot of it! In the city centre you’ll find works by some big names, like Os Gemeos, Millo, and others. Many visitors love the controversial Trump/Putin mural. It used to show the two presidents engaged in a cheeky snog, but it’s since been revamped. Now it shows Trump blowing smoke into Putin’s open mouth. Kinky. 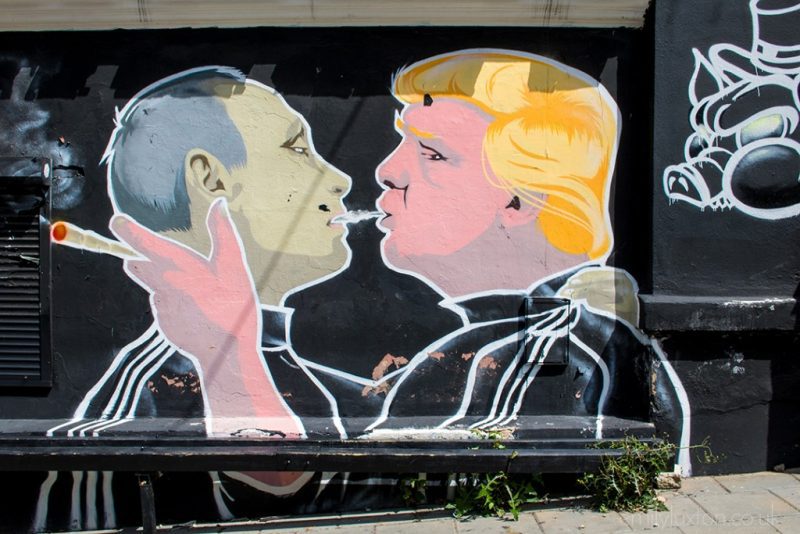 If you’re interested in seeing all the street art in Vilnius, the tourist board have a free downloadable guide with a map. What’s missing from it, though, is the legal art wall found on Olimpiečių Street, nicknamed Graffiti Pier. It’s more tags and scrawls than murals, but worth a look for any graffiti enthusiasts. 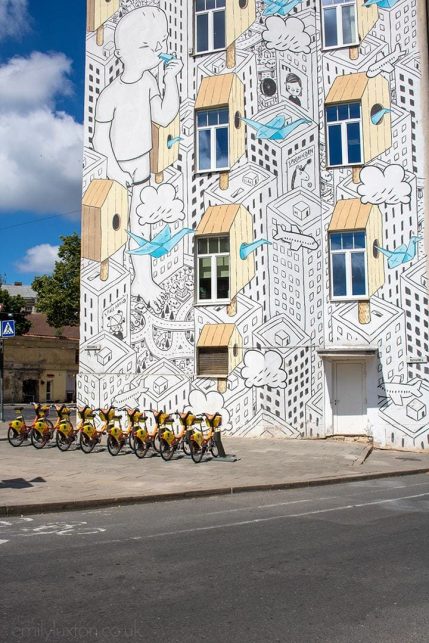 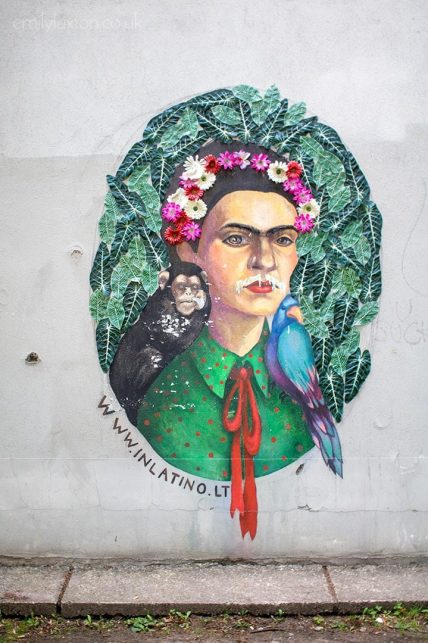 At the heart of the old town, Pilies Street is lined with lovely cafes and restaurants. This is the perfect place to sit outside with a drink and watch the world go by. The street has a lovely vibe and plenty of great foodie options. I liked Wine and Smile – a wine shop with a few tables to drink outside. Pilies Street often has buskers and street performers too – so keep your eyes (and ears) open!

Visit the Museum of Genocide Victims

A darker period in Lithuania’s recent history was its occupation by the Soviet Union. It’s certainly not the lightest of subjects, but it’s something that I think it’s important to understand a little more about. A trip to the hard-hitting Museum of Genocide (€4) is a must if you’re interested in Vilnius’ history. 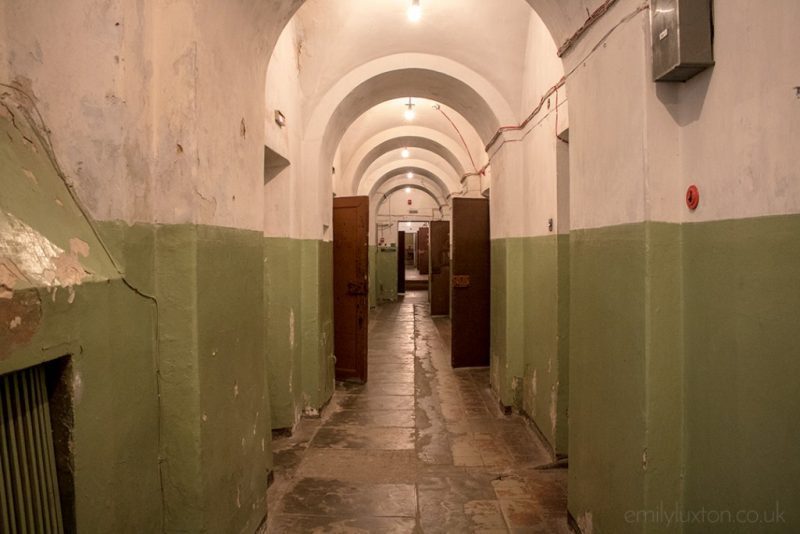 Inside the former KGB building, you can learn all about what life was like under Soviet rule. But the most eye-opening part of the museum is downstairs in the former KGB prison. You can tour the cells, and visit the place where death sentences were once carried out. There are still gunshot marks in the walls of the basement, and artifacts recovered from a nearby mass grave are on display. It’s heavy stuff, but genuinely worth a visit if you want to truly understand what happened.

Make a Wish at the Miracle Tile

For a more hopeful counterpart to the Genocide Museum, head down to the Cathedral Square and seek out the Miracle Tile. The square tile, marked Stebuklas, marks the endpoint of the longest ever human chain. In 1989, around two million people joined hands and formed a chain that stretched from Tallinn, Estonia all the way to the Cathedral Square in Vilnius. The movement was a peaceful protest against Soviet rule and a strong statement which was heard around the world. 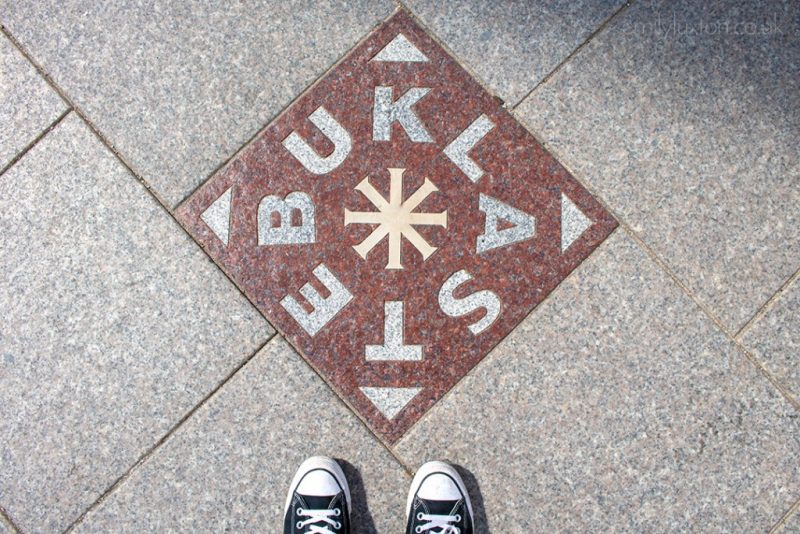 Today, the Miracle Tile is rumoured to grant wishes. You stand on the tile, spin around clockwise three times, jump up in the air and clap once. Then make your wish, and supposedly it will be granted!

Vilnius is a fantastic foodie destination. One of my favourite discoveries was the seasonal weekend street food market, Open Kitchen. It takes place every Friday and Saturday throughout summer at the Tymo market. Think bustling stalls and food trucks offering some of the best modern food in Lithuanian, music, and a few pop-up bars selling local beers and ales. It’s a great insight into the contemporary Lithuanian food scene. 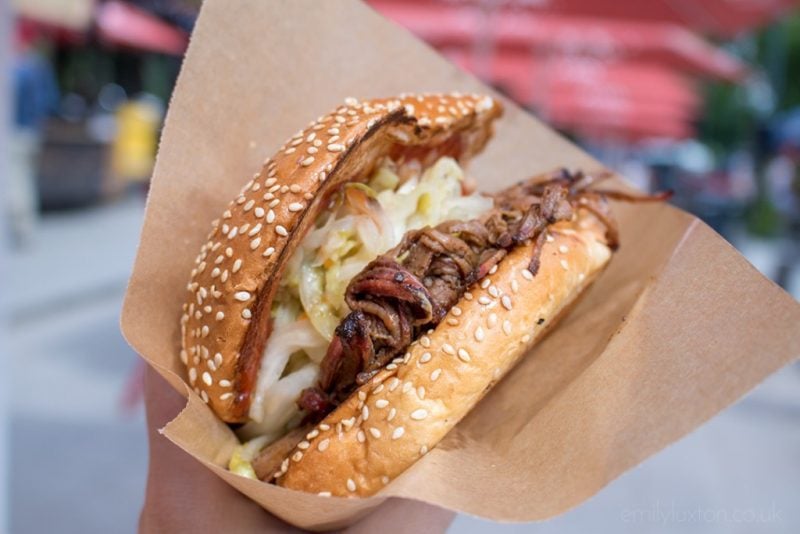 One of the things I loved about Vilnius was how green the city is. At times, it didn’t feel like a city at all – with so many green spaces and parks within easy reach of the city centre. Two rivers cut through the centre, providing ample opportunity for leisurely walks or even watersports. 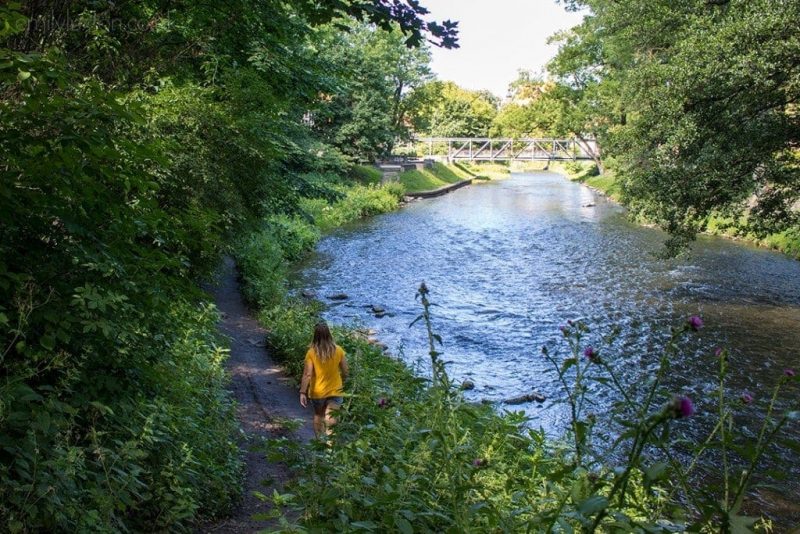 Walking along the Vilnia River

The Neris River is the larger of the two, running right through the city centre. Wide pedestrian and cycle routes run on either side of the river, and you can also kayak along it or take a boat cruise. The smaller Vilnia river runs through the old town, and if you follow it from Gediminas Tower to the Bernardine Cemetary it really feels as though you’re out in the countryside. Shaded by trees and overrun with colourful wildflowers, the path here is a tranquil counterpart to the city centre.

Vilnius may be full of hipster coffee shops and trendy restaurants, but the city hasn’t forgotten its roots. Traditional food is available all over, and it’s something you really need to discover. There’s no shortage of great restaurants. I liked the one at Hotel Shakespeare, and Lokys Restaurant also comes highly recommended. Check out this list of traditional Lithuanian dishes to see what you need to try! 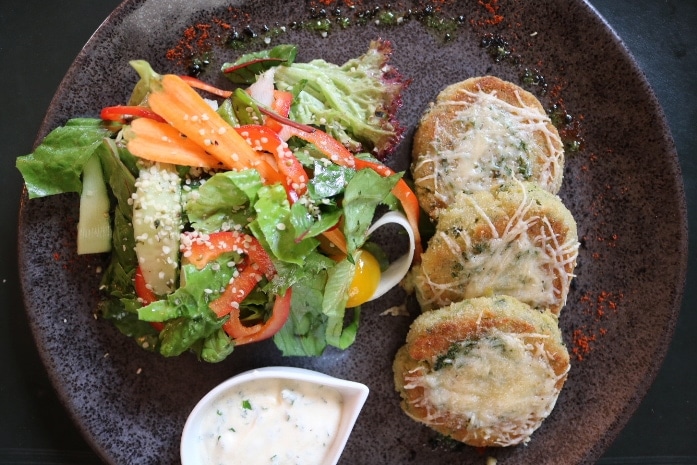 Vilnius is known for its towers, which offer amazing views of a relatively flat city. But the best known is Gediminas Tower, which stands on a small hill near the outskirts of the old town. 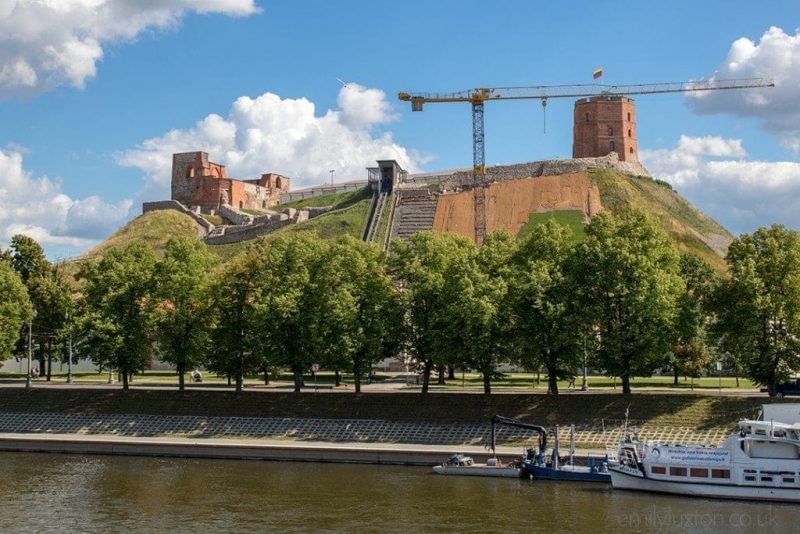 The castle itself dates from 1409, but there have been fortifications on the spot since the early 1300’s. Today, the castle houses a small museum (€5) and the panoramic views from the top of the tower are considered one of the best in Vilnius.

FYI – the tower and hill are currently closed for repair works, so double-check the website before you visit.

For a slice of local life in any city, it’s always fun to pop into a food market. Halės Market has been around since the 15th century, and today it’s housed in a beautifully restored brick building dating from 1900. It’s probably not the most impressive market you’ve ever visited, but it is a great place to pick up some local food like cheeses, cured meats, and baked goods. 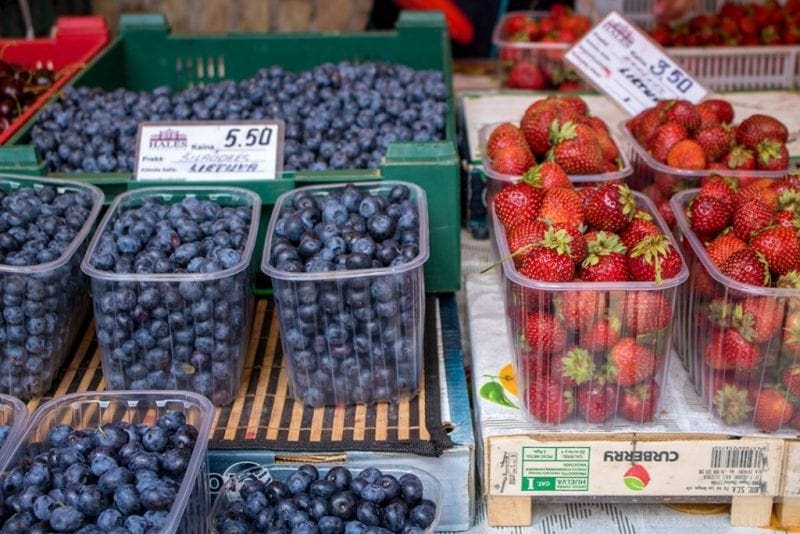 Check out the Chocolate Furniture at AJ Sokoladas

Don;t miss the chance to pop into chocolate shop AJ Sokoladas on Pilies Street. Their cafe is on point, with excellent chocolate goodies and pastries. But more excitingly, the shop has a small display of furniture made entirely of chocolate. We’re talking fireplace, table and chairs… it’s pretty impressive! 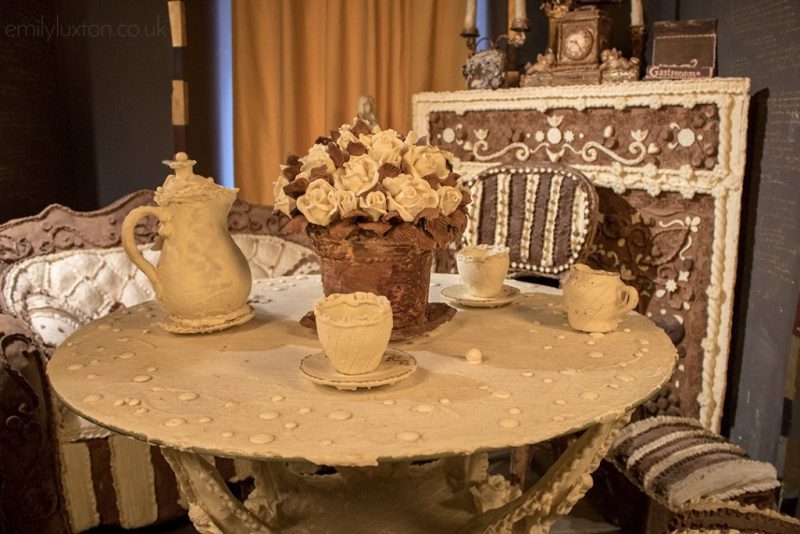 If you’re looking for some of the more unusual things to do in Vilnius, this one is for you. Just north of the Neris River, on Olimpiečių Street, is the abandoned Soviet Sports and Culture Palace. Built in 1971, the stadium is a striking example of Communist Modernism – and today it looks weirdly out-of-place. Many consider it an eye sore, but it’s an undeniable reminder of the scars the Soviets left on the country. 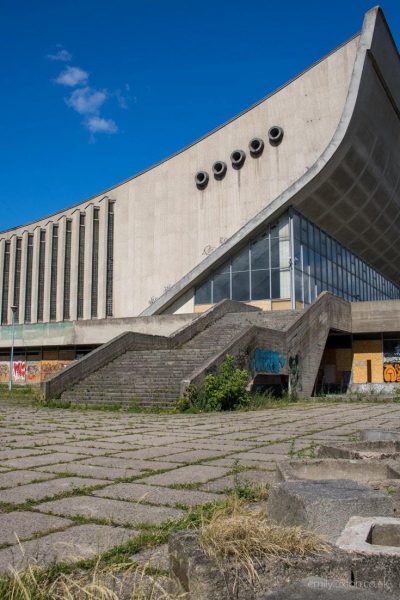 Sunset at the Three Crosses

Perched atop the highest hill in the city, the Three Crosses offer one of the best views of Vilnius. They are also considered one of the best places to watch the sunset in Vilnius. But in actual fact, the hill faces south and there’s a forest which blocks most of the sunset – you’ll be able to watch it filtering through the trees instead. What’s impressive up here is the view of the city itself, a sea of red-roofed tiles under the pinks and purples of the changing sky. 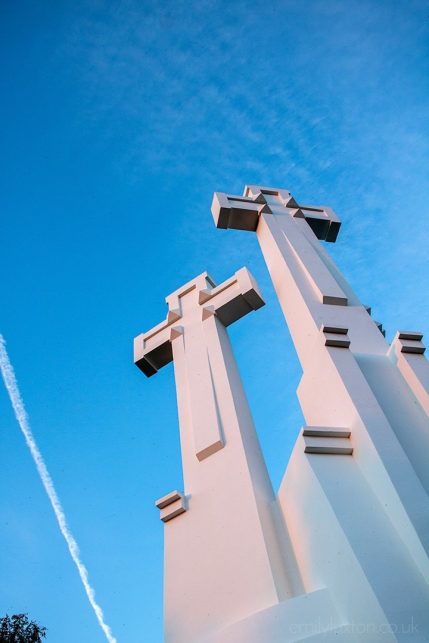 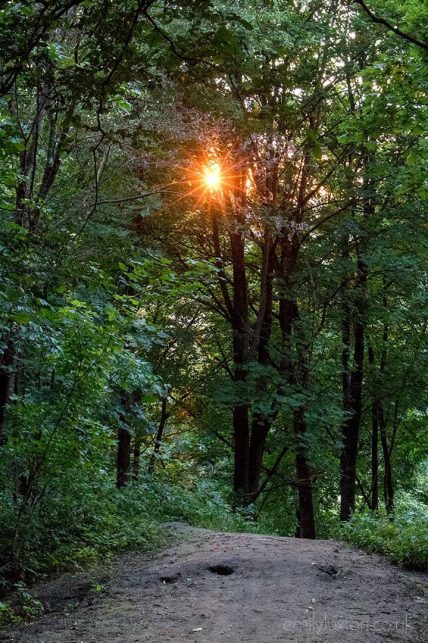 Have I missed any of the best things to do in Vilnius? Don’t forget to leave me a comment with your top tips!