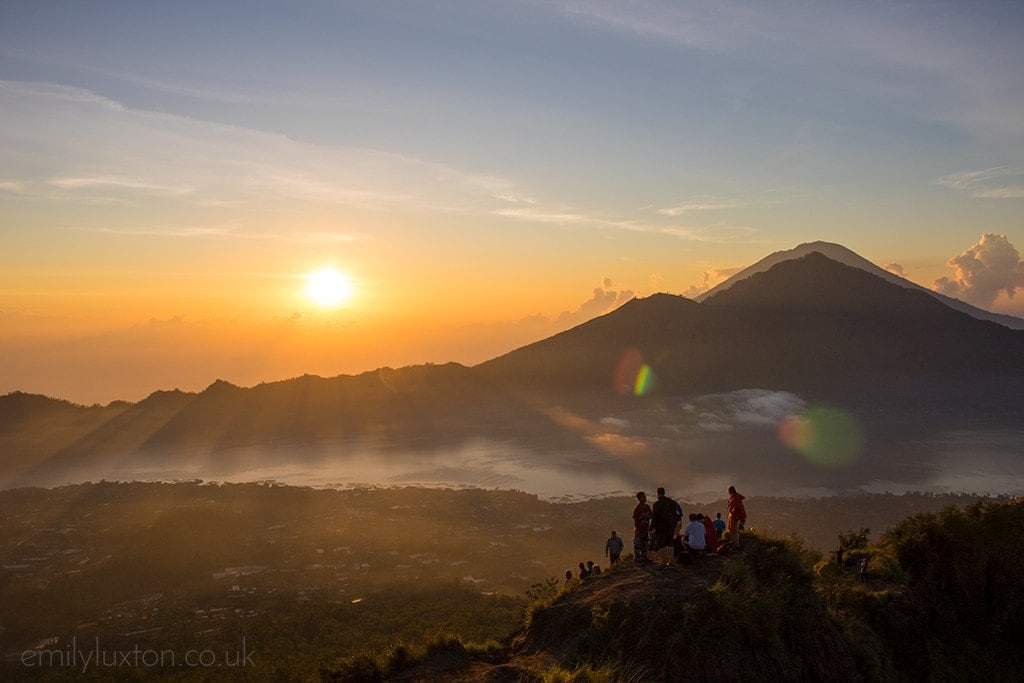 At two am, I am woken by the unwelcome sound of my alarm, the vibrations screeching painfully on the bedside table. Mount Batur is beckoning from across Bali – a looming threat I don’t think I can face.

By two fifteen, I am in a car. Puffy, pale, blinking confusedly. Growling at Chloe and Macca, who are mercilessly cheerful in the back seat. At four twenty-five I am walking in the darkness through a dense forest. The sweet smell of pine, the milky light of the moon. A surreal dream.

Some time around about five am, I think I’m going to give up. Every single bit of my body hurts. My chest hurts, each ragged breath of cold air hurts. I think I am about to vomit. I’d be crying if I had the spare breath and energy to sob. I look at the looming blackness of hill above me, still impossibly high, and admit out loud that I’m not going to make it.

But at some time just before six am, I am standing at the summit of an active volcano facing the most perfect sunrise I’ve ever seen. I have done it. 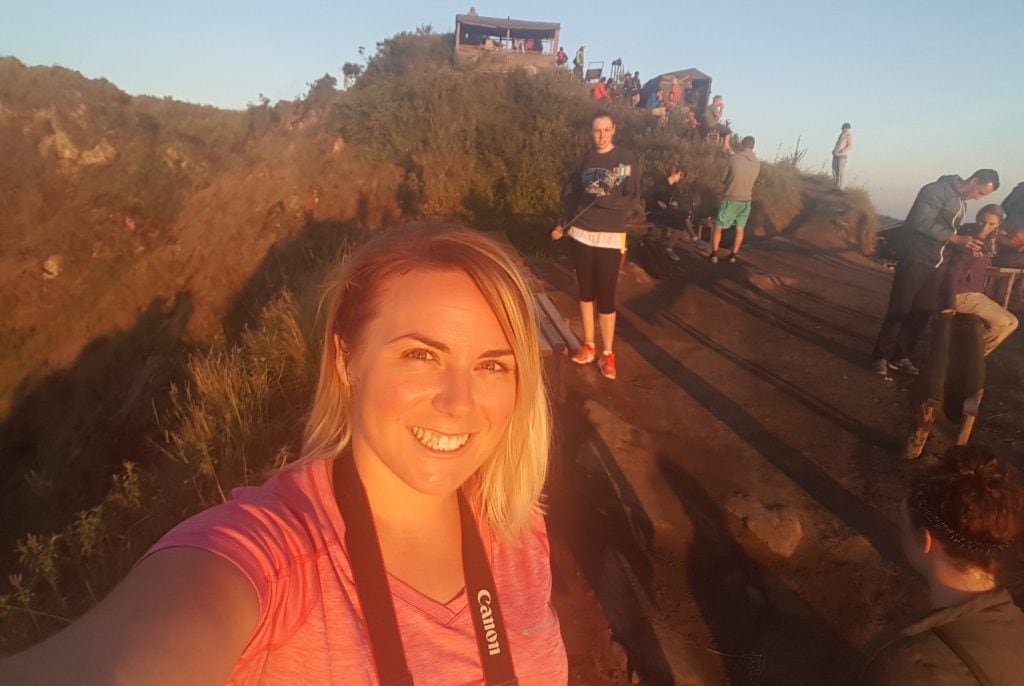 My sweaty, happy face after reaching the top!

I’m not exaggerating when I say this was the toughest thing I’ve ever done. Despite my best intentions and occasional bouts of “doing something about it”, I’m pretty unfit. While I can walk all day without complaining if it’s relatively flat, hills are my enemy. And this wasn’t just any old hill – this was a horrendously steep, rocky path to the summit of Mount Batur, a 1717m high volcano.

Closer to the top, we were walking on ash; thick, dusty grit that sank beneath our feet, so that with every step forwards we skidded half a step back. We had to half-scramble in places, and drag ourselves over awkward rocks. It was a tough hike – especially if you’re not particularly well prepared for it.

The Batur Volcano Sunrise Trek in Bali is a popular climb. And all things considered, it’s relatively easy. You start at around about the 1000m mark and hike up the remaining 700m, in the middle of the night, to watch the sunrise from the summit. The are several paths up (apparently we took the hardest one) and dozens, if not hundreds, of companies offering organised tours and private hikes with experienced guides. This is, after all, one of the most popular things to do in Bali. But that doesn’t mean it’s not a challenge, and for me it was the toughest challenge of the year. 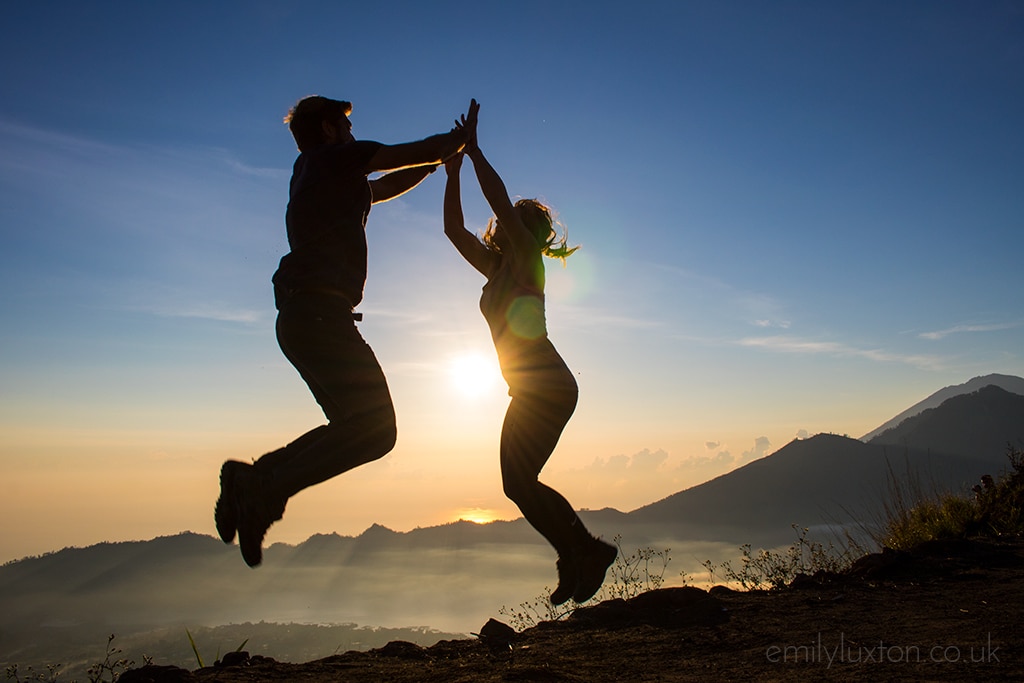 I couldn’t have done it without Chloe and Macca

Honestly, I would have given up. There was a real moment when I thought I had reached my limit and was ready to stop. If I’d been on my own, or with different, less encouraging people, I might have. But Macca, with his incessant motivation and irritating cheerfulness, literally wouldn’t allow me to quit. And Chloe, who was suffering almost as much as me, was there to support me.

And then there was Adi, our amazing guide, who held my hand when I wanted to stop and half dragged me up the mountain, and didn’t let go until I’d realised I was going to make it after all.

I couldn’t have done it without Adi. We definitely had the best guide on the mountain. A local from a nearby town, he’s been climbing Mount Batur since he was a kid – and now he does it every morning. He can, he told me, run-up in 36 minutes. But it’s not how fit he was or how well he knew the mountain, it was his spirit. The way he held my hand, distracted me with jokes, pushed me onwards with a constant stream of positive encouragement. 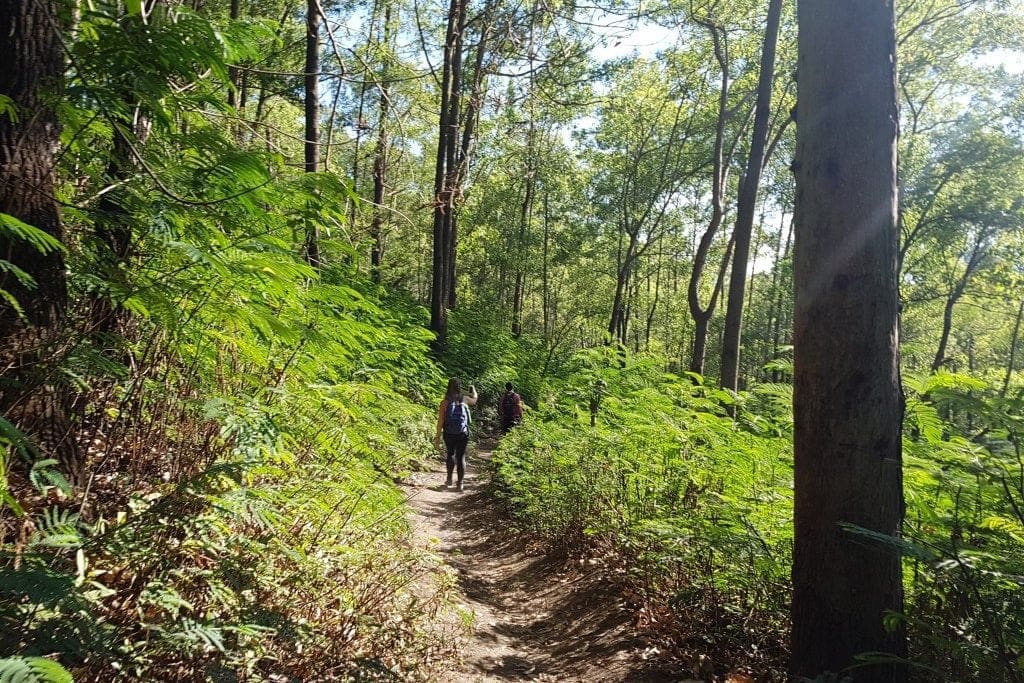 The way back down is through green woodlands

That’s one of the big bonuses of choosing a private hike of Mount Batur over a group tour. Having the guide all to yourself or to a group of friends means they’ll be able to pay a lot more attention to you.

It also means you don’t have to worry about keeping up with (or being slowed down by) a random group of strangers, or being embarrassed in front of them when you throw a strop halfway up the mountain because you think you won’t make it.

Reaching the top of Mount Batur, exhausted and dripping – literally, dripping – with sweat, was one of the ultimate highlights of 2016 for me. Although only a fairly modest challenge in the grand scheme of things, this didn’t come easily to me, and making it when I’d been so sure that I wouldn’t felt like a huge achievement. 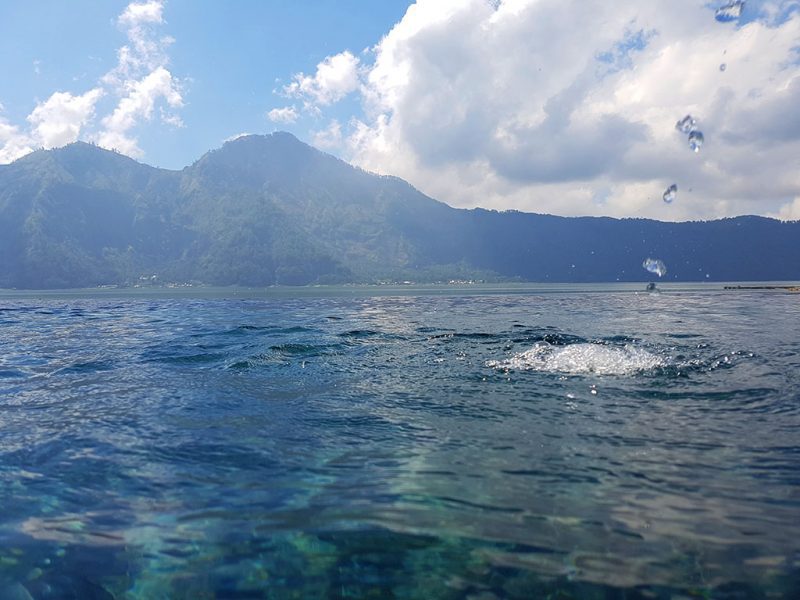 Hot spring pool on the edge of Lake Batur

At the top, we watched the sun appear in all its golden glory over the outer rim of the Batur caldera across the lake. One of the most spectacular sunrises I watched all year, it was made all the more special by just how hard-earned it had been.

Adi cooked us boiled eggs in the volcano’s steam, and we shared a picnic breakfast with some local monkeys. Then, after skidding and tripping our way back down the steep, ash-coated slopes, we headed to a nearby hot spring at Toya Devasya on the edge of Lake Batur to relax our aching muscles.

By 10am, we had climbed a volcano, eaten breakfast, watched a sunrise, and been swimming. It was easily the most productive morning of 2016 for me, and the most emotionally tumultuous. But what remained when it was over was the feeling of pride. Pride in myself for not giving up, for making it. And it’s that sense of achievement, however small, that made this one of my highlights of 2016.

My Tips for the Mount Batur Sunrise Trek

Go to bed early. Two hours of sleep do not a hiker make! Don’t be tempted to stay up till 2am and skip sleep altogether, either; I met a few people who did that and it didn’t work out for any of them.

This is not an easy hike! The early start and lack of sleep are just the start. The path up is steep, and slippery; towards the top it’s all loose grit and dust. I’m not particularly fit, but I’m also not exactly unfit, and I struggled to the point that I almost quit. So, be warned.

You can always ask to start earlier if you think it might take you longer than most people to climb. 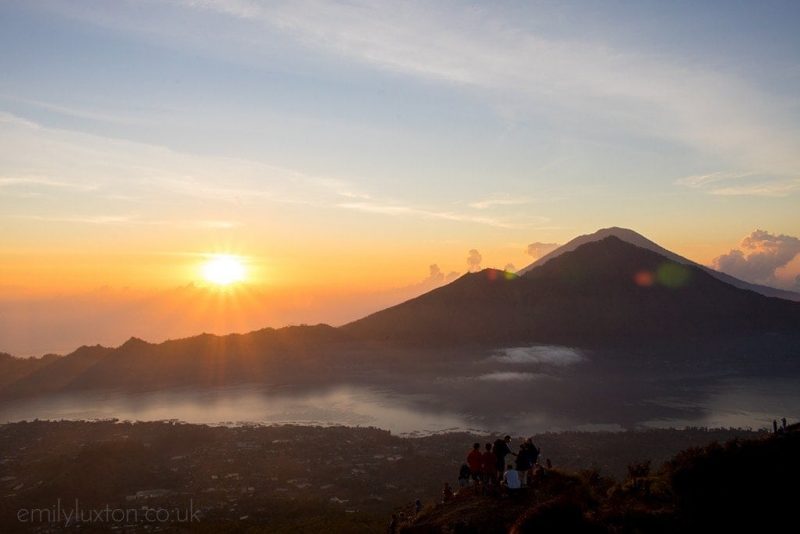 Mount Batur is a popular tour in Bali, so at the top it’s usually pretty busy. Taking a private hike can mean a quieter experience as guides often choose a different path up to the one most tours use.

It’s chilly when you set off – you’re at altitude and it’s the middle of the night. But you’ll warm up as soon as you start walk, and once the sun is up it gets much hotter.

What to Pack to Climb Mount Batur

It is worth the extra money to add on the optional hot springs stop at the end. Not only will the warm waters be fantastic for your exhausted muscles, but you’ll be able to bask in an infinity pool with stunning views of the lake and volcano. Worth it! Don’t forget your swimsuit.

For booking tours and activities in Bali and the rest of Indonesia, I’d happily recommend Voyagin. I booked my Mount Batur private hike through them and the service was great. Plus it’s just so much easier booking online!

A full-day tour hiking to the top of Mount Batur with Voyagin starts at £28 and includes all transport costs, guides and breakfast.

Have you hiked Mount Batur? Share your experiences in the comments! 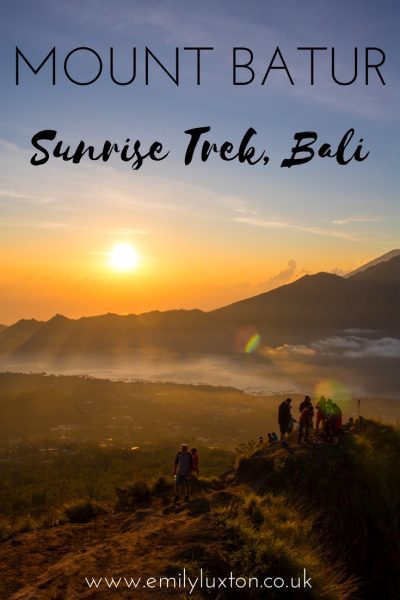 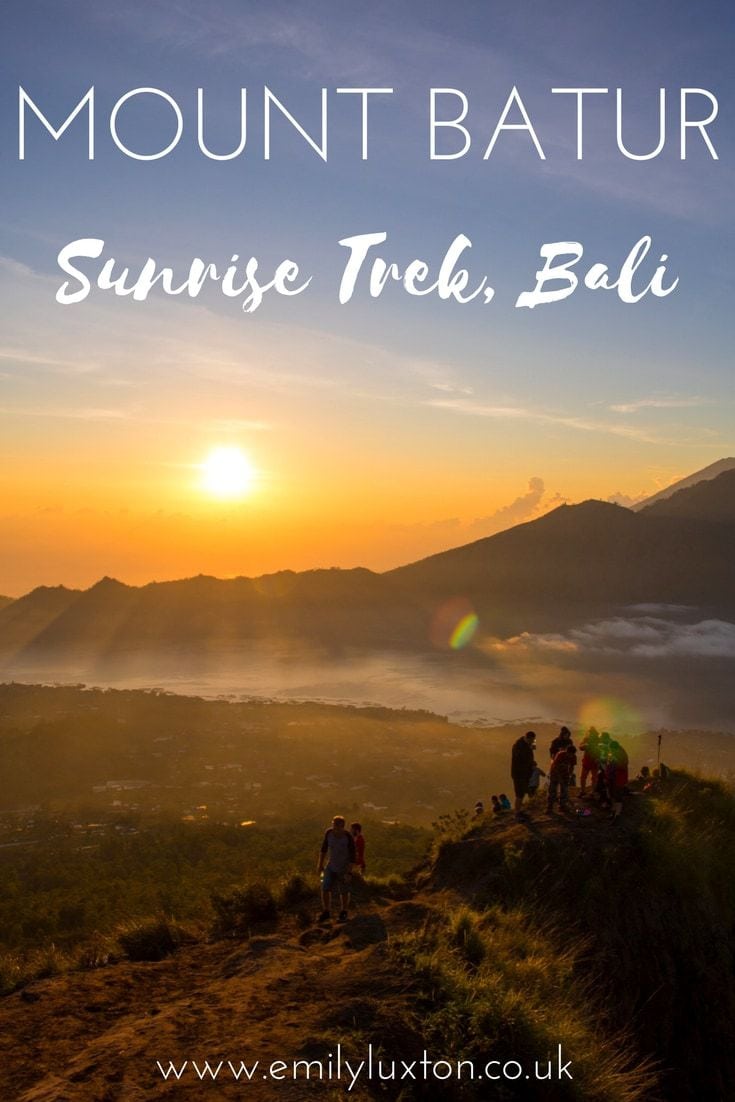 I was a guest of Voyagin on this Batur private trek. As always, all words and opinions are my own.

Also – some of the links in this post are affiliate links. They don’t affect the price you pay at all, but they do support the running of this blog!