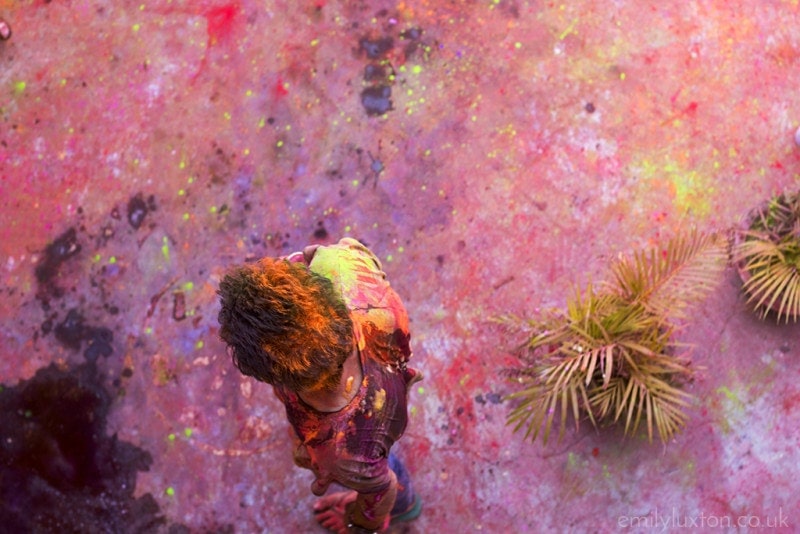 Drums are thumping through crackling speakers. A sea of bodies jumps into the air. Arms stretched, fingers pointed skywards, feet pounding the ground. A jet of red water flashes against the bright blue of the sky, seemingly suspended for a moment above the crowd before crashing down amid screams and whoops of joy.

Joy. That’s the overwhelming emotion attached to the celebration of Holi in India. It wasn’t even 11am yet, but people were dancing in the streets with the shameless jubilation that normally comes only with alcohol where I’m from. This is India, though, and we were in the holy city of Rishikesh – a dry city. Some people in the crowd had taken bhang – an edible form of cannabis cooked into pakoras or served in lassi – and a few may have snuck in booze from a neighbouring town (as we did), but on the whole, most people seemed sober. Sober, and filled with a joy so fierce it was palpable. And overwhelming. Most of us westerners hovered uncertainly on the edges of the crowd, not quite sure how to fully partake. 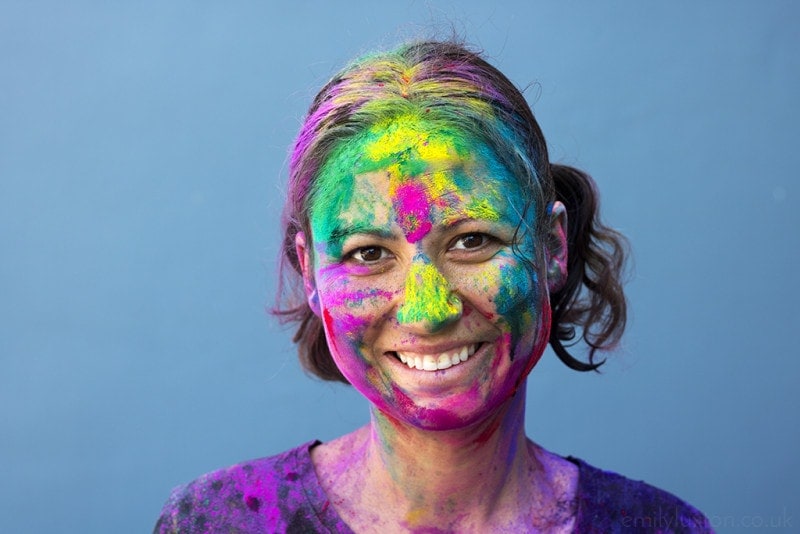 But the locals here in Rishikesh are welcoming. This is Holi, a festival celebrating the triumph of good over evil, as well as the end of winter and the arrival of spring. There was no place for differences; the throwing of colours comes from a legend about the blue-skinned god Krishna and his love for fair-skinned Radha. Krishna despaired that his blue skin would stop Radha loving him, so his mother told him to colour her face using jets of water. He did, making them equals, and the pair became a couple. Locals and tourists alike spent the entire morning in Rishikesh soaking each other with coloured water – attacking with water pistols, balloons, buckets, jets, and spray cans – and dousing one another with coloured powders, until we were all equals ourselves. 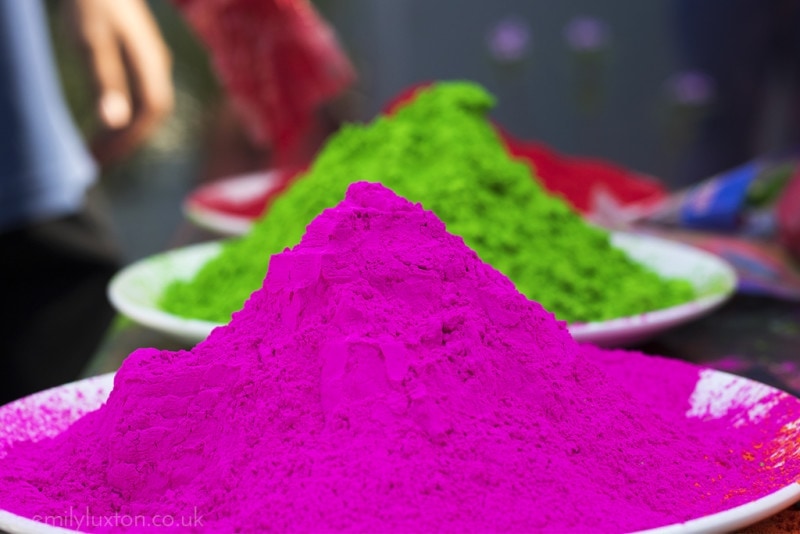 We started at 9am on the roof of our hostel, Bunk Stay, where the staff went amazingly overboard in initiating us into the spirit of Holi with plates of bhang pakoras, packets of fire crackers, coloured smoke bombs, and huge piles of coloured powder. It didn’t take us long to destroy the roof terrace, dousing everything in colour, and we emerged onto the streets of Rishikesh already covered head to toe in orange, red, green and pink.

The high street on our side of the river had become a war-zone. Shops were shuttered, and the attacks came from everywhere. Women emptied buckets from balconies overhead. Kids popped out from doorways and alleys, armed with water pistols or jugs or anything else they could find. As we cowered in a side street for a brief reprieve, refilling our own pistols at a tap, a local shop owner emerged with a plate full of snacks to share with us. Meanwhile, his young son toddled over holding a can, unseen, and emptied purple water down somebody’s legs from behind before scurrying away, wide-eyed with excitement. 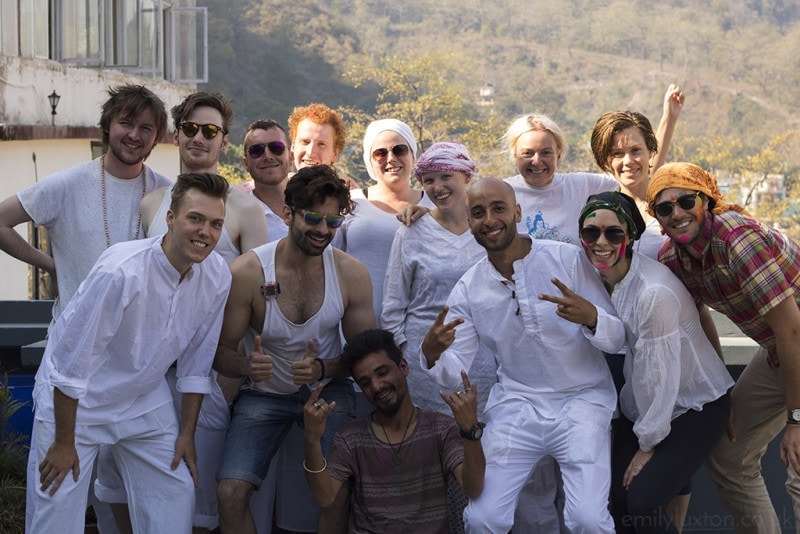 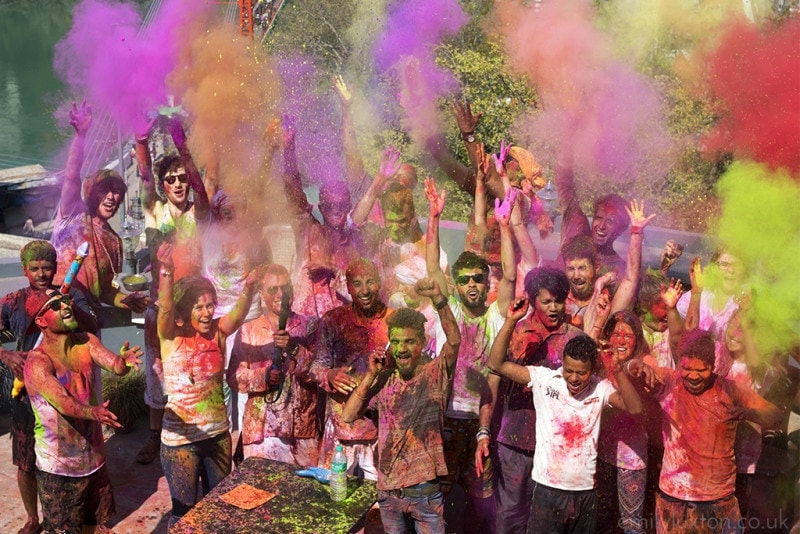 Although it’s a religious festival, there are no prayers or ceremonies on Holi itself. This entire day is about play – blowing off steam after the winter, ending conflicts and cleansing past errors, closing up debts, and most importantly celebrating. The more spiritual side of Holi took place the night before, with the Holika Dahan. In the market square near Lakshman Jhula Bridge, a huge bonfire was burnt as a symbol of the triumph of good over evil. The bonfire comes from a legend in which Holika, the daughter of evil King Hiranyakashipu, tricks her brother Prahlada – who is loyal to the god Vishnu and not his father – into sitting on a funeral pyre with her whilst she’s wearing cloak that will make her immune to fire. Lord Vishnu saved Prahlada and instead let Holika burn, then killed King Hiranyakashipu – and this story of good defeating evil is what gave birth to the jubilant Holi festival. 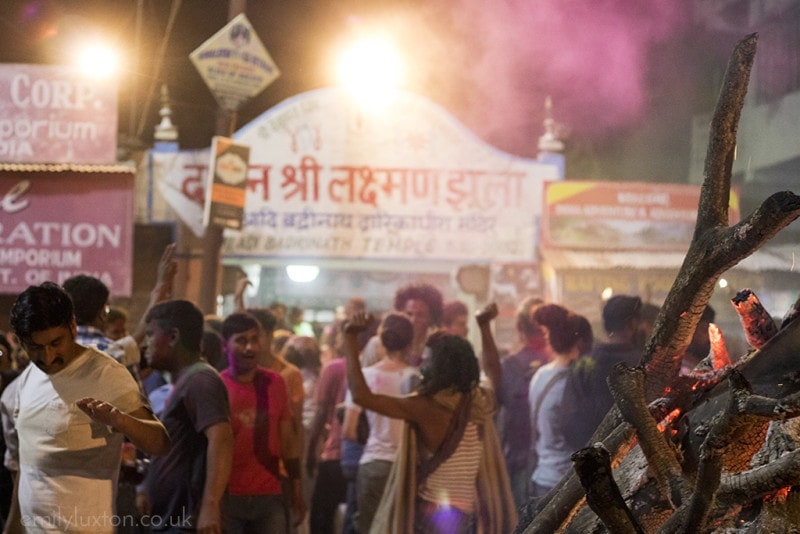 As the bonfire burned, locals danced to songs played by a DJ somewhere in the square, and coloured each other’s faces with powder. Our group of white tourists proved too much of an excitement, and within the space of an hour or so I’d taken about fifty selfies with locals. My face and hair were covered in colour, and I’d shaken hands with almost everyone that laid eyes on me. On the other side of the Ganges, on the riverside steps behind Freedom Cafe, the festivities were a lot more relaxed. A knot of locals were playing instruments and singing beside another enormous bonfire, and both locals and tourists were sitting around the steps, watching the glowing embers of the furnace rise into the night sky, reflected amongst pools of coloured light on the inky Ganges.

The night of Holika Dahan was calm in comparison to the chaos of the following morning. I spent the whole morning posing for selfies – it’s almost impossible to say no – receiving hugs, shaking hands, dancing with locals, having my face coloured, and being drenched over and over. It was messy, it was intense, and it was utterly insane – but it was so much fun. 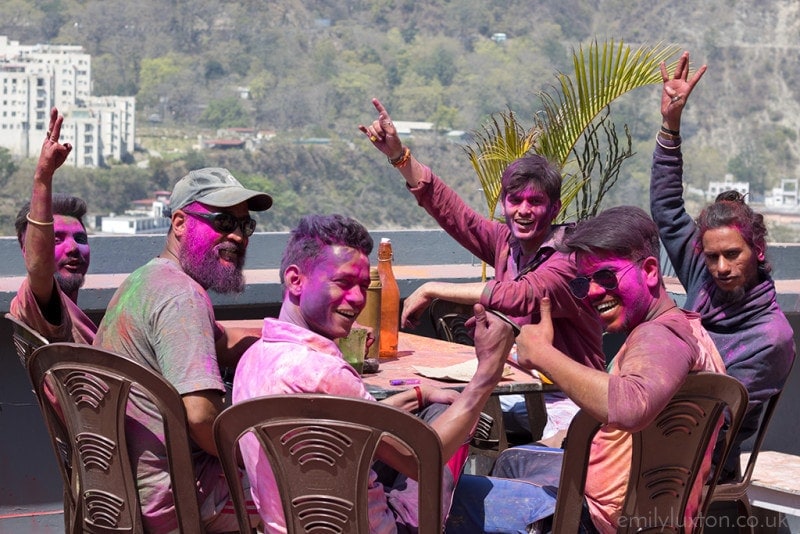 Holi wasn’t entirely play for me, though. Female tourists have a very different experience of the festival to men, because there are Indian men – both young and old – who simply take too much bhang or get too excited, and can’t resist the site of a white woman. I was hugged all morning, and while most of the time it was in the innocence of wishing me a Happy Holi, there were a few times when a hand slid towards my breasts – which I quickly learnt to guard with folded arms – or my bum, and twice my neck was kissed, my angry shoves met with gloating laughter. Thankfully, the many kind, welcoming locals we met far outweighed the few sleazy guys who tried to spoil things, but it did add a bit of a taint to an otherwise fun and joyful day.

By the end of the morning, I was exhausted. My face looked like a Sesame Street character, and I was covered from head to toe in a layer of colour so thick that it took thirty minutes of scrubbing in the shower to get it off. Twenty four hours and two more showers later, I still have a few stains on my skin that might be with me for a while. The yellow and red patches on my feet and elbows aren’t the only way this festival left it’s mark on me. Never in my life have I seen so much joy from so many people, so much colour and fun and camaraderie. The memories of colour flying against the blue sky, of that little boy with his can, or of the sight of strangers dancing in the streets together, are ones that will stay with me forever. Thank you Rishikesh for welcoming me into your celebrations.

Read more: If you’re planning a trip to India for Holi next year, check out this great guide on how to plan and celebrate Holi for some top tips!

Keep scrolling for more photos from Holi in Rishikesh 2016…

But first, if you loved this post please pin it: 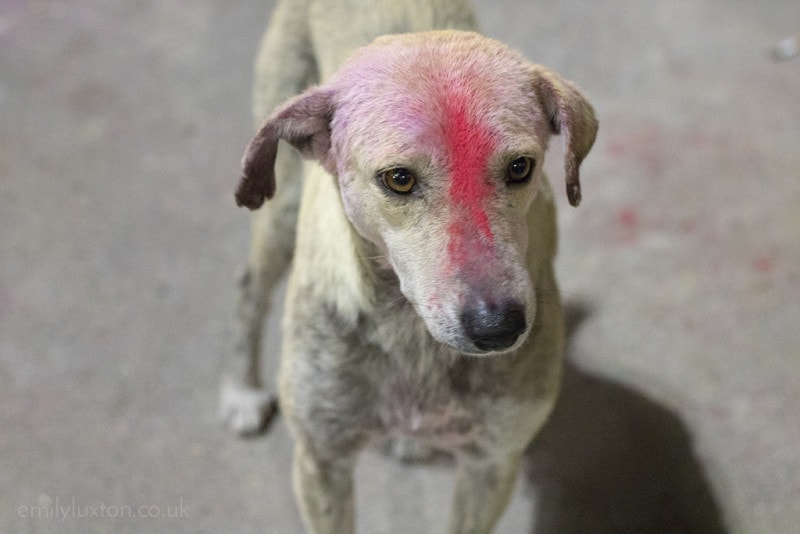 Not even the animals were safe. Local dogs, cows, and even monkeys were coloured! 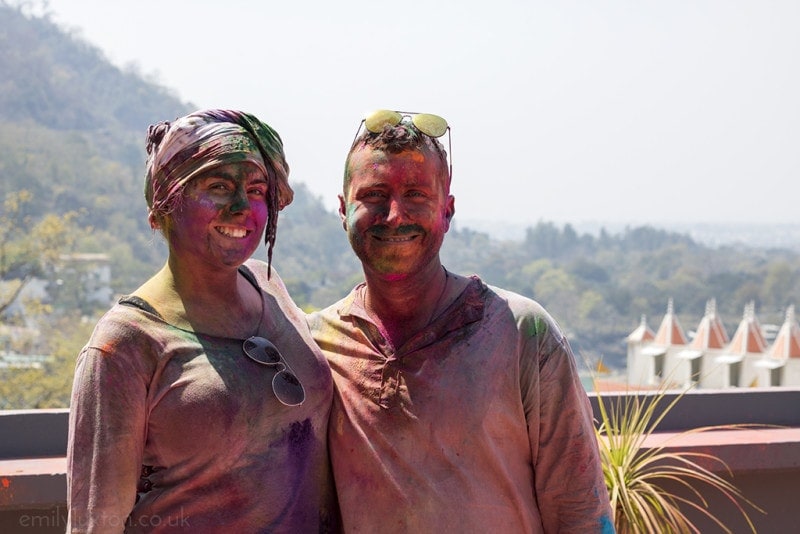 Me with my India travel buddy Brendon Vince (nerdtravels.com) after Holi! 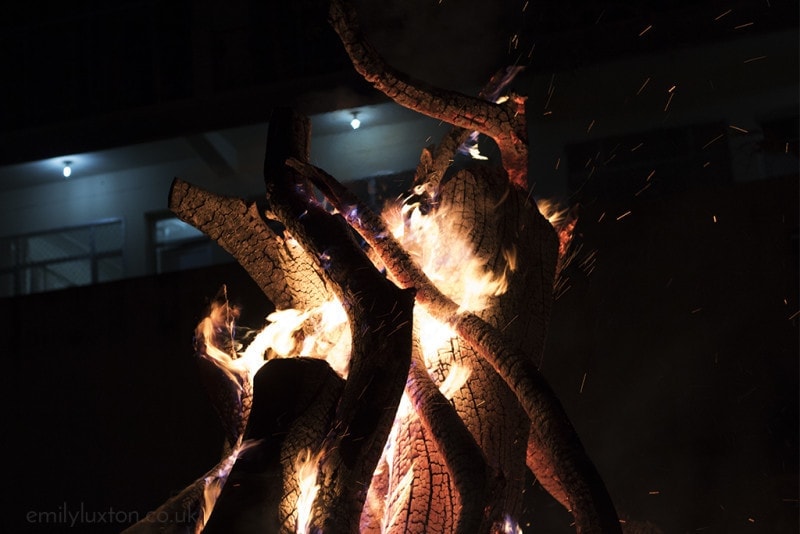 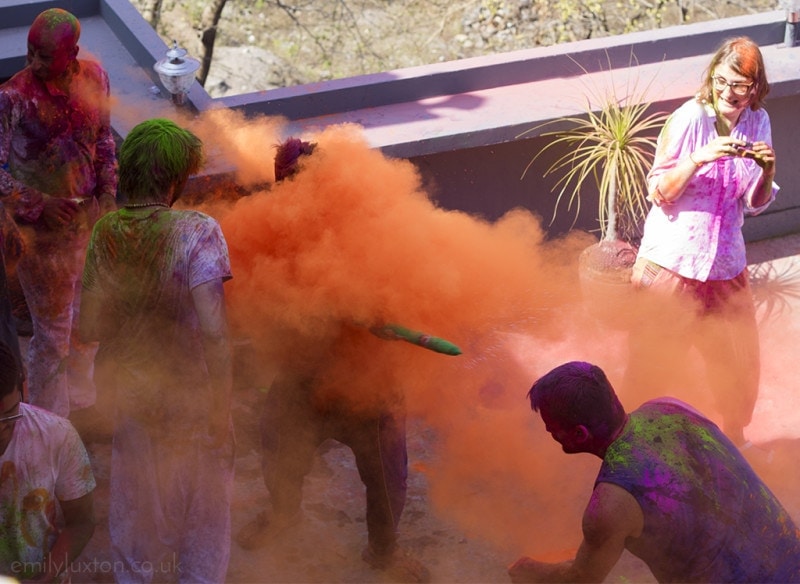 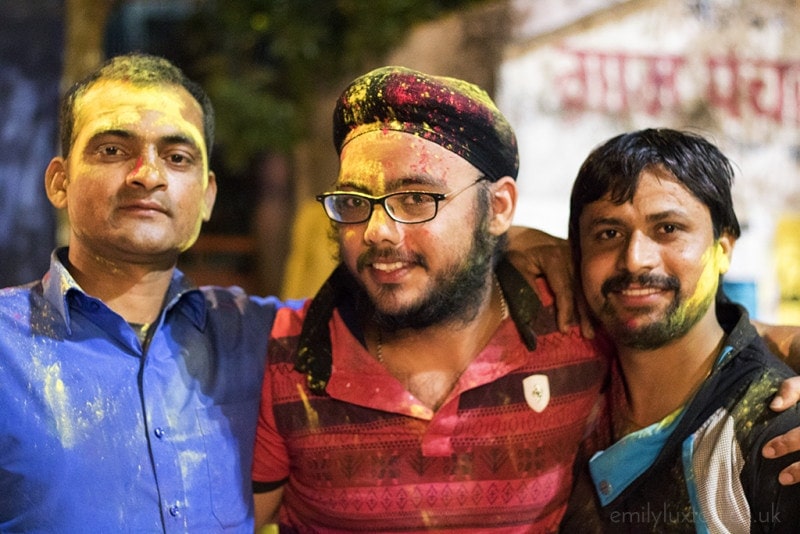 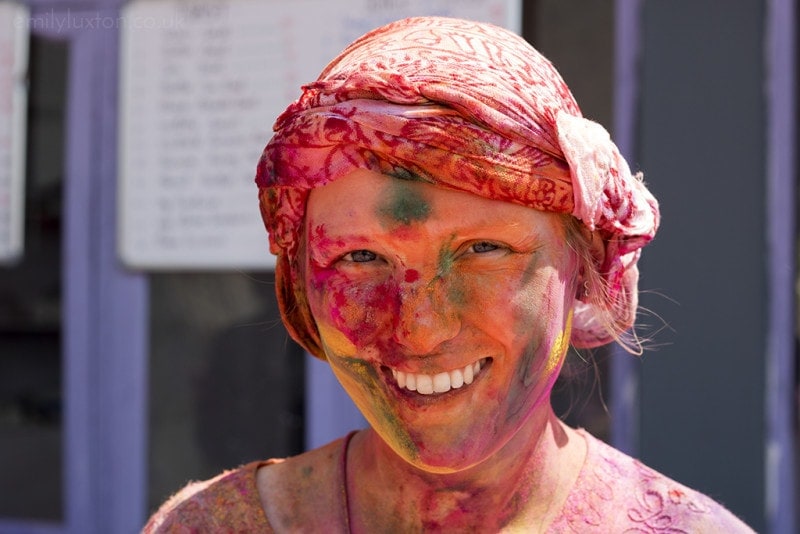 A friend of mine post-Holi! 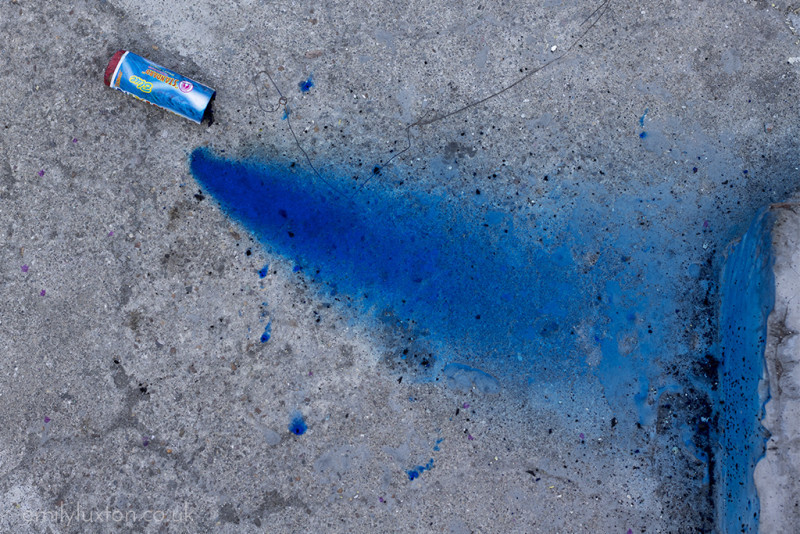 Aftermath of a colour bomb