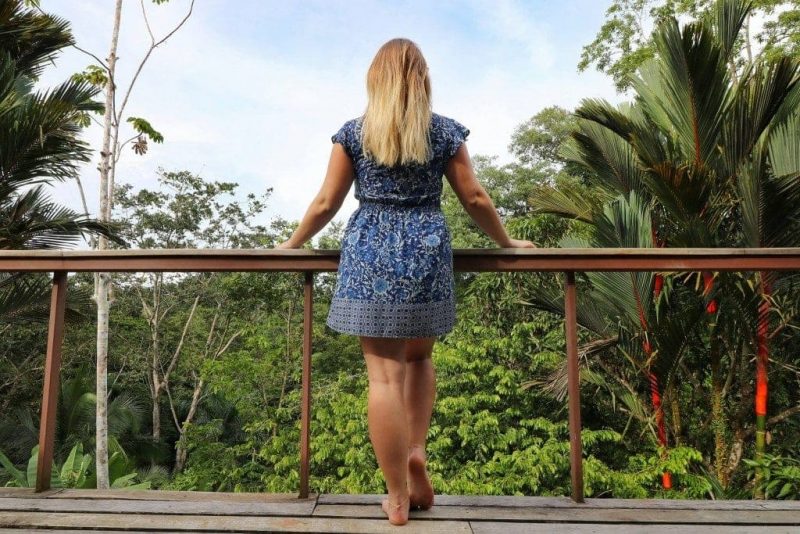 The faint grumble of my cab retreating up the gravel road behind me fades, and finally I am swallowed by the silence of the jungle. Except it isn’t silence. The air is pulsating with noises; bird calls, rustles, unidentifiable clicks and chirrups. I buzz the gate and wait patiently, struggling to become accustomed to the solitude. It is several minutes before I sense I’m being watched, and look up to meet the eyes of a raccoon who is snuffling at me from the top of the little gate house. I stand and marvel at our closeness, too busy admiring her neat little bandit face to even reach for my camera.

Jenny follows us up through the jungle to my home for the night – a large wooden cabin overlooking the forest canopy – and sets about making herself at home. While Eliese shows me around the property, Jenny pads about on her delicate paws, sniffing at my new pad curiously. Although her keen sense of smell and even keener sense of self confidence mean Jenny is perfectly capable of looking after herself, her blindness means that Puerto Viejo’s Jaguar Rescue Centre can’t fully release her back into the wild. But she’s as close as she can get, living at the La Ceiba release station deep in the forest. 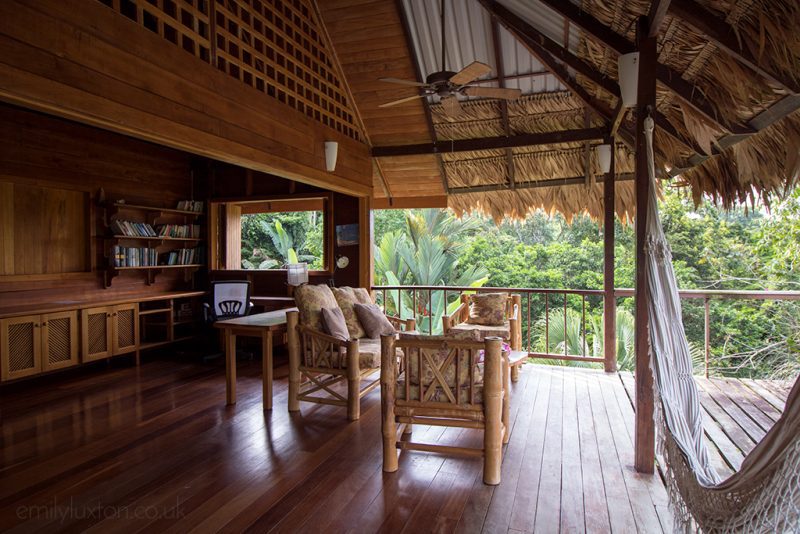 Inside my La Ceiba cabin

The release station was a later addition to the Jaguar Rescue Centre closer to town, which I toured a few days before. Despite the name, there are no jaguars – but plenty of other animals are calling the centre home on either a temporary or permanent basis. The centre aims to rehabilitate all their rescued animals – which include orphaned babies, injured animals, and illegal exotic pets. But when they can’t fend for themselves, the animals find a permanent home at the Jaguar Rescue Centre and are as well cared for as possible.

Down the road lies La Ceiba, the centre’s release station. It’s a couple of kilometres from the main road, right on the edge of the Gandoca-Manzanillo national park, and it’s the ideal transition point for animals due for release. 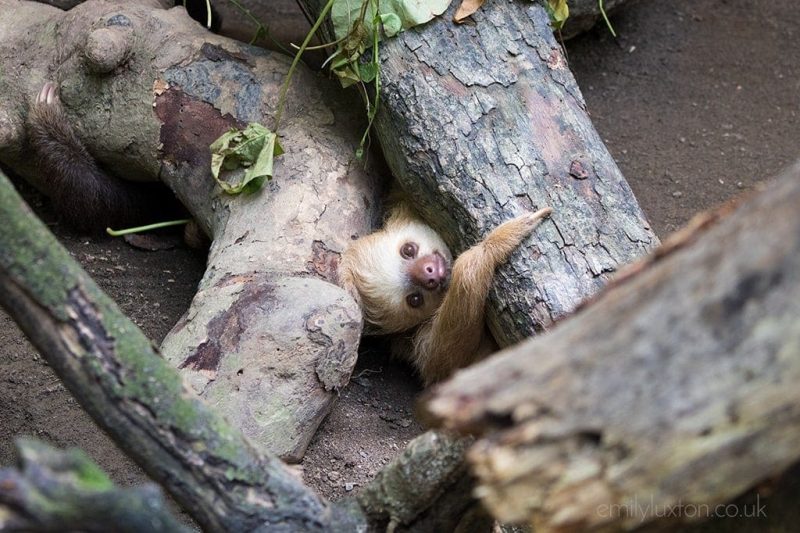 Eliese and Jenny set off back down the forest to the volunteer station, and I find myself utterly alone. It’s a pleasant feeling. My little cabin is completely open to the jungle, with glass-less windows and a huge balcony facing the nearby treetops. There is no door leading to the balcony; instead the whole front-side of the property is open. The kitchen, living room, and dining area are all exposed to the elements – and residents – of the jungle.

Alone in the Jungle

I sit down on the sofa and try to count the number of different bird calls I can hear. It’s an impossible task, but I’m interrupted fairly quickly anyway. A vivid green macaw swoops noisily down, perches on the wooden balcony rail a few feet away from me, and wolf whistles. The noise is unmistakable; a loud, clear, builder’s wolf whistle. I half expect a “hey baby” to follow. 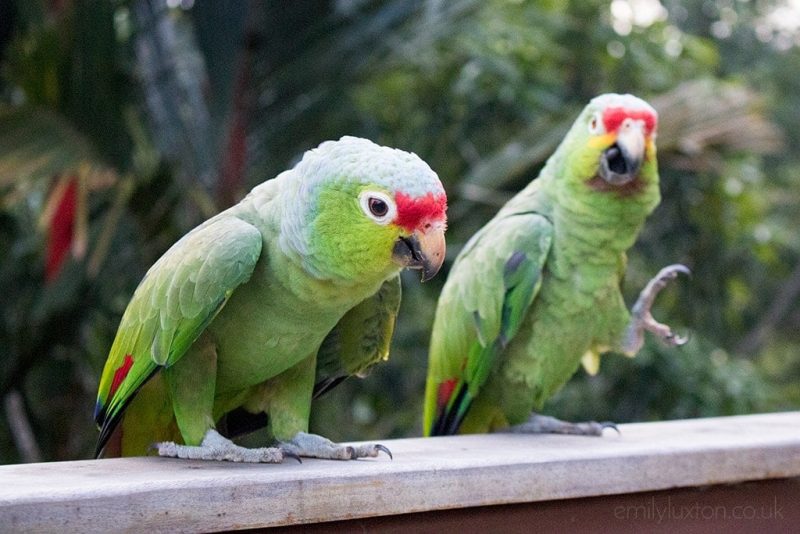 Edging nervously closer, again too busy staring to reach for my camera, I whistle back. The macaw whistles again, then ducks his head at me, looking distinctly proud of himself. I try again, and he copies again. I clear my throat and say “hola”. The macaw cocks his head, eyes me up, and says “hola” right back at me.

Grinning like a maniac, I throw myself enthusiastically into an odd conversation consisting only of greetings. Eventually, the parrot gets bored of my lack of vocabulary and flies away. But half an hour later, he’s back with a friend, and the pair are apparently very excited to teach me a new word.

They fluster down to my balcony, screaming on top of one another, with a mixture of walk whistles, clucks, and a bizarrely human sounding call. “Koo-ri-kooo”. When I try it out, the birds repeat it back again and bob their heads enthusiastically at me. We’ve made friends. This time, I have my camera ready so I film our weird little conversation, which goes on until dusk begins to fall and the love birds fly home together. 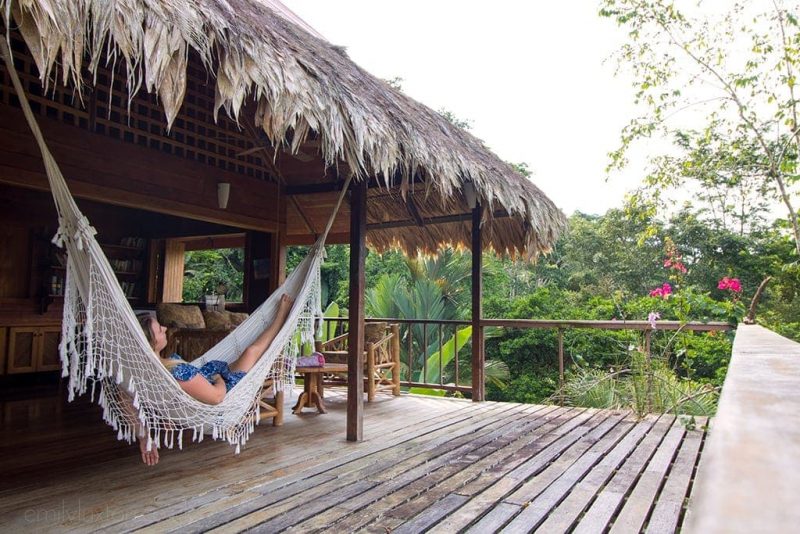 Left alone again, I lie in the hammock watching the jungle turn dark. As night falls, the bird songs are replaced by new sounds. A dense hum of crickets and cicadas, interlaced with croaks, ribbits, and rattles.

A few fat fireflies swirl lazily through the night. Moths and beetles flap about the balcony. A ghostly pale gecko creeps along the floor, fat fingers splayed. Sometimes an owl hoots. Every now and then, the voice of a volunteer drifts up from the centre below. But for the most part I am utterly, exquisitely alone with the jungle, wrapped in a bubble of animal noise, hibiscus perfume, and darkness. 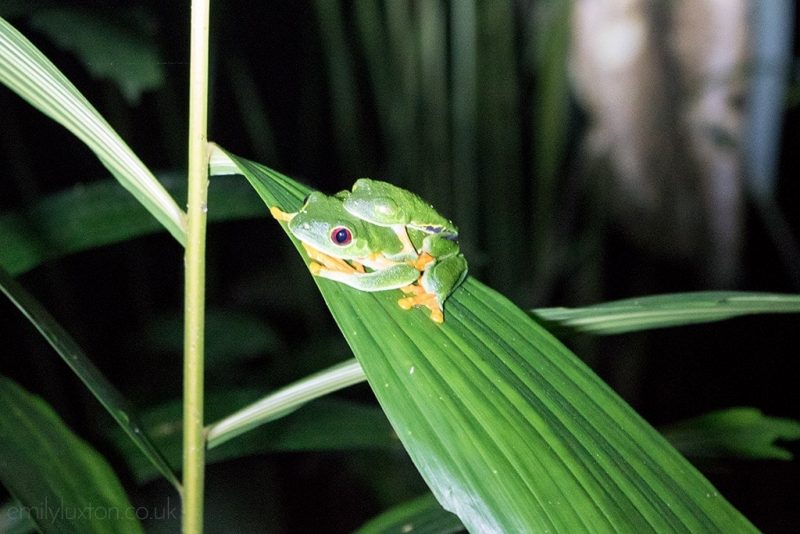 Dreamy escapes into the forest like this one are perhaps the best way to get the fullest experience of all the Jaguar Rescue Centre do. In town, you can visit the centre to find out more about what they do and to meet the current residents. But here in the forest you can see the release programme in action. Animals are kept in transition enclosures with a door left open, and can go out a little further each day to explore until eventually, they don’t come back at all. Self-releasing is an important part of the transition from rescue to release – putting the animals completely in control.

When I visited a few days before for the La Ceiba night tour, I came up close and personal with several of the centre’s smaller residents. Snakes, spiders, menacing bullet ants, turtles, and – of course – Costa Rica’s famous red eye tree frogs.  Sitting now with the jungle to myself, I recognise a few of the sounds that the La Ceiba tour guide introduced me to. There’s the plaintive hoot of an owl. The odd quacking sound of a gecko. And the unmistakable “plink” noise, exactly like a knife hitting glass, which comes from one of the resident frogs. 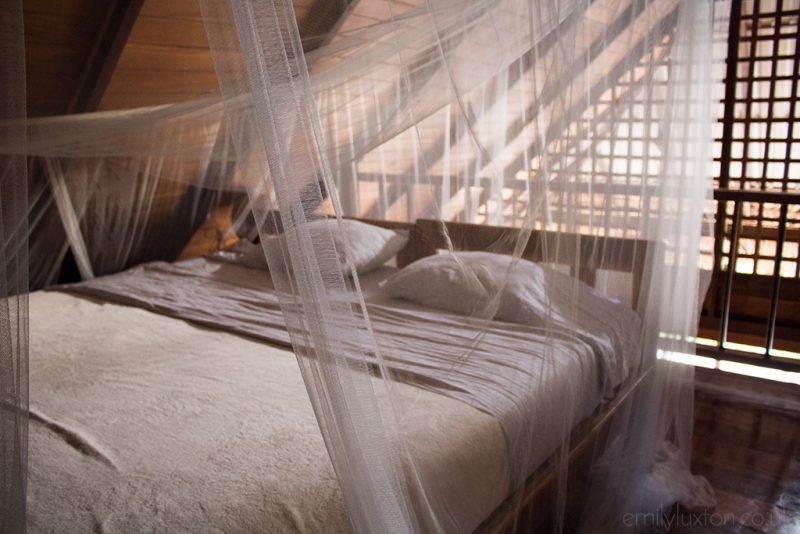 I wake in the morning to a chorus of angry barking. The local howler monkeys – some of them previous residents of the centre – are rioting through the trees outside my window. My wooden lodge looks all the more impressive by day, with a blanket of green draped around it. I make breakfast in the little kitchen and eat out on the deck, indulging in the leisurely solitude of the jungle. Even if I weren’t alone in the lodge – this is, after all, a fantastic getaway for a couple or a group of friends – the solitude would be palpable. Which is ideal, because everyone needs to get away from it all once in a while.

Click here to check the latest prices and book a stay!

Disclaimer – I received a discount on my tour and accommodation, but all words and opinions are my own. As always!