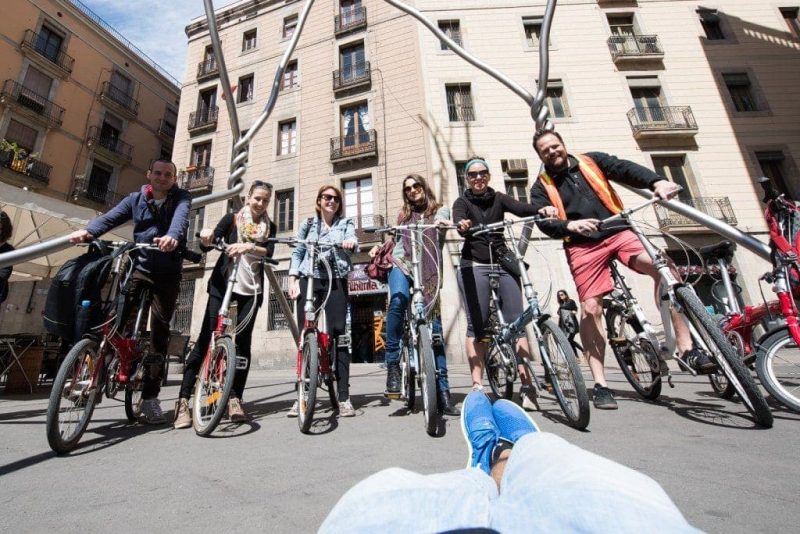 What’s the best way to get around an excessively busy city centre, where narrow alleys form a labyrinthine street plan filled with crowds of tourists? By bike, of course! A bike tour of old town in Barcelona may sound daunting, but while the streets are small, they’re also mostly pedestrianised and the whole area is pretty flat. So this is actually a great place to explore by bike, as long as you’re ready to dodge the unpredictably darting tourists.

I was lucky enough to win a free bike tour with Barcelona Experience while I was visiting the city. So, with a few other travel bloggers, I headed out on a bright and clear morning at the end of April to explore the city.

Read More: If you’re planning a trip, check out this awesome 3 day itinerary of what to see in Barcelona from Surfing the Planet.

We cycled, a little warily at first – across La Rambla and straight into the winding lanes of Barcelona’s Gothic Quarter or Barri Gotico, where the first stop was the Plaça Reial. One of the only plazas in the old quarter which actually was originally built as a plaza, the Plaça Reial is very uniform all the way around, surrounded by imposingly grand buildings. Gaston filled us in with a little of the area’s history, pointing out the famous six-branched lampposts designed by Catalunya’s favourite son, Gaudí. 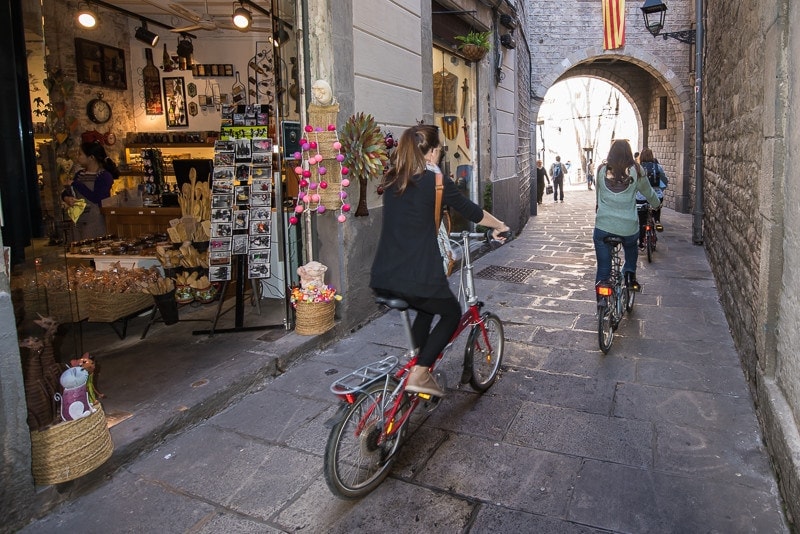 Gaston Magrinat, our guide and the company’s founder, was raised in the United States, but has been living in Barcelona with his wife since 1999, and has an infectious passion for his home city. He also had a ton of knowledge about the history and architecture of the old quarter, w 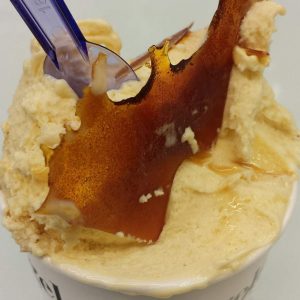 hich made the tour really interesting, and – more importantly – both Gaston and American expat J.R (our other guide for the day), were able to point out some great shops and cafés on our tour.

When someone points out the place to buy the best churros in Barcelona, it would be rude not to run straight in, looking marginally deranged, and buy a bag full. So, that’s exactly what we did – and they were divine. As was the Crema Catalana flavoured ice cream I bought at Gaston’s favourite gelato store, Gelaati di Marco on Calle Llibreterria. That one I can give you, but if you want to find the churros place you’ll need to take the tour yourself, as I have no idea where in the maze of the Barri Gotico it was! But that was the great thing about the bike tour with Barcelona Experience; the pace was relaxed and the guides were flexible, meaning we could stop for treats whenever we wanted. 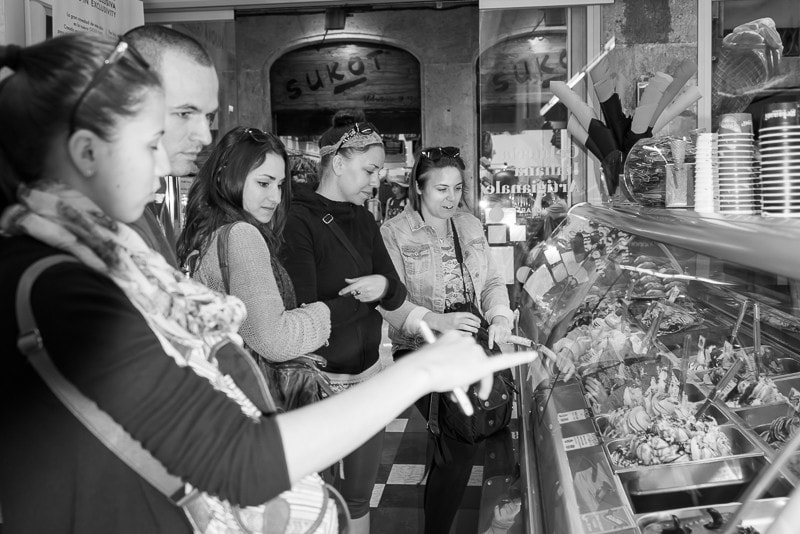 In spite of the churros break, we were lucky enough to reach the cathedral during visiting hours – and with a guide who knew about the secret side entrance, which helped us avoid some of the crazy crowds. Ok, it wasn’t quite as dramatic as it sounds, but the side entrance did allow for entry to the picturesque interior courtyard, a fourteenth-century cloister surrounded by a marvellous Gothic portico and home, bizarrely, to 13 geese. As Gaston explained, each goose represents one year in the life of the cathedral’s namesake, the martyr Santa Eulalia, who was tortured to death in the fourth century by the Romans because of her religion.

Read More: Nine Best Cities in Europe to Explore by Bike on Probe Around the Globe

After a couple of hours winding in a vague loop through the complicated maze of the old quarter, stopping at beautiful ancient churches and in m 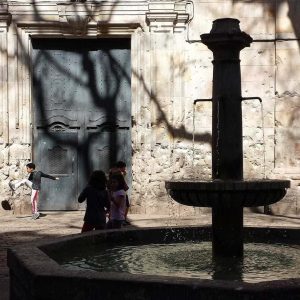 edieval plazas for all kinds of fascinating history lessons, we had basically covered no ground at all. That’s the thing about the Barri Gotic, it’s a small but seriously dense area where you could wander for hours and still keep finding new things. Experiencing that crazy neighbourhood, one I’ve visited on foot many times before, with knowledgeable guides and on bikes was a whole new way of seeing the area, and I loved it. But, I have to admit, the most fun came when we got out onto the wide esplanades that run alongside Barcelona’s beaches. Interestingly, this city didn’t even have a beach until the early nineties; during the huge redevelopment for the 1992 Olympic Games, the seaside area was converted into an exemplary leisure area and five new beaches were created. Now, Barceloneta Beach ranks among the best in the world! 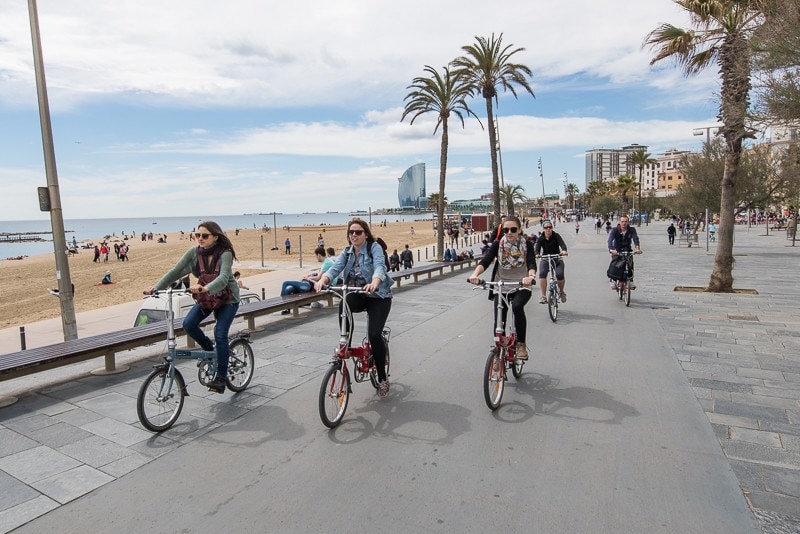 The bikes provided by Barcelona Experience were crazy light Dahon bikes, which were perfect for zipping through the narrow and busy street 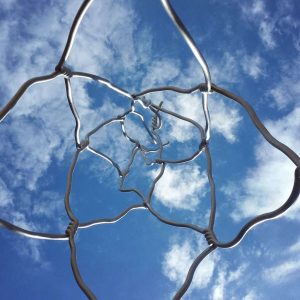 s of the city center. They were also super fast, making it a really fun ride when we got out into the more open space along the coast and could pick up speed. We sped along the beachfront, then turned inland once more to visit the beautiful Ciutadella Park – an enormous green space in the middle of the city which I never even knew existed – and Barcelona’s oddly named Arc de Triomf, an access gate built for the 1888 World Fair which doesn’t actually commemorate any particular triumph.

The bike tour with Barcelona Experience was so much fun, and in a few short hours we were able to take in much more of the city than I ever have on foot. Although I’ve visited Barcelona a few times, this was a great way to get to know the Barri Gotic a little better and learn more about the history of the area. Plus, I had a great time meeting other travel bloggers, and chatting with J.R and Gaston about their home city. 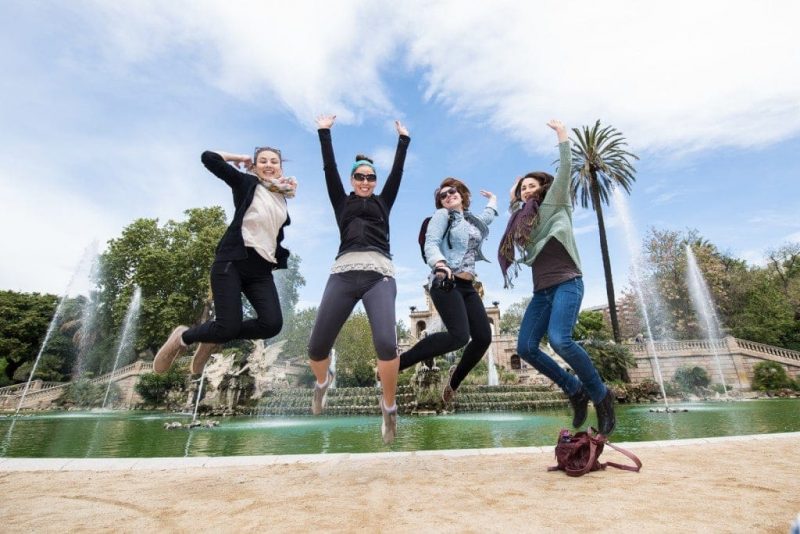