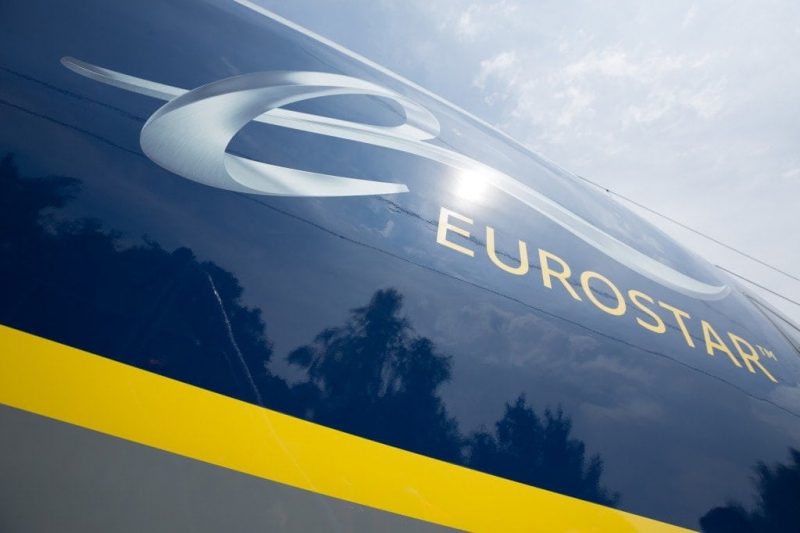 Trains have always been my favourite transport mode. I’m a big advocate for overland travel of any kind, but especially rail travel. It’s greener and more comfortable, and it allows you to see more of the countries you’re touring. You can look out of the window, you can relax or walk around, and generally travel overland feels more like “real” travel than flying.

Eurostar, now in their 20th year of operation, are an icon of European transport, bringing together England, France and Belgium via the Channel Tunnel since November 1994. It’s a fantastic way to travel quickly, smoothly and comfortably across Europe, and it still feels like one of the great iconic train journeys. I was lucky enough to travel with Eurostar between London and Brussels this month – and had a fabulous experience.

Why Travel Europe by Train

“But flying is so much quicker!”

That was the reaction I had from quite a few people when I told them I was travelling to Rotterdam by train, with Eurostar as far as Brussels and then on with Thalys to Rotterdam. As a lover of overland travel, of relaxing train journeys and of comfort over speed, I didn’t pay much attention. But, having now taken the journey by train, I’m not sure it is that much quicker to fly. 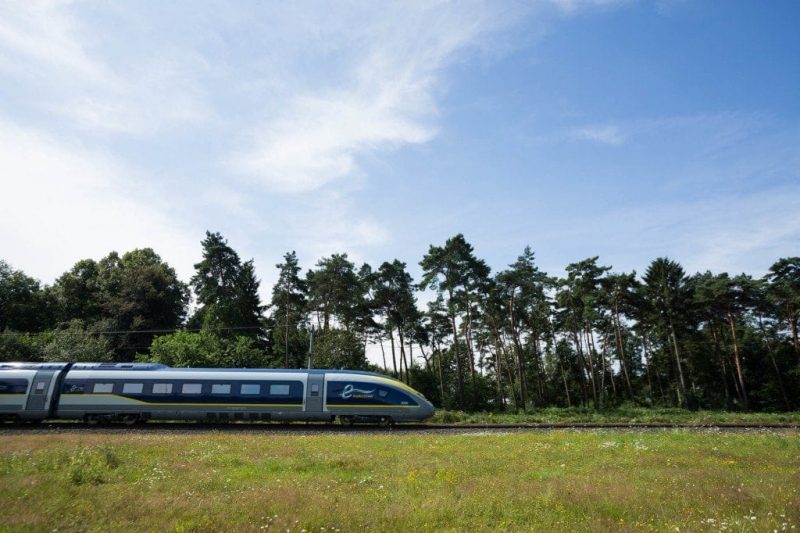 From central London, it takes 25 minutes via the Heathrow Connect stopping service or around 50 minutes by Underground (which is always my preference). You need to check in two hours before flying, and the journey time from LHR to Rotterdam is one hour. Assuming there are no delays, it usually takes at least thirty minutes after landing to get my bags, get through customs and get out of the airport – and that’s only if all things go to plan, which th 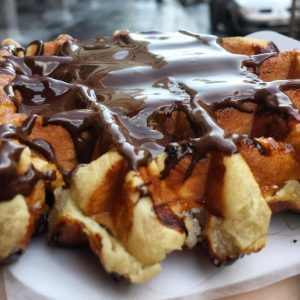 ey rarely do. Eurostar, on the other hand, leaves directly from Central London. I had to check in 30 minutes early, and the total journey time with both trains was three hours. The only slight downside to the train option was that I had to change at Brussels, but in actual fact for me that was actually a positive – as on the way home I was able to stop off in Brussels for three nights and add a whole extra dimension to my trip. Once I’d arrived in Rotterdam I was straight off the train with my bag and away. No customs, no impossibly slow luggage carousel, no waiting around whatsoever.

So, in reality the total journey time with Eurostar into Europe is at least the same, if not a tiny bit quicker, than flying. That’s one reason to choose rail travel over flying, but I can think of numerous others… 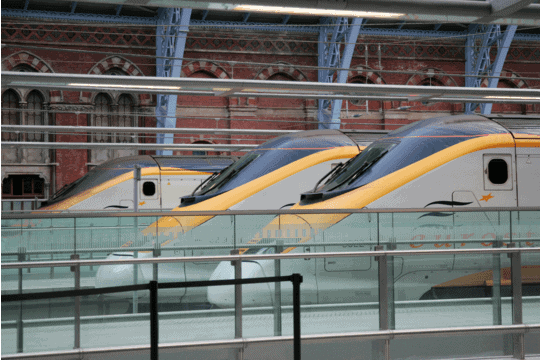 Just after Christmas, I arrived at St Pancras International with my luggage, grabbed a quick coffee and headed straight for the Eurostar check-in. With no hold luggage to deal with, the whole process could be automated; I just had to scan the barcode on my ticket (printed in advance at home – although you can download the app to get an e-ticket on your phone) at the check in gate, and head through into security. Which took less then two minutes. Given that each Eurostar has 750 seats, which is almost the same number as on two Boeing 747 planes, I had been expecting a lengthy wait at security, but in actual fact the whole process – whizzing my suitcase and backpack through an x ray machine, walking through the body scanner, and having my passport checked – was so quick and efficient that I was blown away. So much faster and easier than flying. I’m not sure if things always move this quickly with Eurostar, but it was the same story on my return trip from Brussels, too.

After check in, I waited in the departure lounge – where I was pleased to find decent shops, comfy leather seats, and free wifi to help me pass the time. Not that I had to spend long in the lounge, though; we were boarding in no time, again a very smooth and painless process.

On board, I tucked my foolishly big suitcase into the luggage area and once again found myself comparing my journey favourably with my normal flying experience – there’s no way I could have taken that suitcase onto a flight with me without paying extra baggage charges, let alone as carry on. I pushed it into the luggage area at the entrance to my coach and headed for my seat.

Again, so much more comfortable than flying. The seats were wider and better made than standard airline seats, and I loved that the edges of the head rest curved round slightly, giving me better support and a little privacy from my neighbour. Tray tables were much bigger than on board planes, there was a lot more legroom, and plenty of space overhead for my backpack and coat. Even for a standard ticket, the train was much more comfy than regular trains within Britain, and so much better than on board a flight.

We set off, bang on time, and less than two hours later I was in Brussels. I read on my Kindle, played on my phone – without having to switch either of them off for take off and landing – and looked out the window at the beautiful, sn 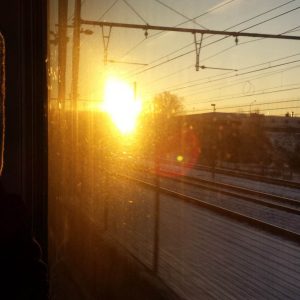 ow covered landscape of Belgium, glowing in the setting winter sun. It was a truly fantastic journey, and in Brussels I hopped straight off the train, luggage in hand, and headed for my connection to Rotterdam. There was no waiting, no queuing, and no delays – fantastic!

Service-wise, the Eurostar is one of those few travel companies that still treat everyone, even standard customers, like VIPs. Staff were on-hand to help and point me in the direction of my seat, and everyone I had contact with was brilliantly friendly and welcoming. It’s a comfortable and pleasant journey which I thoroughly enjoyed, and I was quite genuinely blown away by how much easier, faster and generally smoother it was than my normal flying experience.

Eurostar offer three tickets types; Standard, Standard Premier, and Business Premier. While my outbound journey was an ordinary Standard ticket, for the return trip from Brussels back to London I travelled in the Standard Premier coach – so I was able to experience both styles and see if it’s worth paying for the upgrade.

The short answer: yes, it is! 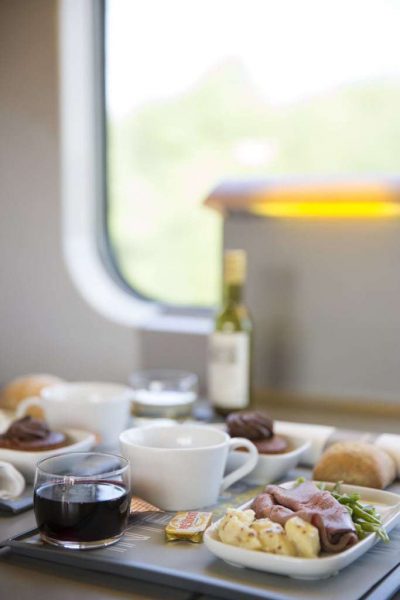 On board, in the dedicated Standard Premier coach, the seats were even more comfortable than on the rest of the train. They were more spacious, with vast amounts of legroom, and even reclined slightly for the perfect comfort level. Better still was the individual power socket at my seat – although I couldn’t find a UK socket, but that’s only a tiny gripe. There was a selection of complementary magazines available, but being halfway through a novel I didn’t need those, and throughout the journey the super attentive staff were on hand to assist and help out – all impeccably polite and friendly.

There’s a certain exclusivity to the Standard Premier coach, which made me really aware of the upgrade and feel very much that I was travelling in style. Things were more comfortable, a little quieter, and generally more luxurious than the standard journey – which had been by no means shabby!

Also included in the ticket price was a light meal and drinks. It’s a short journey, but the addition of some yummy food did make a big difference. We had a choice of two mains, and given that I’d already had lunch earlier I opted for th 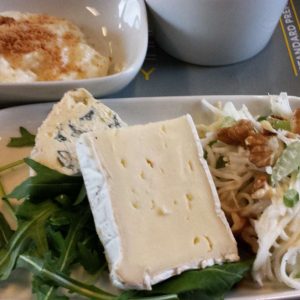 e cheese plate; a small plate with two cheeses plus bread – of which there seemed to be an unlimited supply – and a side salad. Dessert was a creamy rice pudding, which was divine, and it was all served with a bottle of water, a Belgian chocolate, a mini bottle of wine of my choice and an endless stream of coffee, all served right at my seat. It was similar to an airline meal, but classier – with metal cutlery (a touch that makes all the difference) and really nice, well thought out food. A brilliant way to make the most of the journey through Europe; cheese, bread, wine and chocolate.

Other than that, though, the journey was just as smooth as the outbound trip, and I arrived back in London feeling relaxed and well rested – very different to my cramped, stressed self when flying. 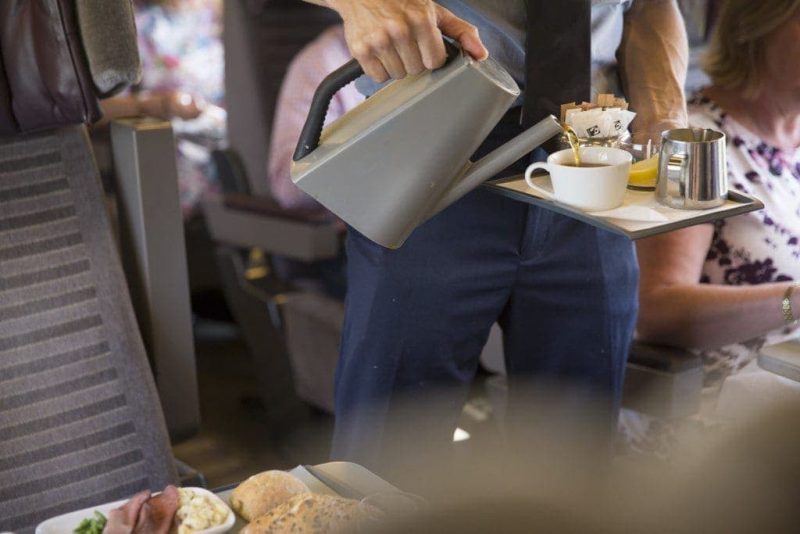 There are a lot of really great pros when it comes to travelling with Eurostar. Much greener, much less stressful and more convenient,  But what really surprised me about the journey, both ways, was how much easier, faster and more pleasant the whole process was than flying. Plus, with Standard Premier, I really did feel that I was travelling in style. By rail is the best way to travel Europe, and if you’re setting off from London you really can’t go wrong with the Eurostar.

Eurostar operates up to 9 daily services from London St Pancras International to Brussels with return fares from £69. Tickets to any Belgium station start from £79. Fastest London-Brussels journey time is 2 hours. Tickets are available from eurostar.com or 03432 186 186.

With the option of flexible fares, Standard Premier offers the freedom to work, think, or simply unwind. You will be presented with calm, spacious surroundings with on-board staff offering a light meal and a selection of magazines.