We ate so much incredible food across South America – especially in the Brazilian churrasquerias – that by the end of the trip my notepad was full of meals I wanted to look up the recipe for and make when I got home. Keen to learn a few of the basics before the trip had ended, I enrolled us both on a one day course at Cook in Rio; a tourist cooking class run by top Brazilian chef Simone Almeida at her popular restaurant, Fogo Carioca.

The class’s tagline “Learn to cook Brazilian recipes, then eat!” was all it took to sell me on the idea, so on one of our final days in Rio de Janeiro we headed down to Fogo Carioca ready to learn. Simone could not have been a better teacher – not

only was she full of information and great cooking tips, but she was also warm, friendly and very funny. She opened the lesson with a slightly confusing, but very entertaining, description of the Brazilian people – outlining differences between states, and impressing on us what a mix of cultures and races Brazil is – because, as she said, to understand Brazil’s food you have to understand it’s people. Like it’s people, Brazilian food is a mishmash of different influences, including African slave food, Portuguese, and native flavours, and it’s this mixture which gives the cuisine it’s impact.

We started off by putting together one of the two main dishes which we were lucky enough to make that day, Feijoada. Originally a slave dish,

this was traditionally made on Saturdays whilst the colonial masters were at work, with meat stolen from kitchen throughout the week and kept salted to preserve it. The process is started the day before, because both the pork and beans need to soak in water overnight (separately). We added the chunks of pork to a casserole dish along with beans, bay leaves and the juice of several oranges, covered everything with water and set it to boil. Citrus, according to Simone, helps your system to “fix fat” and aids digestion, so it’s really important in fatty dishes.

With the feijoada on a back burner, we moved on to some very simple appetisers of a grilled queijo coalho, a cheese from the Northeast of Brazil very similar to halloumi, but made with cow’s milk. These were served with a guava marmalade mixed with some chilli sauce and coated in lime juice. The cheese and marmalade tasted absolutely incredible, but once Simone doused everything in the lime juice it took the whole thing up a level. I loved that our small group of seven were all crowded around the same workstation, so that we could watch Simone work and take turns trying ourselves; it felt much more cosy and familiar than standing at separate stations – and we were in easy reach of the food!

Next up came a sauce made specially to eat with fried food, to “help your body digest the bad food”. It sounded perfect to me, and again it was so easy to make. Starting with diced onion – because onion makes everything fresh, and “if you have

fried food you need to lie to yourself, make it seem fresh” – we then mixed in coriander, crushed chillies, small yellow peppers called cumari (which were very hot) and lime juice to cook the onion a little, and of course to add the all important citrus to help digest the fat. So simple, but with so many perfect flavours and a seriously firey kick – just like a lot of Brazilian food – we ate this delicious sauce with bites of fried polenta.

After preparing the manioc flour – a traditional Brazilian side dish made from the flour of cassava with caramelised onions, parsley and chopped banana – ready for the main course, we moved on to the best bit: a lesson i

n how to make caipirinhas! These delicious, limy cocktails are the Brazilian drink and after sampling it across the country I was really keen to learn how to make the perfect caipirinha. Again, the recipe is pretty simple but very effective; for eight drinks we used five limes cut into pieces, and added a handful to each glass along with a blob of passion fruit (Simone’s “Rio twist” on a Sao Paolo drink),  and two teaspoons of sugar. After a quick mash, we topped the glasses up with ice and a generous serving of cachaça, and hey presto – the perfect, refreshing cocktail!

After our pre-midday caipirinhas, the logical thing seemed to be to keep drinking, so we continued cooking with a few rounds of beers for the group. Heading back to our feijoada – which by now was a striking, deep

purple – we mixed in fried onion and garlic to add flavour. Normally, pupils on the Cook in Rio class get to cook one of a choice of two mains, but since our group was divided Simone had allowed us to cook both, so we moved on next to what has to be one of the yummiest dishes I’ve ever helped to cook. Bahian Seafood Moqueca is usually made with a big mix of seafood, but since Sam is allergic we made one with just fish, instead. The recipe used sole marinated in lime, black pepper and cumin; coconut milk and cream; and red and green peppers sautéed in palm oil, which is what gives the stew its fantastic bright orangey-yellow colour.

Both dishes were served with manioc flour, and for the feijoada we also fried some collard greens with garlic. According to Simone, collard greens are “super healthy”, with tons of folic acid, and should always be eaten with beans. As good as the class was, the meal was even better. The feijoada was rich and heavy, while the moquecca was light, colourful and completely delicious. We even finished with a sweet treat Simone cooked up for us as we ate, spoonfuls of warm milky caramel. By the time we left, I was so full I could barely walk! 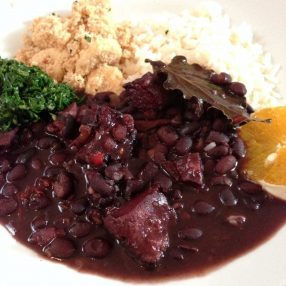 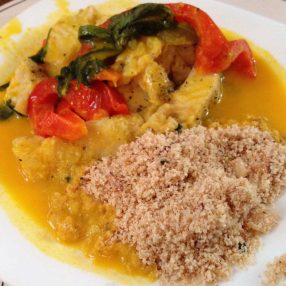 I learnt so much from our cooking class, not just the recipes but also a lot about Brazilian culture and about healthy eating. Simone was really funny, passionately enthusiastic and completely lovely, the restaurant was beautiful, and the food was just incredible. Even if you’re not all that into cooking, I really recommend this class as a great way to learn a bit more about Brazilian food and just have a lot of fun.

The four hour class is $75 US per person. Visit the Cook in Rio website for more information.