After so many awesome tours, cities, and sights of the last few weeks, our final day in Peru was a tiny bit of a let down, because we spent it taking a tour of the overly-touristy, disappointingly staged, floating islands in Lake Titicaca.

I’d been looking forward to Lake Titicaca , the highest navigable lake in the world, since reading about it in Motorcycle Diaries, feeling that it was the iconic way to cross the border, and although the enormous, bright blue lake surrounded by green cliffs and mountains really blew me away, the islands themselves were, sadly, were not particularly amazing.

Our tour started around 9am, although the boat didn’t leave the small port in Puno for at least half an hour. Eventually, though, we set off into the lake, which is pronounced Titi-ha-ha and means rock puma, passing the tall, straight reeds which are used to build the islands and almost everything on them.

We arrived at one of a long line of small, roughly-rectangular islands built from compacted reeds, and jumped on from the boat. The ground underfoot was strangely bouncy, although thanks to the placid lake we couldn’t really feel that we were floating. On arrival, we were greeted by the chief of that island, which has about six families living on it in small reed houses, and he helped our guide with a demonstration of how the islands were built, with the reeds being layered in alternating directions to create a thick grid. Apparently, these structures need maintenance at least twice a month, and we did see other islands being repaired or built up around the lake.

After the demonstration, the six ladies of the island divided us up into small groups and invited us, somewhat forcefully, into their homes. Sam and I, along with a Russian couple, went with a lady named Melissa, who was really sweet, but the experience as we sat on the edge of her bed and looked around her small, hut-like house was a little forced and very awkward. She dressed us up in traditional outfits so that we could pose for photos; a baggy, embroidered shirt for Sam with a brightly coloured wooly hat, and a big, yellow skirt, cropped pink jacket and wide-brimmed hat for me. It was good fun, but everything felt so staged and so well rehearsed, and all of it led to a big salespitch for numerous handmade jewellery, mobiles and tapestries (which we felt slightly compelled to buy), that it sort of spoiled the experience.

The most awkward part came when the six women of the village lined up to sing for us, all of them with thunderous, grimacing faces which clearly showed how little they wanted to. Afterwards, they shuffled around shaking hands with everyone, listless and bored, so that I almost couldn’t wait to leave. The best part of the day came when, for an extra S./10 each, we rode the gondola, a structure made from two reed canoes combined with a circular turret type thing to sit on, and spent the whole journey talking and playing with the two very cute, very shy little girls from the island.

Although it was nice to see the lake, we later discovered that the Bolivian side is much nicer, and the whole forced, touristy experience of the Floating Islands seemed like a bit of a waste of time and money.

We paid S./40 (about £8) each with Inka Tours, for a three-hour tour including pick up and drop off at our hotel.

Some posts on this site contain affiliate links. If you book or buy something through these links, I earn a small commission (at no extra… Read More »Arequipa Walking Tour 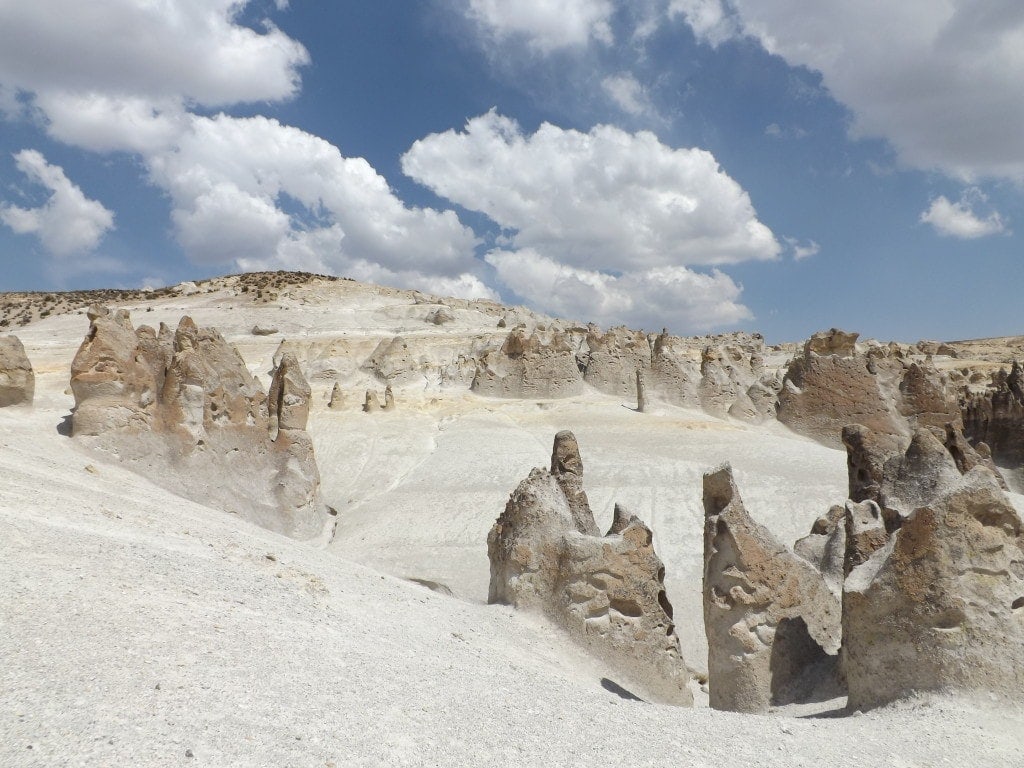 All about my Colca Canyon trek in Peru – three days hiking down into and around the canyon!